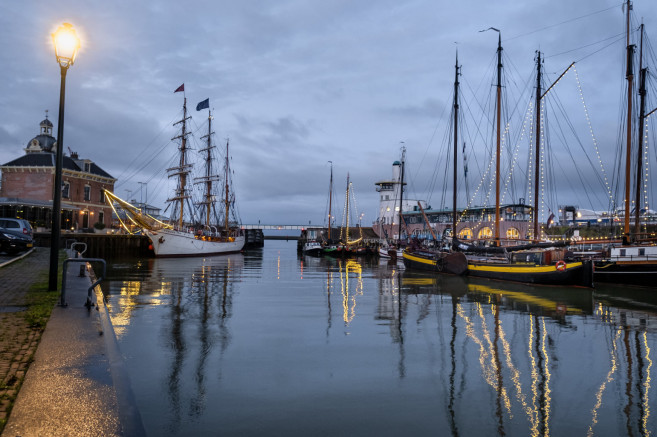 In the Frisian Dutch region, Harlingen, with his long history of seamanship, is still home port for numerous and varied assortment of boats, including sailing yachts, a good fishing fleet and many of the typical dutch flat-bottom ships. Traditionally built to sail mainly in the Wadden Sea, with no beam keel and shallow flat underwater areas, they are common on those shallow waters for which they are so well suited. They can also be easily be stranded in the sand banks that characterises this region.
But amongst all of them, a replica of an old sailing vessel from the 16th century, stands out. Moored alongside a canal in the town’s centre, she lays quite anonymously right next to the road and other boats, with her hull still in work-process, since it was started in 2011.

Actually it is an ongoing job done by volunteers under the supervision of the marine archaeologist Gerald de Weerdt, rebuilding the ship that the celebrated son of Friesland Wilhelm Barentsz used in his third and last expedition to the frozen northern seas and lands.

His was a well built boat for the time, but nevertheless she eventually couldn’t withstand the pressure of the pack-ice trapping her on the northern coasts of the Russian island of Nova Zembla, in a quest for the coveted passage from Europe through the Arctic coasts and channels to China, the so called North East Passage. During the trip Barents himself lost his life, but not before officially discovering the archipelago of Spitsbergen and Bear island. Both nowadays hosting a growing touristic industry, of which the expedition boats play an important role.

All the stories, adventures and misadventures would have been lost if it was not by the fortuity of finding part of his diary amongst several other remains in the hut they built in Nova Zembla after loosing the ship. Two of his crew members also published their journals, helping to reconstruct their odyssey in the ice.

Based on his own notes and the descriptions by the ship’s carpenter Gerrit de Veer, in 1598 was issued a detailed map of his travels, which sealed his famous name for long time to come. Amongst others, the former Murmean Sea was renamed Barents Sea, also the Russian mining settlement in Spitsbergen bears his name: Barentsburg.

His ship did not differ much from other contemporary vessels, suggesting that not all those wooden ships used for expeditions of discovery all over the world, including polar areas, were built specially for the occasion. Nowadays the ship building techniques used to build vessels like the Witte Swaen are considered outdated, after centuries of the method’s evolution. But we must remember that as unconvincing as it may look today for embarking on any large scale sailing adventure, it was such sort of boats that opened the gates for discoveries and to get an idea of the real shape of our world.

In comparison, the bark Europa looks pretty different, with her steel hull, larger size and more modern lines, ready to sail the seven seas and the coasts of all continents on earth. But originally she wasn’t either built specially as an expedition-ocean wandering-ship, but as a lighthouse on the Elbe River, however with a strong steel hull to deal with the harsh winter conditions of its waters. Her stout and solid hull launched for that purpose in 1911, still proves to support expeditions all over the world including the Antarctic continent.

There are no clear records of the name of this ship that Barents piloted over 400 years ago in his ill-fated third Arctic expedition. The replica in Harlingen is called Witte Swaen (white swan), that shows itself as a drawing at the stern.

This appellative could well be her original name, or may also well be due to an anecdote occurred during the voyage, when on 5th of June 1596 a crew member on deck shouted that he saw white swans, birds that after a closer look eventually transformed into drifting bergy bits.Whatever was the name with what she was baptised, sure she served bravely to her crew of adventurous sailors, when sailing into unknown polar waters until was eventually lost at sea crushed by the ice.

With its name, “ a part of the boat’s spirit or personality is captured. Far from referring to her as a vehicle or machine, a name resembles a living thing, and acknowledges her role and importance. She is not just a beast of burden or a form of transport, she has responsibilities toward her crew and passengers, to protect them from threats at sea.”
Jonathan Eyers. “Don’t shoot the albatross!. Nautical Myths and Superstitions”

Like that, our ship the Europa pays tribute to her illustrious Greek mythological name origin. Europa was supposed to be the epitome of feminine beauty on earth, to the point of captivating the King of Gods attention. Zeus didn’t hesitate on abducting her from the seashore in Phoenicia, when with his shape transmuted into an impressive white bull, let her ride him. Their trip took them over the seas to Crete, where eventually they had three renowned sons: Minos, Rhadamanthys and Sarpedon. Beauty and voyages across seas merge into what the bark Europa represents nowadays.

The tale goes on until Europa’s death, when Zeus transformed her into a group of stars with which he himself merged again in the shape of a bull, in what is known as the constellation of Taurus.
The legend could well be a symbolic explanation for the creation basis of the European continent. The search of Europa by her three brothers lead to the founding and further expansion of Phoenician colonies along the Mediterranean shores.

Passerby people in Harlingen can stop on the key side those days and have a look at the ship that bears such distinguished name and historical baggage. With her white bull and gorgeous lady as her figurehead and the European flag fluttering in the wind up the mast.