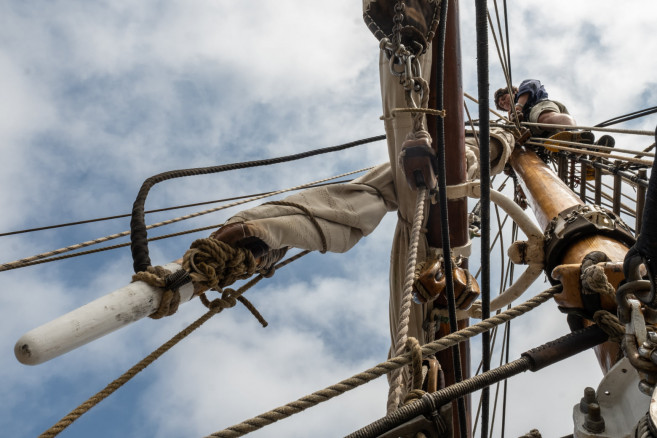 A long time of historical and enigineering developments were necessary to achieve configurations such as the Europa and similar square rigged Tall ships. Evolution on ships designs keeps on going with new rig, hulls, materials and sail developments.During the early times of sailing, the dominant rig was the square sail, with the canvas hanging from a yard held aloft perpendicular from a single mast. Adjusting the angle of this rig, swinging this large sail usually required lots of deck space.

The Ancient Egyptians are thought to have introduced one of the first types of sailing vessel back in 3400BC, using a large single square as propulsion, helped by the use of oars. This configuration offered minimal control, most useful only in following winds. Later on, one of the most iconic sailing vessels in maritime history was introduced by the Vikings, also using a similar sail type in their Longships.Evolution of ships and their rig designs led to changes from this large square sail to complex arrangements. Longer and longer exploration and trade requirements gradually made for a more efficient rig types. To sail faster it was necessary to increase the number of masts on the ship and thus increasing the amount of spread canvas and its adjustability. Large single square sails and the subsequent addition of more of them on top, together with the need of reefing them as the wind increases, required large crews to handle them. Afterwards, instead of many reefing points, split sails were introduced, as for instance, we carry a lower and upper topsails in the Europa.

Together with the introduction of triangular fore-aft sails, adapted from Arab sailors who developed them (called Lateen sails by the Europeans and subsequent adaptations), allowed for a larger amount of sails to fit in the boat and offering more chances to catch different wind directions for a required course.Like that we come to the golden age of sail, lasting approximately from 16th to the mid-19th century, when explorers reached corners over the seven seas, discovering new lands and commerce chances. Due to that, evolution of rigs suffered a quick boost, leading to the famous Clipper designs, and with the development of the Barks. Gradually more yards were rigged aloft, needing the addition of masts to gain height too. At the beginning being relatively easy lowered and hoisted (known as sliding gunters), but with the time becoming more of a fixed feature, working together with improved hull types.

Up to the Royal yards Europa is rigged on that fashion, but to reach the new heights for housing six square sails on main and fore masts, first the skysail masts themselves had to be lifted and set in position. While quite a regular procedure in the old sailing times, the hoisting or taking down masts and yards in the Europa, always represents a good challenge for the crew. To be used in sailing conditions where the ship doesn’t visit areas of regular strong winds, they are taken down every season before hitting the southern high latitudes, areas that use to pay tribute to their reputation of roaring 40s, furious 50s and screaming 60. But now, before summer cruising in the North sea and the upcoming Ocean Crossing to South America, it is time to rig them again, expanding our canvas surface adding this square sails that tower over the Royals.

Days of preparations are needed beforehand for such jobs as overhauling the yards and masts, bending on the sails and rigging all the extra lines and blocs aloft. Then the masts have to be fitted at the very top of the rig. The whole yards with the sails bended-on follow.Down below, other crew members are busy in other tasks. Scraping, sanding, varnishing or oiling still is on the go in handrails, booms, wheelhouse and pinrails. Indoor preparations for welcoming new guests are almost finished, while engineers can be seen emerging now and then from the ship’s dungeons maintaining the ship’s systems for power, propulsion and water.