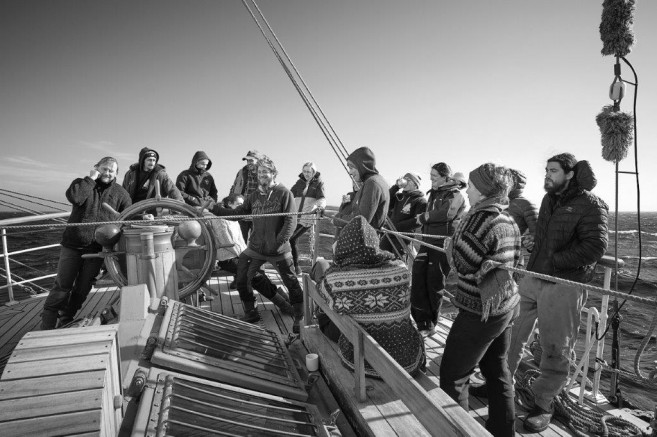 >> Anything is bearable if you can make a story out of it. N.Scott Momaday <<

Anything, including the unprecedented situation that has been put on in our path, where consequences of a pandemic viral infection are writing an unexpected chapter in our history. Now, with towns, cities and countries locked down, being able to enjoy the ample ocean seems to be a privilege. Winds, calms, storms, currents, sunsets and sunrises at sea. The illusion of freedom given by a long sail along the wide Atlantic Ocean, which our group of enthusiastic crew members is about to endure,
enjoy, and sure… on some occasions, suffer. Where a story, mattering little if it is good or bad, well or poorly written, deserves to be told. Even if it is just to try making everything more bearable for ourselves.

These are paradoxical times when one way or another, many got closer again to their relatives and friends, sharing more time together. At the same time, world-wide restricted mobility forced many to the opposite. But the majority, pushing the brakes of busy and stressful lives, have an opportunity to reflect and overthink the great changes the world has undergone in such a short time. To consider our place in it. To narrate about the singular events we are all living.

In the middle of the viral mayhem that seemingly has been able to make the world fall on its knees, a cosmopolitan and idiosyncratic group of people, 19 of us from 12 different nationalities, happened to be together on board the bark Europa. Three weeks exploring the Eastern coasts of the Antarctic Peninsula, South Shetland Islands and sailing the famous Drake Passage, were enough to return to a different world than when we set sail on this adventure. Will this changed world
influence a change also in our habits, our minds and to the economical paradigm ruling our existence? Doubtful...

One way or another that couldn’t last for too long. Whatever the COVID-19 world health crisis is, induced or natural, will
it represent a turning point in a world that has been planned in such a way, that now we lay overwhelmed because we can’t kill virus with politricks, armies, wars, weapons? Forced now to the use of knowledge, education and science that often has been underestimated and underfunded… where is it in now in many of our countries? abroad, or simply struggling for survival, like ourselves at this moment. In the meantime, we keep the world caught up in economical wars, destroying and building countries and their inhabitants at the will and benefit of a handful of parasites, who have become so big that they are invisible to us. A paradigm that is proving to be fatal. An illusion of archetype that has brought the planet and our own existence to a puzzling moment.

>> "If you saw Atlas, the giant who holds the world on his shoulders, if you saw that he stood, blood running down his chest, his knees buckling, his arms trembling but still trying to hold the world aloft with the last of his strength, and the greater his effort the heavier the world bore down upon his shoulders-what would you tell him to do?" "I . . . don't know. What . . . could he do? What would you tell him?" "To shrug.” Ayn Rand. Atlas Shrugged <<

It seems that Atlas, one way or another, has shrugged again, as he did many times in the history of humanity. We build walls, we hide. We build walls to keep out ideas and the people who potentially bring them. We build fences to keep ourselves inside,
nowadays more than ever. But now we may find the need to shrug ourselves, to crumble off some of these fortifications and coordinate international efforts to confront the current situation. While new walls are being built, while we choose controlling the population to avoid viral spread, the Europa crew will be bounded by the vastness of the Atlantic Ocean, a sort of isolation for the next two and a half months, bringing back the ship to her home port in Scheveningen in the Netherlands. The decision was taken a handful of days ago, after closely following the evolution of the COVID-19 infection, the different options taken by all countries to deal with it, and yearly schedules for our ship, which inevitably had to change.

Between laughs and cheerfulness during the days of uncertainty we passed in confinement on board, waiting for a decision to be taken. Days of ever changing news, amongst embellishing projects and necessary repairs on our ship, end of maintenance workday jokes, beers, games and evening movies; there’s an unavoidable sadness in all of us. For the loved ones in the distance dealing in many different ways with the actual state of things in the world; for the consequences of the infection and the decisions taken to handle it worldwide; for a future in front of us which we assumed was laid out in a way, subject to our
will or choice. Now we realise that the time to come is in fact not written and at any time can catch a wavering turn.

Today, the 27th of March 2020, Europa shrugs and sets sail. Some more seasoned sailors than others are part of her crew; captain, mate, boatswain, engineers, deckhands, each one with knowledge and skills to be shared amongst us. But all with love for the sea, for the idea of being as free as we can bear, and for sailing away with the bark Europa. For a few, she is a sort of a home; for others, a dream; for all, a treasured and singular ship to sail; for none just a job.