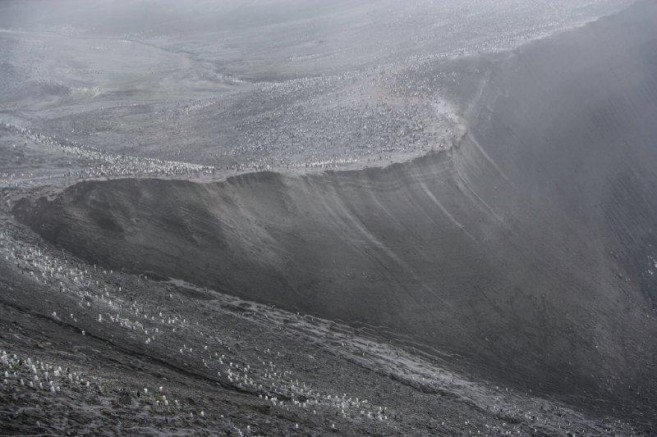 After an early lunch almost half of us were ready to start a long walk across Deception Island volcanic rim towards the NE, aiming for Baily Head.

After an early lunch almost half of us were ready to start a long walk across Deception Island volcanic rim towards the NE, aiming for Baily Head. This is one of the few chances to get a good leg stretch in Antarctica, as almost the rest of places to visit have reduced space for visitors to roam around and walk.

At the beginning the hike takes place following a melt water stream running close to Neptune’s Window, in the South end of Whaler’s Bay beach. After climbing to about 150m we reach a viewpoint over a steepcliff, we had a glimpse at the outside of the island, even at Neptune’s bellows, the very narrow entrance to Deception’s caldera. After a few minutes here to catch our breath and taking some shots, we kept going over Deception mountains and snow fields to reach our destination. The weather begins to deteriorate, becoming foggy and we end up walking in the mist and drizzle. That gave an even more dramatic appearance to the spectacular landscape surrounding us.

We walked uphill for approximately half an hours more, gaining some more altitude and avoiding the lower parts covered by the largest extension of pearlworth (Colobantus quitensis) in Antarctica. This is one of the rare vascular plants in the white continent. Our ascend takes us to about 300 meters above sea level, here we found a quite flat area from where we could have a glimpse between the low clouds to both sides of the island, the interior of the caldera and the outer part.

We keep walking across lava fields and frozen streams covered by the recent snowfall. We walked on snowy and hilly terrain with a few melt streams and covered with substantial volcanic ash. And then, we're there: Baily Head, Seeing and hearing from the distance multitudes of Penguins in the mist, and then getting closer to mix with
them for a while.

The site comprises the southern end of a long linear beach which runs along most of the eastern side of Deception Island, and a narrow valley that rises steeply inland to a semi-circular ridgeline, giving the impression of a natural ‘amphitheatre’. This valley, entirely on the outer slope of the Deception caldera, provides nesting territory for an estimated 60,000 pairs of chinstrap penguins, nesting in large, tightly packed colonies scattered throughout this natural, volcanic Amphitheatre, even along the higher ridges, making us marvel that these little fellas make their way every second day so high up the hills.

From the ships logbook