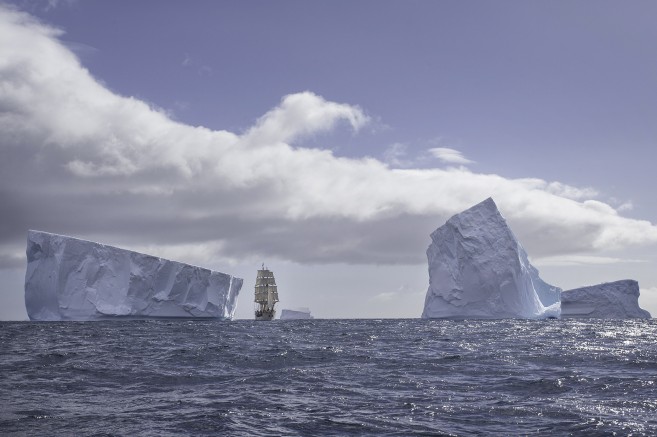 where we had visited the Argentinian base Esperanza on the previous day, and headed south to the Weddell Sea. The plan of the day was exploration, trying to come as south as the ice conditions would permit. We were partly following the route of the Nordenskjöld expedition of the years 1901-1903, which reached the Snow Hill Island about 60 miles south from Hope Bay.

There were many different types of ice floating around us, from small pieces of sea ice to huge icebergs originating from glaciers and ice shelves reaching from the continent to the sea. Our captain Eric and mate Elskarin, with the help of the crew members sitting at a lookout point high up the mast, carefully navigated through the icy waters, avoiding all big blocks but sometimes pushing through some smaller pieces of ice.

Around midday we started seeing some patches of blue sky and in the afternoon the sun came out. That moment everybody had been waiting for and cheerful comments were heard all over the ship. The weather had been good enough to go on land at every planned site but it had always been cloudy since the middle of the Drake Passage where we had our last sunny day.

Sunlight made the whole landscape around us look even more spectacular, with icebergs shining in white and various shades of light blue against the dark blue sea. Many put on harnesses and climbed up in the masts to have a view from higher up. The wind was just a gentle breeze, making it safe to climb and take photos from the various lookout points the ship offered.

Occasionally we saw seals and penguins on top of the floating ice, resting and enjoying the sun. Later in the afternoon, whales came to greet the ship. A group of humpback whales blew fountains of air and water drops high into the air and showed us their massive bodies and white and yellow colored tails. Orcas were looking for seals to catch and came several times to the surface between dives. Our guide Jordi explained us how to distinguish between different species and between male and female whales based on the form of their fins.

There were several sightings of whales during the afternoon and evening, so we spent a lot of time outdoors wearing all our clothes to cope with the below zero temperatures. At the end of the day, after a zig-zag of searching and following ice free routes we reached the southernmost point of our voyage, about 63 degrees 44 minutes south, next to the 11 mile long tabular iceberg called B-15Y. It was actually a piece of B-15, the largest iceberg ever recorded, a gigantic mass of ice which had broken off from the Ross Ice Shelf on the other side of Antarctica 15 years earlier.

The sea was far too deep to anchor, so the captain let the ship drift in the open water near the iceberg. While having dinner the sunset shortly cast a red colour on a line of far away icebergs, which marked the end of the marvellous day. During the night, volunteers worked shifts on watching the radars in the wheelhouse and the ice outside, to ensure that we wouldn't be hitting anything large enough to damage the ship.