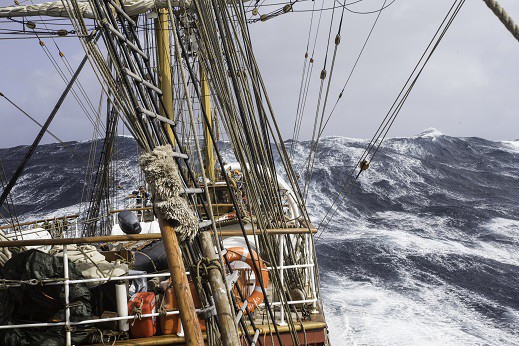 We have now crossed the Antarctic Convergence Zone where the warm northern waters meet the cold Southern Ocean. The temperature has dropped considerably and we are now almost up to maximum layerage in clothing!

Yesterday afternoon I awoke from a mid afternoon snooze (I had been on the midnight watch) to shouts of 'Iceberg'. Slightly disconcerting but I knew this meant that the first iceberg had been spotted. I went out on deck expecting a small thing and was met by the sight of a slab of ice maybe half a kilometer in size about a mile off the Port side. We also spotted a number of Humpback Whales crossing our path - seen by the spouts of water from their blowholes and the occasional vast back as they dived. The water here is a deep sapphire blue with the tops of the breaking waves the fresh crystal clear light blue you generally only see in toothpaste adverts..

Last night, it really hit me. It was 1am and the ship was bucking and rearing over big waves, some of which were crashing right over the deck house. I'm on watch and two of our team are out on the bow with the searchlight looking for Growlers - small icebergs "the size of cars above the water and the size of trucks below"! They don't show up on the radar. Small white Petrels are playing in the light off the bow like swallows. We're under sail in the vast and unpredictable Southern Ocean in a 56m tall ship doing 7 knots heading towards South Georgia. And for the next 20 minutes - I was at the helm! This is what I came for. This is what it feels like to be really alive!.