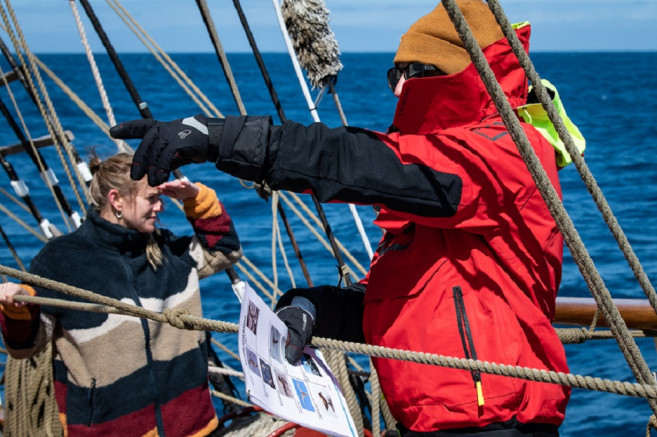 A hero for many, one of the greatest pirates for others, privateer for the English crown. Sir Francis Drake carries a heavy historical baggage. Arguments about religion and trade meant that England was at war with Spain for much of Drake's life, during the second half of the 16th Century. He made his name both for raiding Spanish ships sailing back from their new conquests in South America and for his successful circumnavigation of the world between 1577 and 1580. This voyage helped to give a more accurate picture of the true geography of the planet. Amongst his adventures during those years at sea, his ship, the Golden Hind, while trying to sail the Straits of Magellan was blown off southwards by a tempest. They found open waters instead of lands connected with the hypothetical Southern Continent believed to exist. South of the Straits of Magellan an archipelago was to be found and south of it, the ocean. That meant that if America was not connected to a Southern Continent, the Pacific and the Atlantic oceans met. It should be possible to sail ships around the bottom of South America, south of Tierra del Fuego. This was the Cape Horn route, eventually discovered in 1616.

Nowadays we know this 450nm stretch of rough seas and inclement weather between Cape Horn archipelago and the Antarctic Peninsula as the Drake Passage. Characterized by its high seas and for being a sort of a highway for Low Pressure Systems that sweep the area on their way from the Pacific to the Atlantic. The main ocean current runs here in the same direction as well, flowing all around Antarctica, permitting just a restricted water interchange north and south following the coasts of southern Patagonia. The cold and dense waters from the southern continent meet along this current with the warmer and lighter ones from the subantarctic region, creating the so called Antarctic Convergence Area.

Keeping our southbound course at some point we were meant to cross this frontal area. And indeed it happened during the day as we sail over half way to Antarctica. At 08:00h in the morning the recorded surface water temperature read 5.7ºC, while twelve hours later it had decreased to 3.4ºC, indicating that we just crossed the northern boundary of the Antarctic system. The progress it has been under engine first, helped by some of the sails, until before lunch time, when the wind picks up and more canvas is set. Courses first, then Royals are added to the configuration, pulling the Europa on the 18 to 20kn Southwesterly wind, braces on Close hauled on starboard tack. From then on, we all enjoy great sailing conditions. Fair good breeze, good seas and sunny weather made for a great day at sea, working with the variable winds, now lighter now up to 25kn shifting between SSW-ly, SW-ly and WSW-ly. It’s not just us that benefit and delight from those conditions, but also the seabirds that could be seen flying around the ship.

Even tough albatrosses are more a Sub Antarctic species than truly Antarctic, three of them showed up. Being the most common one the Black-browed, they smartly glided close to us accompanied now and then by the bigger Royals and Wandering, these being the birds with the largest wingspan in the world reaching up to 3.5m from tip to tip of their wings.
Belonging to the same family of tubenoses, the most frequent observations had been of Giant petrels. Often they glide along almost at our hands reach, while out at sea, fluttering over the swells, numerous Wilson storm petrels look for nourishment. Far away from their nesting areas ashore, these apparently fragile but in fact tough small birds are brave enough to venture far into the roughest seas of the planet. In the meantime flocks of Prions keep showing up during the whole journey.

The albatross did follow
And every day, for food or play
Came to the mariners hollo!
In mist or cloud, on mast or shroud
It perched for vespers nine
Whiles all the night,
through fog-smoke white
Glimmered the white moon-shine.

- Samuel Taylor Coleridge. “The Rime of the Ancient Mariner”

Immortalised by The Rime of the Ancient Mariner by Samuel Taylor Coleridge, everyone knows the age-old superstition that says it is terribly unlucky to kill an albatross.

Albatross is among the largest of flying birds, with the largest Great albatross recorded as having a wingspan of over 11ft (about 3.5m). Though mainly found in Antarctica and the southern Atlantic, as far north as Cape of Good Hope, the albatross can fly great distances. They mate for life, but, living for fifty years or more, can spend years flying solitary. Obviously nobody’s paid much attention to the superstition against killing them, though 19 of the 21 species of albatross are on the endangered list.

All those observations are useful to share with the scientific projects that the Europa is taking part on, the so called Citizen Science. This collective is a community created to bring opportunities for research and public education by connecting researchers and research institutes with tour operators in the polar regions. With the rapidly growing numbers of ships and visitors traveling to the remote Antarctica, their sightings and pictures can actually be of use for scientific surveys. Talks and lectures on board help to understand this concept, to actually identify species, the aim of the different projects and to engage as much people as possible one them.