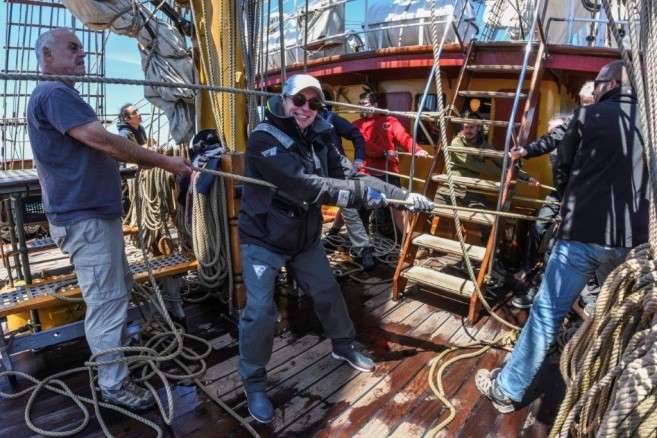 Early morning found us slowly motorsailing out of the shallow Rio de la Plata estuary and into the open seas of the South Atlantic. But still it will take a few more days to leave behind the extensive continental shelf of this area and reach the deep ocean. Similar ESE-ly 8kn wind conditions to last afternoon were with us until tea time, when captain Eric decided to change tack. Our course went from
110º to a new 240º, still motorsailing but preparing the ship for the forecasted E-ly and NE-ly winds later on. Many of us helped with the manoeuvre, bracing to port tack and passing the staysails to the other side. The expected change in wind direction and strength is related to a centre of high pressure getting closer to us. That could also be noticed by the sunny clear skies and mild temperatures, with many of us enjoying a few hours lying in the sunny decks. Several Black browed albatrosses soar close to us, accompanied by Giant and White chinned petrels, while small flocks of young Terns follow the ship as well. The numbers of seabirds will just keep increasing during the next days as we gain distance towards the higher latitudes on our way to the colder Southern Ocean. But for the moment the water temperature stayed warm, all day above 17º C, thus indicating that we are still under the South flowing Brazil Current that runs along the South American coast until approximately the latitudes were we find ourselves at the moment. Soon we expect to start recording lower surface water temperatures and encountering the Northward flowing Falkland Current, first sailing through the mixing waters and numerous eddies that are created when both oceanographic currents meet. Getting closer to this area is not very strange to have met our first curious Magellanic penguin swimming close to the ship. The largest rookery of this species is located south of us along the Argentinean coast, at a latitude of about 42ºS in Punta Tombo, close to the world famous and
teeming with wildlife Peninsula Valdes. During the afternoon as the wind increased and became more E-ly, we started setting all our canvas again. A good couple of hours in the afternoon were used to set sail under the close supervision and instructions of the permanent crew, turning the scheduled afternoon talk on “sail training” in a proper “hands on” exercise. By 18:00h the engines were turned off and we could enjoy the pleasure of great sailing under a gorgeous sunset and for the rest of the evening and night. The new course we keep is slightly west of the straight line to South Georgia, keeping in mind what we could already see in the wind forecast for the next couple of days. It seems like tomorrow night headwinds will hit us once more, following the passing of a new low pressure system over our track. Sailing on a course of approximately 160º will give us some room to gradually curve our way eastwards towards our destination. All an all, under these variable conditions we have covered 160nm since departing from Montevideo, and by 20:00h we found ourselves about 80nm from the closest land, north of us in Uruguay, and 95nm from the closest Argentinean Cape at the entrance of Rio de la Plata. We still have 1265nm in a straight line to cover until South Georgia, but surely this distance will be larger routing our course according with the weather systems sweeping over the area in the next days. The quiet and pleasant evening sailing became increasingly rougher before midnight, when we experienced quite a sudden increase in the wind speed. From 11 to 18kn, veering more to an ENE-ly direction, hence increasing our speed from 5 to over 9kn. Some bracing needed to be done as well, now setting the yards to a beam reach point of sail.