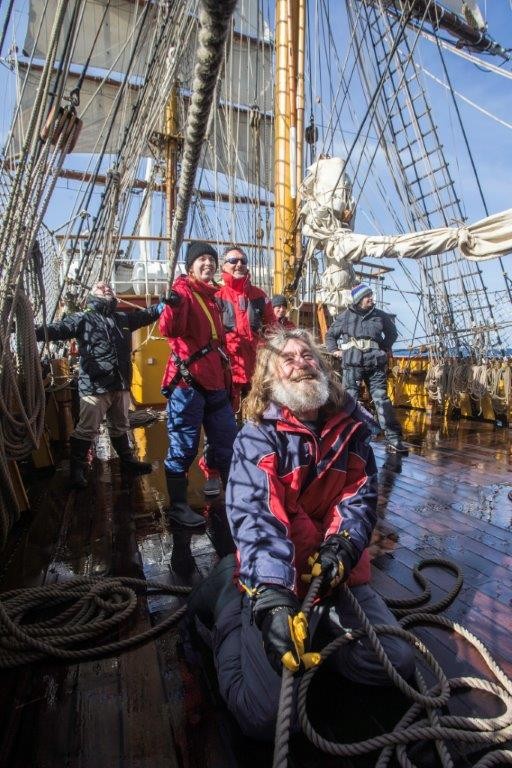 Big following seas keep the Europa uncomfortably rolling overnight and for most of the day. Changing winds also kept us busy and paying attention to the weather developments. Sailhandling continues during the night, as the forecast shows increasing winds up to 30kn. First the small staysail Aap over our Main deck comes down, followed by the Main Course. The crew stands-by to clue up the Top Gallants, but for the moment seem to hold properly on the passing bursts over 35kn. Europa rides the Scotia Sea reaching 11kn of speed on her surf. Under those conditions once more extra-care must be taken with the steering. Even being on-course the ship experience uncomfortable rolling on the big swell, but many of us often still fall few degrees off-course causing Europa to wildly move and water to wash over the decks. At a point when experiencing strong gusting and variable winds, it becomes really difficult to keep her on course and the steering is taken by the wheelhouse, until better conditions in the afternoon let the Voyage crew takes over the wheel again. For instance, even though much less showers pass by our course, in the morning WSW-ly winds pick up on a squall to over 47kn. To better deal with the situation Top Gallants are taken away and furled, while the ship still reaches speeds between 8 to 10kn.

As the day advances and clear skies take over the clouds and showers, so the wind stabilises at about good 25 to 30kn, allowing to set Top gallants once more.

The seas keep being pretty similar to yesterday, with long huge swell eventually leaving the Main deck awash and coming over the rails. In one occasion we ride such a big powerful wave that reaches the Sloop deck where still the Whisker boom of the Main Course sits on its bracket, snapping it as a toothpick. Quickly the broken pole is brought on board and plans for a repair of making a new one start running through our minds. Later in the afternoon already a rough replacement is stretching the foot of the Course, as the wind eased and veered becoming WNW-ly, allowing to set most of our canvas again, steering more Eastwards straight to the outer islands on the NW tip of South Georgia.

Sailhandling continues for the rest of the day under the sunny skies and the water washing the main deck. Jibing, bracing, tacking, and all the necessary to keep a good speed on the fair winds we are still lucky enough to have, to reach South Georgia at some point during the night. Planning to start landing activities tomorrow morning.

During the last week and now at our last approach to the island, we have been sailing the very same waters that the illustrious Captain Cook navigated on his quest for the Southern Continent. Most famed for his Antarctic circumnavigation, many other achievements fill his pockets. All an all, this stunning island creates great attraction, then and nowadays. On board great expectation is on the air, even if land couldn’t be sighted before dusk, it seems that its proximity cheered up everybody on board. South Georgia sure will surprise us, unfolding its beauty with the first light of the new day.

I'm sure after all that you are grateful to be able to be on land for a short time! Looking forward to seeing my Dad's (Wayne) photos! Sounds like such an incredible experience! x