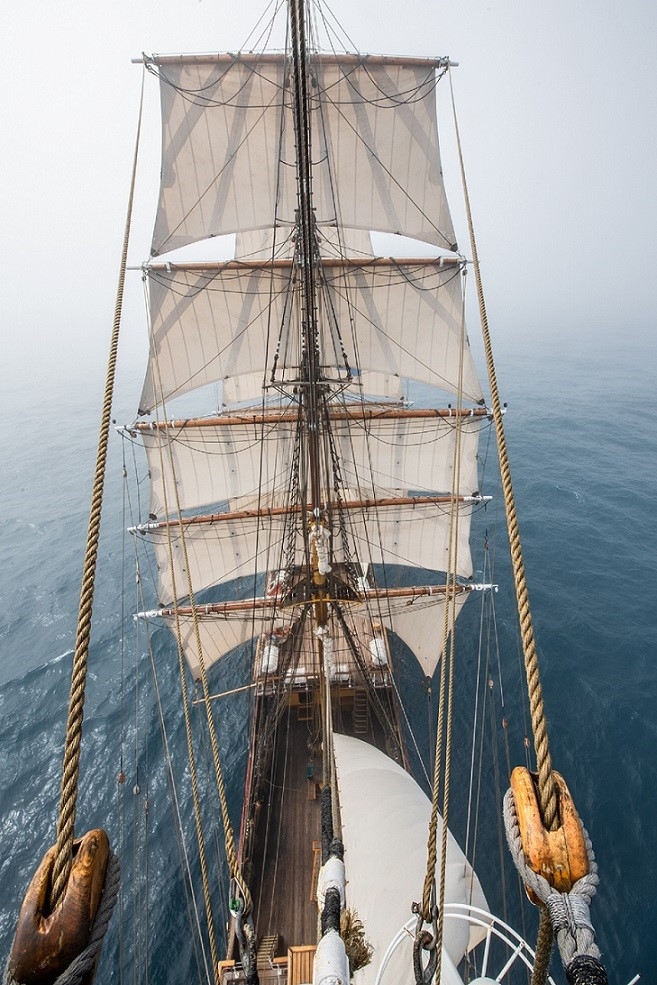 Given a good barometer and eyes, a sea forecaster has all theinstruments he or she requires. Of all the weather systems there are variations and combinations, but whatever these may be, and however complicated, these portents remain always constant. The changing sky, the fluctuating glass, the signs and beacons which nature plants in heavens - these are always there in a more or less marked degree. Out at sea there is never lack of indication of what tricks nature has in her store.

Fog banks in the morning can indicate a drop on the water surface temperature and a higher degree of condensation. Indeed the temperatures recorded during the last hours have been decreasing from 14 to 10ºC.

A barometer that stops dropping and starts indicating a rise on the atmospheric pressure. An eye on the windforecast show a sort of calm weather before a wind shift in direction and force. And at the evening, low clouds moving fast in the horizon behind us corroborate the prevision. A day of mild temperatures and light breeze coming back and forth from a Northerly direction to a Northwesterly, is about to change into more challenging conditions during the night.

Time for getting ready and thinking on how to prepare the ship for stronger winds and higher seas.

Looking ahead at the weather patterns and forecast for next hours or days is of substantial importance to plan routes at sea, besides being of great help too for a safe sailing passage. Nowadays meteorological computer simulations based on mathematical models give us good information about what to expect with more or less accuracy depending on our location in the world, but it hasn’t been so easy as it is now during the long history of sailing. Historically, the experience and good eye of captains and sailors together with a touch of luck had made for countless decades of successfully sailing the world, seasoned with epical adventures at sea dealing with storms and squalls, calms and raging seas. But it was not until the 18-hundreds when the first forecasts were developed by the famous Captain Robert Fitz Roy, who discovered and mapped the Beagle Channel, circumnavigated the world and brought the young Charles Darwin with him in his adventure. A trip that changed the history of the world and the way we look at the living creatures. Fitz Roy knew from first hand the importance of researching and having a good idea about the evolution of the winds and their patterns at sea. Pioneering this research he designed and used the first weather-stations, creating a system of meteorological warnings including the first daily weather forecasts. A toolever-presenttoday in ourdailylives. Onboard, routing and general sailconfiguration can be planned in advancehaving a look at them. Crew can havean idea ofwhattoexpectduringthenextwatches. Plansforarrival at a determineddestination can be revised and look upon.

With all the indications clear for a wind and weather change, Europa deals with a day of light conditions with the breeze often blowing at 10kn or less, slightly backing and veering. In the late afternoon the puffs of air push her from the back, making for pulling down lower staysails and furl them, while squares and jibs hang and swing, waiting for the wind to increase. A change that came late at night when the breeze become a good wind over 20kn. And rapidly increasing the situation tell us to come out on deck and pull some ropes, clewing up the Royals, climb aloft and furl them, preparing the ship to negotiate stronger conditions for the rest of the night.

All the best! We are sailing with you in our minds - waking up and knowing that you are on tour lets us remember how great the time was we spent together with you last year ⚡️🌈⚡️