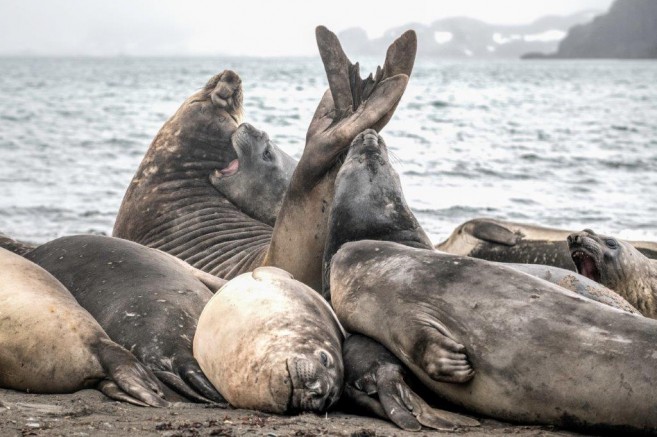 After a night holding anchor at Half Moon, early in the morning we pick up the 4 shackles of anchor chain and start our way towards the dramatic rocky peninsula of Fort Point. Located at the Eastern shores Greenwich Island, its crags crown a flat and narrow boulder peninsula that sticks off the large glaciers that cover the island. Poorly chartered waters surround this spectacular site, together with its exposed orientation to the open waters of the Bransfield Strait makes of this place a gemstone seldom visited. Setting foot ashore always involves a difficult operation, including surge at the beach and the need for the guides to wear dry-suits to ensure safe and swift landing manoeuvres. Before breakfast Europa drops anchor close to the Southern coasts of the peninsula, where the swell and breakers seem to be easier and lower than the opposite coast. Anyway the spectacular and unique setting of the area and its inhabitants are worth a wet landing over the breaking waves. From Fort Point Europa make her way along the southern shores of Livingston Island towards our next destination, distant 42nm, that will represent an arrival time in the late afternoon and an evening landing at Elephant Point. Before diner we already drop anchor in the uncharted waters in front of Elephant Point, another seldom visited spot of the South Shetland Islands. Looking at the beach, our landing spot will be right next to a conspicuous square basaltic pillar guarding an extensive flat beach. This site is also relevant for the early history of Antarctic discoveries, strongly related with sealing and whaling. It was first charted and named by Robert Fildes in 1820-22. From this point and further West to Byers Peninsula (that forms the western tip of Livingston Island) many concentrations of early 19th Century sealers relics and remains from whaling operations can be found. And indeed, scattered over the large landing area, whale and seal bones, wood from old refuges and one of their impressively well-preserved stone hut. Still with the whale vertebrae used as stools and the whale ribs piled up ready to be used as a protective roof, it gives us an idea about the harsh lives of the people who worked here in the grueling sealing industry of the 19th Century. But first we were all surprised by the large amount of moulting Elephant seal haul-outs to be found in the area, a clarifying sight to understand the origin of this place’s name. Mostly males can be found here at time of the year, in groups comprising individuals from different ages. Some of them just pups born a couple of months ago, others counting with larger animals.  the area offers a combination of open spaces and zones completely crowded by wildlife. Even one of the rocky outcrops next to the beach is home for several pairs of Giant petrels, from which we maintain a good distance as normally they get easily disturbed. Amongst them a few White morphs can be seen, looking smart with their almost completely white plumage, in comparison with their greyer or brownish congeners. Soon it became close to 22:00h, when we all have to be off the beach to respect a daily period during the night when no ships are allowed to land, leaving the land for their true inhabitants.