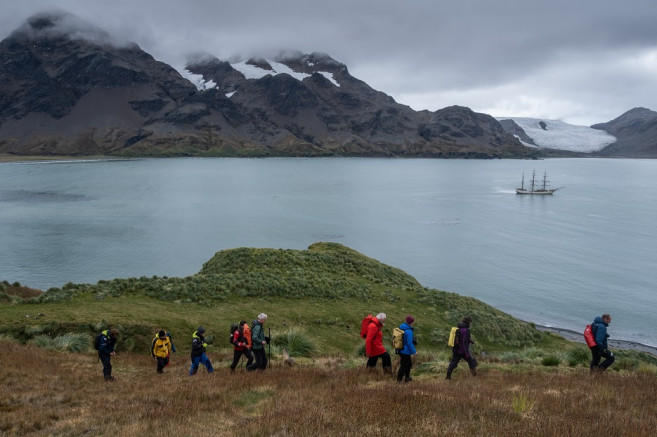 Twenty-five nautical miles lie in-between the Bay of Isles and Fortuna Bay.
With the changeable weather and variable north-easterly winds we are experiencing, together with the lack of good anchorages in the way, Europa heaves anchor from Salisbury Plain and soon starts her way.
Fortuna neither offers a good shelter nor a suitable depth to harbor for a long time.

Like that, Europa spends part of the night drifting in Fortuna after rolling her way on the long swell on the northern offshore waters.
Such a lucky denomination for this inlet derives from the whale-catcher Fortuna, first on operating out of Grytviken in the early 1900s.
Like fortunate, they were also Shackleton and his two companions when they reached the northern coasts of South Georgia right in that bay.
A crossing of the glaciated island from the exposed Western coast, in the unbelievable time of just 36 hours over unexplored and unmapped terrain brought them to the shores where we set foot this morning.
Just about 6km further East over easier terrain, Stromness whaling station, people, shelter, food, help.
Salvation after a year and a half of struggles in the ice and extraordinary survival adventures.
The same 6km we followed in the afternoon.

But the morning had other stories to tell.
Stories of prior endeavors, the ones from the sealers operating here in the early times of the sealing rush on the island.
Stories to be told at the southwest shores of Fortuna Bay.
The swell at the beach of Whistle Cove breaks over rocks and small pocket beaches, where to operate with our rubber boats.
In the background a reminder of those old hunting times: a sealer’s cave.
Along South Georgia's coastline, those are to be found in several locations.
Home for sealers during a few days while they wipe out the area from precious Elephants and Fur seals before re-embarking their ships to be repositioned to another one of those caves.

The setting is stunning.
High steep mountains frame the land terminating gentle slopes of the Konig glacier.
In between, it's old moraines as a grassy green undulating plane.
Amongst them, one of the main attractions of the area is a large King penguin rookery that counts an approximate number of about 7000 pairs, located 1km inland from Whistle Cove.
Their home is set on a magnificent mountainous landscape of sheer cliffs, receding glaciers, and a maze of ponds and small lakes, where, if lucky, the surroundings can mirror.

Once more, another adventurous zodiac embarkation on the surge at the beach brought everyone on board for lunch, after which the famed “Shackleton Hike” was planned.
The most famous walk in South Georgia follows the steps walked over 100 years ago by Shackleton, Worsley, and Crean, between Fortuna and Stromness Bays.
They managed to cross the whole of the undisclosed interior of the island in wintertime, cold, dark, and snow-covered, until reaching Fortuna Bay, where they knew they were going to make it.
Today the conditions are very different, though foggy at times, this last bit of their epic walk is well known and mapped, it is now the end of summer and the icy conditions are still to come.
Across steep tussock grass, we make our way, while the ship disappears in the distance, Stromness is her next destination and where we are to meet her in a few hours.

Tussock hills give way to a more mountainous terrain, where small valleys cut through a maze of glacial moraines that lead to Crean Lake.
The story tells about three extremely tired and cold men walking to the saddle between peaks just ahead of them, when Tom Crean suddenly went through the ice, and fell up to his waist in the freezing water, just when the end of their struggles seemed so close.
But still, another surprise was awaiting, the steepness of the descend towards Stromness.

Today, in the fog we find our way to the top of this way down.
Just at the right time though, a few moments after reaching the highest altitude of the hike, fog swiftly lifts allowing for amazing views of the panorama.
Down below the large flats that lead to the whaling station, that rests at the coastline.
To reach it, a steep path that passes by the foot of a picturesque waterfall, yet another feature with its own history related to Shackleton’s crossing.
Here, the men followed a stream downhill but soon were surprised to hear the sound of a waterfall, which has become their last challenge before reaching safe port at Stromness station.
Leaving their last bit of rope behind, they lowered themselves straight into the ice and freezing water. No need for us to retrace those very steps, as an easier way lead us there.

Once a lively place – Stromness has now been left to the elements for almost 60 years.
It has weathered a good amount – but even though it is mostly falling apart, the main structure of the whaling station is still visible.
It was active as such until 'The Silent Year' of 31-32, the season that none of the Norwegian whalers went out.
After it was reopened as a ship repair yard for the neighboring Leith station and functioned until the early sixties. Masts, Crow’s nests, planks, and several enormous propellers next to the pick-up place by the zodiacs, remain as witnesses of this last period.