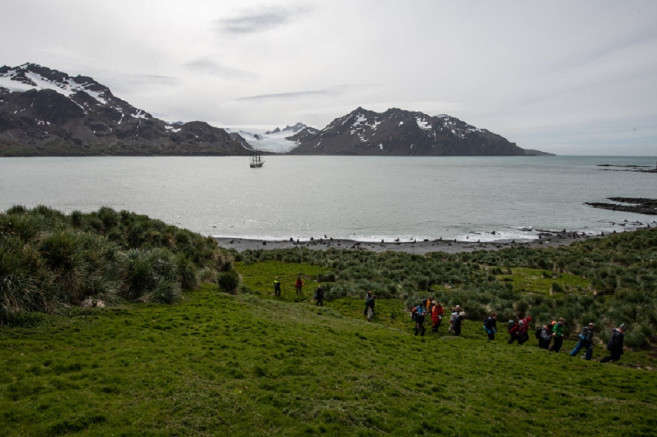 Blown off Prins Olav Harbour, the Europa makes her way overnight in the open waters towards Fortuna Bay. Gusting winds and swell makes her rolling and kept her mind concerned about the changeable weather and seas situation that are a characteristic from this next destination. Open to the Northerly winds and with not a good anchorage to be found, she will have to drift around for most part of the day if luck is on our side and we can manage the activities planned.

Not being a sheltered good harbour, many wander about the denomination of “Fortuna” given to that picturesque and historically relevant bay. It was actually named after the whale-catcher Fortuna, first on operating out of Grytviken in the early 1900s. Fortunate where too Shackleton’s party of three men when they finally reached the northern coasts of South Georgia right in that bay. Their days and days, months after months of struggles for survival were about to rich their end. They just finished an incredible adventure involving from getting stuck in the ice with their ship Endurance, witness her being crushed by the pack, survive the unforgiving conditions of the Weddell Sea and Elephant Island, brave the tempestuous waters and demonic storms of the Scotia Sea on their open boat James Caird, and cross by foot the glaciated interior of South Georgia. This last bit being a feat performed in the unbelievable time of just 36 hours over unexplored and unmapped terrain. When they descended the large glaciers and icy plateaus from high up the mountains, still over 6km of easier terrain had to be crossed to the neighbour bay of Stromness, where lays the whaling station that waved them goodbye a year and a half before. The section of their struggles that we plan to follow in the afternoon.

Located in the same Fortuna Bay and close to where they first left the glaciers behind to walk over more solid ground is Whistle Cove. A place that tell stories of the early sealers operating here during the sealing rush in the island. There we set foot ashore  in the morning, amongst rocks and small pebble beaches that break the swell running into the embayment. During the zodiac operations and for the duration of the landing, the Europa tries to hold position and shelter the boats shuttling us to the rough coast. Strong wind gusts doesn’t make for an easy operation, but after successfully landing everyone we find ourselves walking along the old home for the Fur and Elephant seal hunters. Groups of a few men where sheltering here for days in a row in a small cave, while the hunt lasted. Then their base ship would eventually pick them up with their precious cargo. Along South Georgia coastline those shelters are to be found in several locations.

Without doubt the scenery is stunning. The receding Konig Glacier at the background has exposed a vast area of grassy slopes and low undulating landscape nested amongst high steep mountains. The area is now home for a King penguin rookery that counts an approximate number of about 10.000 pairs. To get there and back, the usual care must be taken to move around the Fur seal crowded beaches, now also joined by numerous young Elephant seals in their moulting phase.

With the wind conditions being variable and gusty, the activity planned for the afternoon required a good look at the swell conditions and weather atop the mountains. We were about to give a try to the most famous hike in South Georgia, following the very same steps walked over 100 years ago by Shackleton, Worsley and Crean, between Fortuna and Stromness Bays.

By that time they had to brave winter conditions along the unmapped way. Nowadays its counts with a well trodded path for most of the walk, maps, GPS and satellite phone in our guides backpacks. Summer time together with today’s gentle meteorology made for an enjoyable leg stretch where they were fighting against hostilities and struggling for survival.

A wet disembarkation from our rubber boats was followed by a climb over tussock grass slopes. A look at our back revealed the ship setting course off the bay, heading towards Stromness where we are to meet her in a few hours.

Higher up, the vegetation becomes more and more scarce, giving way to rocky mountainous lands leading to several viewpoints, the most famous ones being Crean Lake first and Shackleton’s gap afterwards. Both located closeby, both surrounded by legendary stories. The narrative goes about three extremely tired and cold men walking to the saddle between peaks just ahead of them, when Tom Crean suddenly went through the ice, and fell up into the freezing water. Yet another dreadful happening just before the end of their adventures and misadventures. Not far, a shiny light in the dark: soon afterwards they could hear the horn of Stromness calling for a change of the working crew shift. Despite the whaling station not being in sight yet, they now knew they were going to make it. But yet a steep descend was between them and salvation. Once more, nowadays a steep path leads the way down, by then, the three men followed a stream downhill that falls down in a large waterfall before reaching the flat ground that extends to the coastline. Leaving their last bit of rope behind, they lowered themselves straight into the ice and freezing water.

From there, about 30 minutes of easy walking brought us to Stromness. Once a very active whaling location, it has been left to the action of the nature’s elements for over 60 years. The large amount of huge propellers, spare masts, chains, cables and other implements left around the station, talk about its main use by the end of the whaling times as a repairing spot for ships operating in these waters.