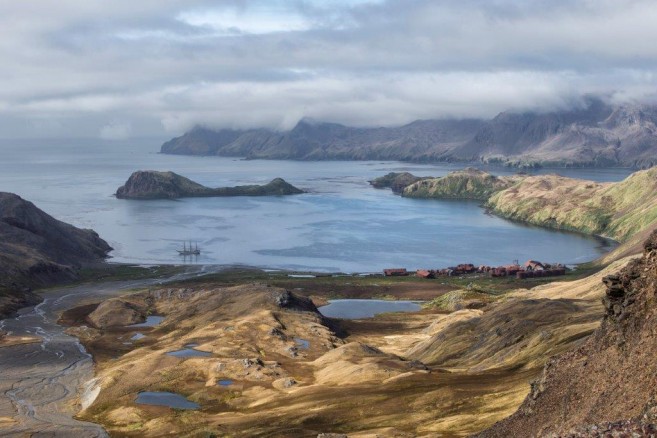 After a peaceful and quiet night, Europa starts her way towards Fortuna Bay. Windless conditions and flat seas promise a nice day of walks and landings, but it doesn’t offer the chance for sailing the about 20nm from our anchorage to where the famed and much anticipated Shackleton walk starts. Gently motoring our way we arrived to Fortuna Bay by breakfast time. Shortly afterwards we were all ready to face the legendary path that follows Shackleton footsteps from here, across the hills, to Stromness Bay. Low clouds hanged over the mountain tops, but still above the heights we were reaching during the hike. The flat looking seas reveal a landing beach with long rolling waves that were easily negotiated but made for a wet landing.

As usual straight away inquisitive Fur seal pups surround us with their irresistible funny faces and playful mood. At the back beach we dealt with a short area of Tussock grass before gaining some altitude over grassy slopes. From there we waved farewell to the ship that already started her way off Fortuna, to meet us in a few hours around the corner, in front of Stromness whaling station. A bit further countless pictures were taken from a scenic viewpoint over the whole Fortuna Bay. Glaciers retrieving quickly during the last 100 years have left behind an outwash plain filled up with a shallow meltwater lake, just where Shackleton, Worsley and Crean had to deal with a crevassed icy surface to cross from one side to the other of the bay.

After their Antarctic misadventures, the loss of their ship “Endurance” crashed in the Weddell Sea ice, and the unimaginable struggle for survival in the ice and on board their three savaged sloops, Shackleton and Captain Worsley managed to put ashore all their crew at Elephant Island. From there, himself, the Captain and the four fittest crew members undertook a mindboggling 16 days sail on the sloop “James Caird” through the roughest waters in the planet to reach South Georgia. Eventually landing at the Western coasts of the island and from there undertaking the technically difficult crossing of South Georgia, through heavily glaciated terrain and high mountains, till reaching Fortuna Bay. Today we could have a look at their descend route from up the peaks to the shoreline. Nobody and no whaling stations were allocated at Fortuna Bay, so they still had to cross from here to the next bay, Stromness, where salvation was found. This last bit is the part of the crossing that we hike today.

Not to forget the large party of men still stranded at Elephant Island, it was first from Stromness where Shackleton made his first attempts to rescue them. Eventhough their adventures took place over a hundred years ago, while we walk on their footsteps wearing modern clothes and in weather that ended up gifting us blue skies and sunshine, we all feel a sort of connection with those expeditioners. They were, as the old saying goes, “from a time where the ships were made out of wood, and men made out of steel”… in a way is the opposite of what we can say nowadays.

From the scenic saddle amongst the mountains separating Fortuna and Stromness bays, a steep way down had still to be negotiated, but nowadays a well-trodden path indicates the easiest way to descend to the well-known Shackleton waterfall. There we can refresh ourselves on its icy cold waters, have a rest under the sunny blue skies and enjoy a morsel of chocolate. Difficult to imagine back in time how this place was when the exhausted Shackleton and his men reached this very same point. They were in a much colder weather, on an icy landscape and on a desperate run for their lives. Under this situation they ended up atop the frozen waterfall, with no way down but using their last bit of rope, attaching it somehow and lowering themselves down.

After endless 36 hours of non-stop climbing they made it to the whaling station, where they were barely recognized by the Station Manager, who they met at the start of their planned Transarctic Expedition and had warned them about the foul icy trap of the Weddell Sea.

Reaching the Station is not allowed to approach closer than a clearly marked perimeter around it (as it is in the rest of whaling bases, with the exception of Grytviken) due to the advanced state of decay of the facilities and the airborne asbestos used in their construction.

Stromness was a relatively small base, yet still gives an idea of the large-scale whaling operations conducted in the island. Built on 1912, its construction was related with the reinforcement of new regulations for the whaling industry, stating that the whole of the whale must be processed, instead than just their blubber layer. After 1930 it was used primarily as a ship repair yard, as a witness of this period the many propellers, spare masts, chains and crow’s nests spread over the area next to the embarkation spot for the zodiacs, on the outskirts of the Station.

The unusual great weather made for an enjoyable snack on deck and sunbathing time (and fore some die-hards even a short swim in the 5ºC waters), before we were brought ashore once more for an afternoon continuation of today’s leg stretch. Now we will follow the steps of the whalers that walked back and forth between the Norwegian station Stromness and the Scottish Leith Harbour. The latter being the largest built in South Georgia. The pleasant hike climbs the headland separating both bays, offering a great viewpoint over the whaling facilities and luckily enough, today also over the high mountains and glaciers far inland, rarely visible as always hid behind a thick layer of clouds.

Fantastic backdrop for the Old Lady Europa, in a sort or old times’ re-enactment, when similar ships could be found elsewhere around South Georgia bays, dealing with the harsh whaling and cargo missions on those treacherous waters.

Good views of Leith from up the hills tell us lots about its busy history, and its industrial atmosphere still could be felt. The Scottish whaling company Salvesen & Co.Ltd was granted the lease of the site, and started operations here in 1909, and in one way or another Leith remained active withstanding good and bad times until 1961. After this date still a Japanese company got it leased, finishing their activities in 1965.

On our way down we can see that Pipits and Pintails share the space with the ubiquitous Fur seals, clear indicator that the rat eradication project has been greatly successful, even around the whaling stations where those rodents thrived, decimating the bird populations.

Before reaching the beach, we make a detour to Hansen Point. This headland is home for a canon allocated here in 1941 during World War Two.  On December 17th, 1940 the High Command of the German Navy intercepted signals from Norway stating the position of a large fleet of whaler boats stationed at South Georgia. Immediately the Germans sent the Auxiliary Cruiser HSK-5 code-named Pinguin, under command of Captain Ernest-Felix Kruder. Shortly after the Germans captured the whole Norwegian fleet, becoming the most successful capture made by any German Auxiliary Ship. After this, the British Admiralty decided to send the armed vessel Queen of Bermuda to South Georgia and set up a few guns at the entrance of the most important whaling stations. One of these, a 4.5" gun was stationed on top of Hansen Point and was operated by Norwegian whalers who were trained for the purpose.

Nowadays it stands as a monument to the human warfare stupidity, as reminder of a sad part of the world history. Much better use of it make the Fur seals, sheltering around the gun and concrete structures against the often-dreadful weather.

From there just a short distance stumbling through a tussock grass field brought us to the beach were soon the zodiacs picked us up. The Europa had sailed around from Stromness to Leith. Once on board we make the short way to the neighbor Husvik Cove, the southernmost inlet of the wide Stromness Bay. There lay the remains of a third whaling station.

Before dusk we still can have a look at the constructions, buildings, oil tanks and at the picturesque shipwreck of the Karrakata. She sits next to a prominent bluff at the end of the main beach, overlooking at the flensing plant. Her 32m steel-riveted hull is hoisted dry on a slipway, still with the pulling cables attached to her, sitting remarkably in good condition. Karrakatta was built in 1912 for an Australian whaling company, then she ended her life used as a boiler and source of steam for the whaling station steam-powered workshop.

The sea bottom of Husvik Cove is slightly better anchoring ground than Stromness and Leith. So it offers better chances to spend a quiet night, to better cope with the forecasted increasing winds.