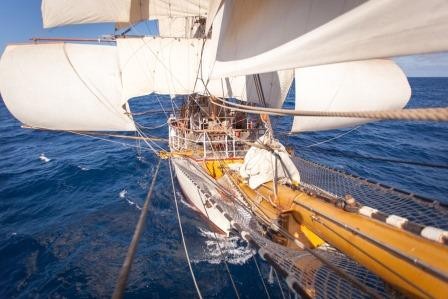 Full in the North-East Tradewinds

12 days Out from Ascension

We are sailing with a speed of around 7 knots to the Northwest, port scuppers in the water.
The air temperatures are becoming more comfortable now. Also the seawater temp is slowly dropping.

The sunset yesterday was yellowish and the visibility was poor,around 3 Miles, the yellow colour was caused by really fine dust from the Sahara that is brought to us with this new Tradewind just after a passage of an Easterly Wave. This morning the sky turned blue again.

On the weather charts from yesterday the first Tropical Storm of this season was appearing in the Caribbean under the name of Alex. But today it turned already into a Tropical depression and flies with high speed and hurricane winds over the Atlantic in the direction of Europe.