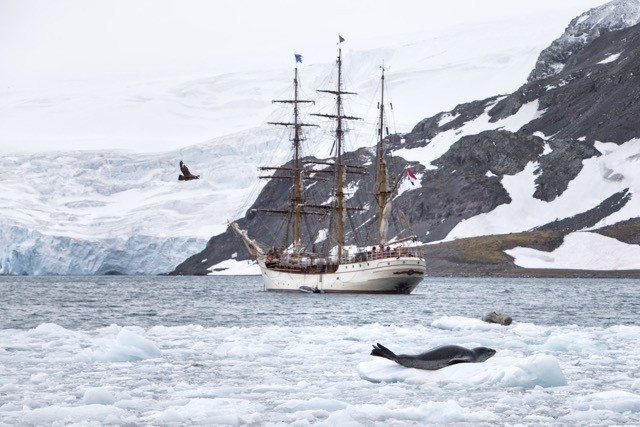 After spending the night at anchor, with enough time to enjoy a quiet time in the bar, watching a documentary about human activities in Antarctica or just having some good sleep after having crossed the Drake Passage and landing at Aitcho, we heaved anchor at around 05:30 in the morning.

Around 06:00 we were already on our way through the English Strait, heading towards Fort Point, the small peninsula sticking off Greenwich Island. Soon we could feel the swell increasing and the wind starting to blow hard up to Force 5 to 6, from the ENE. Time to set some staysails and motorsail. Dekzwabber and Desmond are set and we reach speeds close to 8 knots. As we sail along the East coast of Grennwich island theviews are amazing. The shore is a nearly continuous ice edge, steep, fractured, and in places a brilliant blue. With some big icebergs are scattered around. At arrival to Fort Point, many of us are already on deck to check this spectacular and wild place. The weather and swell conditions in the area were not suitable for landing, but we could enjoy the amazing landscape from deck as the swell was wildly breaking on the shore.

The old name for this site, Castle Rock, is quite descriptive, as the 85 meter high rocks tower into the sky like a real castle.One of the main geological features of the place is the impressive “nunatak” at the end of the beach. A nunatak is a rocky mountain with nearly vertical cliffs on all sides sticking out of the glacier, surrounded by a ring-shaped space separating it from the actual ice cliffs. The dark rocks, once they stick out of the ice, they get warmer than the surroundings and gradually melt this space between them and the ice. The Europa made a 180 degree turn while some of us quickly shot some pictures of the scenic landscape that we motor-sailed away from. Fortunately, we had a good alternative: the more sheltered Yankee Harbour. We reached this site about an hour later. As the Europa approached this sheltered harbour on the southwest of Greenwich Island, the guides gave a quick briefing on the landing area. Meanwhile outside, the crew prepared the zodiacs to bring us ashore. As we came out on deck, we looked around at the scenic landscape that surrounded us. Yankee Harbour lies between Glacier Bluff and Spit Point. The glacier and the steep slope, mainly basaltic, form the backdrop of our landing.

We were fortunate to see many Fur Seals here at Yankee Harbour. Most of them were sleeping on the cobble stone dike, others were engaged in a play-fight. By nature, these animals are very aggressive on land, but rather playful in the water. We slowly zigzagged our way in between them. The bigger males with their long whiskers seized us up but did not really charge at us. Gentoo Penguins were resting too on this beach. A South Polar Skua warned its two well-camouflaged chicks to hide and keep calm in order not to be detected by the potential thread that we seemed to form, even though we went in a wide berth around the bird. The cobbles on this beach have all been smoothened by the erosion of the sea: most of them are (nearly) round and some had beautiful patterns. Others were covered with a bright orange lichen, and we found patches of moss growing in between them - and even a few patches of Antarctic Hairgrass - 50% of Antarctica's vascular plant species! Admittingly, somewhat more spectacular were the four Leopard Seals that were resting on the ice floes amongst the brash ice that covered at least half of the beach line. We were blessed with a nice morning: not too cold, no bright sun either, but a good light for the photographers amongst us. Where the dike connected to the rest of Greenwich Island, we saw artifacts of the sealing area: trypots that had been used to cook blubber from seals. A few meters away from this cauldron lie a young Crabeater Seal that seemed to be wounded on the rear of its body. It is a fact that many Crabeater Seals bear scars from inter-male fights or from encounters with Leopard Seals, but it looked like this one was going to survive.

The other species of seal we discovered was the Elephant Seal, a female or juvenile that was sleeping on the beach, though occasionally annoyed by the fur seals. We walked further inland to see the colonies of Gentoos higher up the hill and around a land mark or some kind of beacon (erected by the Argentines). After some two hours it was time to call in for the zodiacs to pick us up. Katelinn and Emma shutteled us back to the Europa, so we would be in time for our next destination, on the Southern shores of Livingston Island, where we plan to land after an early dinner, in a site called Hannah Point As we sail off the natural harbour of Yankee, the wind conditions allow us to set sail, and the Upper and Lower Topsails are unfurled and hoisted, on a 18knots of ENE wind, motorsailing at 7 knots towards our evening destination. During the afternoon we are called in the Deckhouse a couple of times, first right after lunch for a recap about the morning excursion and explanations about this evening and tomorrow’s plans. As we will try to land after dinner, there will be not much time for full eight o’clockie tonight, so better take advantage of the afternoon to be familiarized with the full day in Deception Island that we are expecting for tomorrow. Later on, after coffee time we gather again, on that occasion for a talk on Deception Island geology by Skinner and then Benjamin introduces the Whale research project that he is conducting in Antarctica. During this trip he is our Scientist guest, very grateful to have the chance of sailing with us and take any opportunity to keep going with the project.

The Chilean Antarctic Institute (INACH-Punta Arenas) is been working on this whale research project since 1993, and this season Europa gave them a chance to join this trip, adding research and science to the regular touristic activities of our program. Lately Bark Europa is introducing some research projects on board so far related with Oceanography, and nutrient distribution in the Southern Ocean, that used the ship as a scientific platform. That gives an added value to our activities, as the “old lady” wanders all the oceans of the world during different seasons. The INACH Humpback whale research in Antarctic waters and Patagonia is mostly based on the photoidentification of the individuals and the collection of tissue samples, mostly for genetic, bacteriological and pollutant concentrations studies. For that good pictures of their flukes are needed, as every single pattern and shape of their tales is individual, like our own fingerprints. Then, once the pictures are taken, they are introduced in catalogues and compared with the collections of other areas, mostly from their breeding grounds in the tropical waters of Colombia, Ecuador, Costa Rica and Panama, where this population of Humpbacks migrate during their breeding season. Looking for matches on the individual pictures we can have a good idea of their migration routes, breeding areas at low latitudes and feeding grounds on those high latitudes.

Then, the tissue sample collection can be done using a modified rifle that shoots darts or a crossbow with the same modified arrow tips, specially designed to take around a centimetre of skin and blubber. With that little sample all the studies mentioned above can be done. During the sailing towards Hannah Point we enjoy the rugged coast of Livingston Island with its huge glaciers and high mountains above. Europa sails close to a couple of impressive icebergs on her way, and we all go out on deck to photograph them. Around 18:00 we are already in the vicinity of Hannah point, ready to have an early dinner and go ashore afterwards. We just needed to wait for a while as the motorvessel Sea Spirit got the place for the afternoon slot. Just after our dinner time all was ready to go ashore. The place was named after the sealing vessel Hannah of Liverpool, which wrecked there in 1820. This site is a microcosm of Antarctic wildlife, and in fact is know as “Antarctica in a nutshell”. Soon we set foot on a beach made out of rounded basaltic cobbles, covered by scatreded all around Gentoo penguins, and Chinstraps as well, on their way to their rockery a bit higher up. Countless Gentoo chicks were waiting for their parents to appear from the water and then running after them to get fed with a regurgitated pellet of krill and fish. Soon they will have to take care of themselves, as they are already almost fully moulted and showing their newly acquired plumage. Up on the rocks several Giant petrels lie down next to their chicks. From the landing site we walked up a hill to a large Chinstrap penguin colony. As we could see before, these species shows a different behaviour, and the yougsters just sit next to where they were born waiting for the adults to come back and feed them, instead of racing everywhere. In the background the terrain is covered with grass known as Deschampsia antarctica (one of the two species of Antarctic vascular plants). The Chinstrap penguins also have quite grown up chicks, but they prefer to stay within the rookery limits instead of wandering around everywhere.

In three groups we slowly continued our way through the densely packed penguin colonies coming across a couple of Southern Elephant Seal wallows. Here they gather all together in dense groups during the moulting season, barely moving for periods reaching around three weeks, while the old skin and fur is replaced by the new shinny one, their new suit for the upcoming year. As we approach them we could hear their growls, but more noticeable was the terrible smell. Some of the individuals we see are adult males, those can reach more than 4 metres in body length and a weight of around 3.5 to 4 Tones in the beginning of the breeding season. Now they are a bit more skinny, after the stressful reproduction period and the fastening during the moulting.

We continued walking across the sandy side of the mountain, down to the large flat beach called Walkers Bay. There we encounter more Elephant seals and penguins, some of them also moulting. And as we walk along the beach several Giant petrels rest on the sand, even a completely white morph, not so common to see, with just some individuals of the population showing this white plumage. Skinner was also happy to show us a collection of plant fossils close to the spot where the zodiacs picked us up. What a beautiful day in Antarctica!!

What a day. Jordi your description of the day is most enlightening. Enjoy the rest of the trip and I look forward to reading many more of your comments.