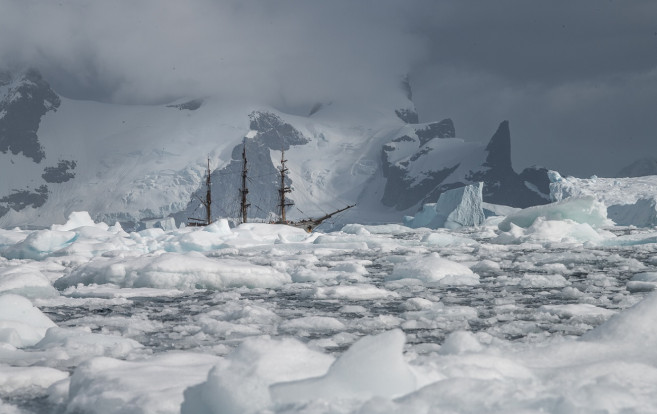 Leaving behind the areas explored by Gerlache during his Belgium Antarctic Expedition (1897-99), Europa entered yesterday, and will spend the next couple of days, in the preferred area of yet another famous explorer, Jean Baptiste Charcot.
His daring expeditions during 1903-05 and 1908-10 explored, mapped and charted the coastline of the West Antarctic Peninsula, continuing the work of Gerlache, but this time reaching the furthest South in that coast, arriving even to latitudes over 70ºS. Twice he came and twice he got into trouble hitting rocks and damaging his ships, first the Français, then the Pourquois Pas? both times he managed not to stop his surveys and adventures. By those years, whalers were already operating in Antarctica, based mostly at Port Lockroy and Deception Island, and he could seek for advise and help over there.

You secretly find out that your keel had been badly damaged by hitting a rock. Do you accept defeat and turn for home, or do you conceal the truth from friends and colleagues and sail back into the ice and uncharted waters that holed her?

One way or another he managed to sail South, trying to figure out if Antarctica was actually an archipelago or a large landmass that could be considered a continent. On his way he stopped at Berthelot Islands, Collins Bay and sure he got a good look at the massive and spectacular Trooz Glacier, where the Europa spent the day.

The increasing Southwesterly winds that started to blow during the night made for keeping a good eye at the anchor site amongst the islets and icebergs of the Argentine Islands. Early in the morning we set course south towards the planned landing site. Soon we can all feel the rolling and the swells, waves break high on the large icebergs that seem to lock our way to Berthelot Islands. A bit to port, a bit to starboard, uncharted areas, rocks awash, brash ice and icebergs, confused seas and 25kn blows. Better to try a different approach, now rounding the western coast of this small archipelago and get close to the land from the south. A plan that worked, gradually getting less and less swell and ice, until finding a suitable calm spot amongst icebergs, a good place where to drift and launch zodiacs for the morning landfall.

The rounded hills of the East-most of the Berthelot islands reveals a multitude of penguins standing on them. Those are the Adelie penguin rookeries, that here at the Western Antarctic Peninsula can be found from this area to further south deeper into Antarctica along the coast.

Soon we all got to visit them. An exciting zodiac ride left us ashore, where the untouched deep snow required to open a new track and keep to it. A winding route that brought its to visit almost all the reachable corners of the island, with its penguin colonies framed by the dramatic iceberg landscape at the background and the high peaks of the Graham land. A desolate tough picturesque place, with a real Antarctic feeling on it. Snow showers keep passing by, while the sun tries to break through the clouds, giving all sorts of weather during the time we can spend ashore.

Back in the ship for lunch, a re-arrangement of plans will follow, and instead of ship cruising the mighty glacier front of Trooz, the new idea is to launch again the rubber boats and enjoy the brash ice and icebergs around on them.
The approximately 100m tall and 1.5nm wide tidal-glacier front of Trooz, seems has been recently going through a massive calving event, and a band of monumental icebergs embedded in a matrix of heavy brash ice and bergy bits shield any closer approach to the actual front of the glacier. With the ship about half a mile from this zone, we embark the zodiacs and head towards the ice. Clouds give way to sunshine, announcing a good afternoon.

A full coverage of a mixture of glacier-ice and sea-ice makes for a thrilling and scenic cruise, slowly manoeuvring and pushing around the floes that surround nicely carved icebergs.

A solitary Crabeater seal snoozes atop the ice allowing for a closer approach. These species are seldom spotted on open waters or rocky islands, like the Adelie penguins, they prefer those icy conditions for living.

Finding easier conditions to navigate through, now the boats face the channels between medium sized icebergs carved with sculptural erosion shapes. Some had been weathered by the wind and waves into spires, others had holes and natural arches. An afternoon to remember, and a morning landing not to forget, in the furthest south latitude that we reach in this voyage.
After that we spend the evening slightly rolling on this same waters before moving northwards a short distance, closing up to where the morning activity is planned and in seek of some sheltered corner for the rest of the night.