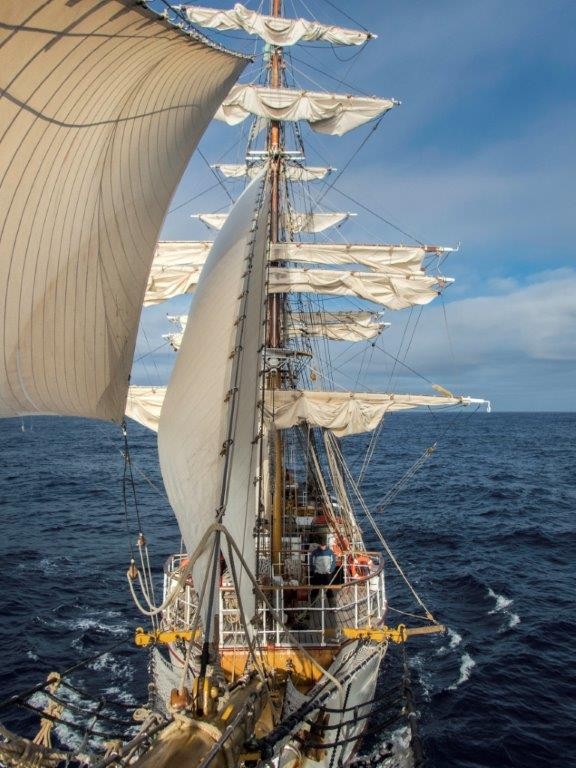 With yesterday’s fair winds during daytime, many albatrosses and other Tristan nesting birds came to visit our ship sailing on their oceanic waters.

At a range of approximately 700nm from the archipelago, as we are now, it is an easy distance for them to wing their way. For us it will take much more effort, planning, sleepless hours and time trying to get to their island. But starting to see them in quite large numbers it also means that we are getting closer to their home. During the last couple of days Europa has been sailing on the northern edge of the Antarctic Convergence area and entered the less productive temperate waters north of it. With this we experience a change in the water and air temperatures, paired with a decrease on the amount of birdlife around us. It is just at the right distance from the oceanic upwelling that takes place around Tristan da Cunha, that we start meeting again increasing biodiversity and richness of the system. There, deep waters travelling on an ocean that reaches between 2500 and 3000 m in depth find the isolated great volcanic building of Tristan and neighbour outer islands rising steeply from the sea bottom. Following the submerged topography, it creates their upwelling, and with it the contribution to the richness of those remote islands’ ecosystems.

The good winds that were with us yesterday died down last night. Before sunrise it was already blowing with less than 10kts from the SSW, becoming afterwards light airs just allowing a steering way and at daybreak Europa meets calm windless conditions. After a couple of drifting hours, voyage crew is called on deck to give a hand. All Square sails were clued up, the remaining Staysails were set and Starboard engine roars for a while, helping the motor-sailing at a speed just about 4kn, on 6kn of N by E breeze. Next sailhandling movement was to gybe the Staysails to Port tack while for a brief period the sun shines on the overcast skies, although we are under the influence of a High Pressure System overtaking us.

It was not until 10:30h when the wind slowly came back, now blowing from a N-ly direction at 12kn. Time to brace sharp on the same tack, steer on a 070º Course and set once more all canvas available with the exception of the Dekzwabber over the Sloop deck. Many hands were available and in no time the Old Lady Europa stretches her wings to the wind. Luckily the motoring hours were just a couple, and we can enjoy again a continuation of a gentle good sailing. Fortunately the sea conditions have been calm and it looks like it will keep being quiet for the rest of the day.

Today crew kept going with the jobs at the bow-sprit. There, during last days some sail changes had happened and bigger sails have been rigged, but now was time for a new addition to its configuration. For first time during the trip the outmost stay, running from the Fore Royal Mast to the very tip of the boom, is been equipped with a Flying Jib. On those temperate climate areas, now 4 sails pull us on the Jib-boom. Fore-Topmast-Staysail, a large Inner Jib and an even bigger Outer Jib, and the higher hovering Flying Jib, with its long halyard and lengthy tack.

Europa tries to adapt to the new sailing area, with milder temperatures that made for turning off some of the heating on board and with some changes on the rig arrangement. With all this and always depending on the whims of the winds, during last 24h counted from noon to noon we sailed 100nm, on a good 048º average course. That means we have still 691nm to cover to get the Tristan da Cunha shores.

The rest of the day was characterized by good and placid sailing. To keep a convenient course it was necessary to brace squarer, drop the Fore Topmast Staysail and equip the Courses with the whisker-poles stretching them to better catch the now blowing W-ly winds. With a bit of ups and downs in the wind strength and varying directions from W to WNW.

There's an island SSW of Tristan called Nightingale Island which may have been named after an ancestor of one of the passengers on your ship. Will you be visiting that island as well as Tristan? I understand there may be some pirate treasure hidden on Nightingale Island.