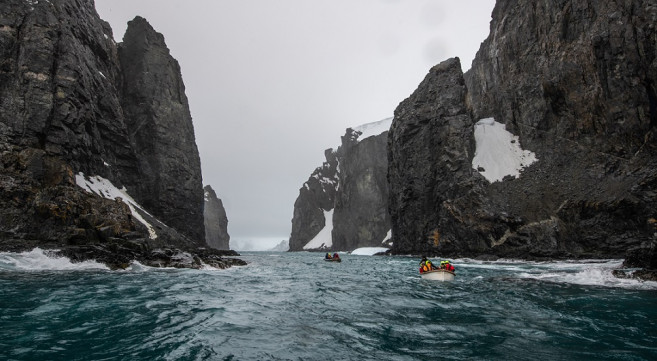 The Bransfield Strait, with its 100km wide and open to the West to the Drake Passage, runs for about 300km in length in ENE-WSW direction, and separates the South Shetlands from Trinity Peninsula and the Joinville Island group. Is named after Captain Edward Bransfield, who sailed here on the first official surveying expedition by the British Navy in January 1820. William Smith, the merchant man who first discovered the South Shetland Islands piloted the ship. After sailing into this ample body of water, they still thought it was a gulf more than a channel, as in its southern end it becomes narrower. From that point onwards it is called the Gerlache Strait.

Gerlache is yet another of the big characters in the history of Antarctic exploration. Adriene de Gerlache was the leader of the Belgian Expedition of 1898 on board the bark Belgica. They actually cheated and explored all along the area where our trip is planned. It took for them two years, including the unplanned overwintering, the first ever in Antarctica. This expedition named no less than 88 geographical features, before returning to Punta Arenas (Chile), where they arrived on the 26th March 1899.
A trip that changed the way many though about Antarctica, and the possibilities that the last continent to be discovered by humankind had to offer. Including the beginning of bigger plans, new ideas, new exploits. Like the possibility of reaching the South Pole itself. Roald Amundsen, the future Polar Legend was amongst the crew of the Belgica. His experiences on this trip planted a seed on his mind, that ended up germinating in his successful attempt to the South Pole in a sort of race with the British Scott close to the change of year between 1911-1912.

Before that, other important expeditions sailed these waters too, between them the Swedish Antarctic one under Nordenskjöld between the years 1901-04. Famous for their adventures and misadventures in the Weddell Sea, they visited, charted and named several areas along the Western coast of the Antarctic Peninsula as well. Amongst them the spot where the Europa drops anchor this morning, at the southwestern shores of the large Trinity Island, next to the smaller Spert Island, and facing a towering glacier front.

The harsh beauty of the area can be better experienced from the small boats and Sloop. Despite the windy and rainy morning, soon we are out braving the weather and waves, driving in-between basaltic cliffs crisscrossed by dykes, narrow channels and gorges cut through the mighty rocky walls and their numerous hanging glaciers.
Its impressive to manoeuvre the boats in the middle of the swell breakers, the shallows and a couple of icebergs.
A handful of Gentoo, Chinstrap and even some Adelie penguins rest at the snowy slopes at the sides of the channels, where also several Weddell seals snooze.

Wet, cold and spectacular cruise, sure not leaving anybody indifferent facing the harsh climate and severe scenery of Antarctica.
The day followed making way towards the scenic bay of Cierva Cove, where the glaciers Breget and Gregory calve their fronts into the sea. The three names are related with pioneers of aviation. Jacques Breguet (1881-1939), was aFrench aircraft designer who built and flew the first helicopter to carry a man in vertical flight, in 1907. Franklin Gregory, was an American pioneer in the development and use of helicopters. And Juan de la Cierva (1895-1936), Spanish designer of the autogiro, the first successful rotating-wing aircraft, in 1923.

To get there, fair winds allowed to do some sailing, and despite the bad weather many hands joined to set Topsails and Top Gallants, stop engines and make way south under sail along the northern entrance of the Gerlache Strait.
Humpbacks were spotted here and there, one of them showing a large injury on its tail, missing half of its fluke, probably after a bad encounter with a large ship and its propeller.

At arrival in the evening, Cierva Cove, the bay is pretty filled with brash ice and at its southern shores lay stranded some large icebergs. Captain skilfully steers the ship cruising closer to the glacier fronts, while surrounded by the ice for the great amusement of everybody.