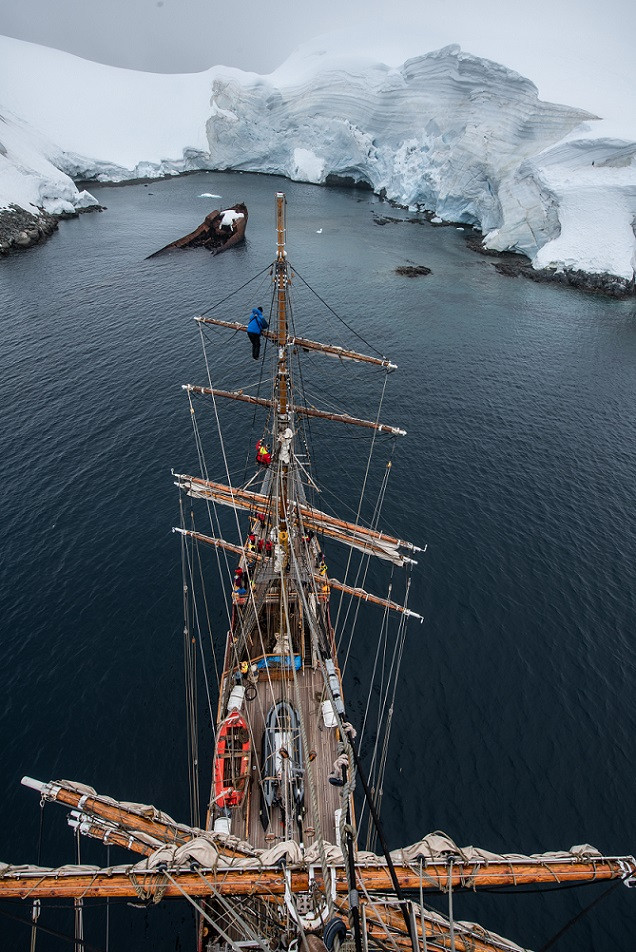 Foggy morning at our approach to the scenic Graham Passage, the glaciated and narrow channel separates Bluff Island from the West coast of Graham Land, the Antarctic Peninsula mainland. Captain Skidsmo named it after his whale catcher Graham, which was the first to pass through it, on March 20, 1922.

Humpback whales swim at its entrance while Europa manoeuvres amongst glacier fronts and the icebergs that sprinkle the passage. As we sailed in, visibility improves though still cold and cloudy, with 15 to 18kn of Northeasterly winds.

At morning coffee time the engines slow down and Captain gets ready for steering the ship into the little coves and channels on Nansen and Enterprise Islands, where we start to see the bow of the Gouvernoren shipwreck. Skilful and careful manoeuvres got us very close her, while many gather on deck, some aloft, for an exceptional vista of the wreck.

She lays half aground half sunk in a small cove with the same name. Her history dates from the golden ages of whaling in Antarctica, but in the middle of her operations she caught fire and was intentionally ran aground after not being possible to extinguish it, mostly due to her carrying 16,000 barrels of the valuable, though easy flammable, whale oil. The crew and part of the cargo were savaged, but since 1915 she rest here as a witness of those times.

The small archipelago where she has been since marks the northern entrance of the large Wilhelmina Bay. Adrien de Gerlache with his bark Belgica was the first one charting the area during his expedition in 1897-99, and naming it after Wilhelmina, Queen of the Netherlands, (1890-1948).

Not much later it became well known to whalers, becoming one of the major centres of the whaling summer industry during the period 1915-30.

Being 15nm wide, it took a while to sail it along, but everybody was favoured with good views of the large icebergs that had made their way here, though the rain fell continuously during the day.

Antarctic Peninsula high mountains and glaciers frame the scenery, peering out the grey rainy clouds, while humpback whales are spotted now and then on the choppy waters.

The Western Antarctic Peninsula is home for the feeding grounds of the so called “G” population of Humpbacks, which are breeding in the tropical waters of Colombia, Ecuador, Panama and Costa Rica.

Dealing with the bad meteorologic conditions we keep going on, next destination will be Orne Harbour, still some miles away.
The spot for the afternoon landing is a picturesque bay amongst the large glaciers of the Arctowsky Peninsula, of the mainland Antarctica. It is barely about 1nm wide and was also one of the discoveries of Gerlache in 1898.

Weather didn’t change much for the rest of the afternoon when we set foot at the steep shores of Orne. Cold weather and rain didn’t stop falling while we climbed up a path through a snow slope leading to a rocky ridge, where a relatively small rookery of Chinstrap penguins is located.

They have a long climb through noticeable highways back and forth from the shoreline down below. From there still the 285m high headland called Spigot Peak tower over our heads.

Regardless of the rainy conditions, the views from up the saddle are always breathtaking. The lower slopes of Anvers and Bravant Islands are visible, framing the Western side of the Gerlache Strait. Ronge Island with its high peaks is just in front of us, at the entrance of the Errera Channel, where Danco and Cuverville Islands are. The latter one is where we plan our evening landing. For that an early dinner was planned and straight away, with the ship drifting and manoeuvring amongst icebergs, we were all ready to disembark in Cuverville, yet another place discovered by Gerlache’s Belgian Antarctic expedition, and named for a vice-admiral in the French Navy.

While getting into position for launching the boats, a pod of Orcas swim by at the distance, heading north at a good speed.
We all set foot ashore on the Northeast beach of the island, surrounded by round rocky outcrops sticking off the snow providing good nesting grounds for one of the largest, if not the biggest, rookeries of Gentoo penguins. Usually these species breed on smaller colonies, being this landingsite the exception to their un-written rule.

The penguins here still lay on their eggs. Cuverville is further south location than the other colonies we visited so far, fact tat delay the beginning of their nesting season.

A crowded beach crisscrossed by countless penguin highways leads to a snowy slope. Up the top is where the highest nests are. Good little hike for an impressive view and a bit of exercise, before embarking the ship again. She will spend the night heading South to new Antarctic adventures.