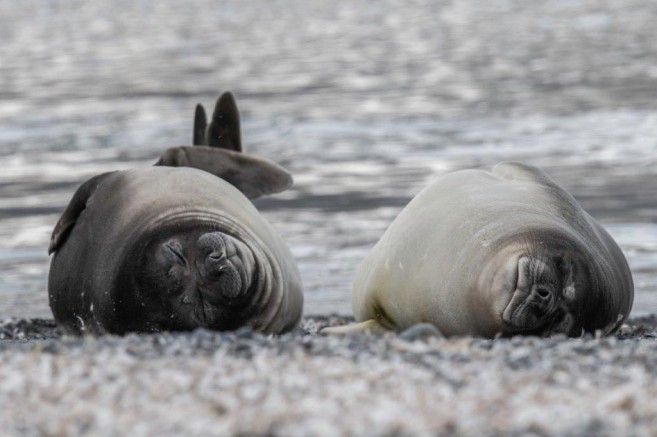 For this voyage the Europa has thirty-nine voyage crew, seventeen permanent crew, and about one thousand seven hundred and eighty-three cameras and lenses, excluding smartphones. (Ok, that might be a slight exaggeration, but you get the picture. Or pictures – currently running at the level of two per penguin. And there are a lot of penguins.) Some of the optical goodies came out during the passage from Uruguay. There were – as would be expected – a lot of followers of the long established faiths of Canon and Nikon. Many of these were the latest and greatest, with Full Frame megapixels a-plenty. Hans, as always, chose not to follow the crowd and was seen sorting one of Nikon’s early attempts to convert the masses to the wonders of mirrorless. We also saw one disciple from the Pentax Orthodox creed, and quite a few from the born-again Sony sect of the once great Minolta faith. The ancient book of Olympus had a few evangelists on board, and even a prophet of Panasonic Lumix mirrorless was sighted. A couple of bridge cameras and numerous conveniently compact cameras rounded out the picture. Many carried two or more camera bodies – and why not, for we have two hands and two eyes? And we noticed that the insidious whispering of Sigma had caused many to stray from the narrow path of the truly devout when it came to choosing lenses with their fiendish temptations of high quality glass for less money.
On the passage no albatross was safe during daylight hours, as a gaggle of wildlife photographers would track it with long lenses and capture perfect pictures of the sea where it had been just moments before. The dolphins were somewhat more compliant, and fulfilled their contractual duties by an extended studio session next to the bow while the weather was still good and it was possible to use cameras without gloves.  Icebergs were shy initially, and the ship itself was used to justify packing the wide angle lenses. It was once we hit South Georgia that the real equipment emerged. Those
thinking they were in the game with a 300mm lens suddenly realised how badly they had been outgunned, and the penguins caused the tripods to suddenly appear. And the South Georgia climate allowed those with weatherproof cameras to test whether or not they were actually weatherproof. The guides led the way. They were divided between the Canikon orthodoxy, but even here the temptations of Sigma were seen. And they clicked away mightily, and swapped bodies and lenses with a practiced fluidity. And presumably storage cards as well, for at the rate they clicked away the
half-life of a 128Gb card would be around seven minutes. Jordi wandered from photo-opportunity to photo-opportunity, carrying his cameras, lenses and what could have easily have been mistaken for a small bazooka. The rest of us hauled ourselves laboriously up the same sheer and frictionless slopes to see what he was shooting, with Sarah skipping up behind to make sure we all made it, her familiar paddle attached to the outside of her waterproof camera bag. But even Jordi met his match. “We’re landing at St Andrews tomorrow,” said Nilla. “Bring everything you’ve got.” Her eyes fell on Bruce. “Well, maybe not everything you’ve got.”