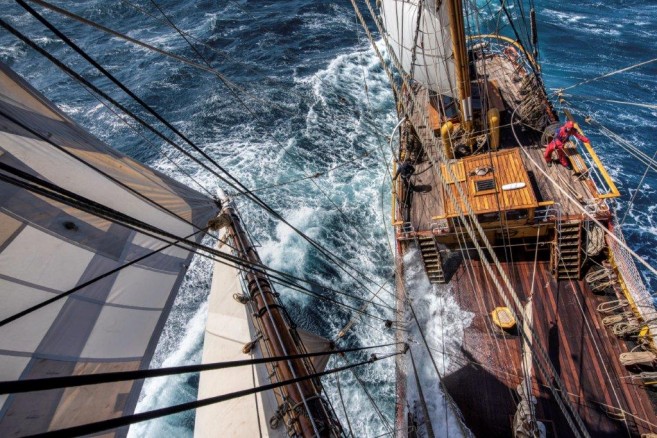 Last night, sailing fast and straight South into the northern edge of the Weddell Sea, we found ourselves at dusk in heavy seas while several growlers and bergy bits started to be spotted amongst the breaking waves. Having reached a latitude over 60º S but still 175nm east of the South Orkney Islands, it was time to wear the ship and start heading on a northerly course, close to the wind and steering as much as possible to the NW.
Many joined the manoeuvre before midnight, bracing, striking some sails and setting them again on the opposite tack. Suddenly, Europa started heeling to starboard to the surprise of the ones in their bunks or indoors. Being used to sail continuously on a close-hauled starboard tack for the last days, all items stowed in the port side of cabins, galley and common spaces at once seem to come alive, changing their minds and sliding to the opposite side of the ship. Steering the heavy rolling ship in the freezing cold, showered occasionally by waves washing up the decks and realising that we turned
around and are heading into a NW-ly direction, sure may sound discouraging to many on board, but nobody ever said that sailing the Southern Ocean to the remote Antarctic regions was an easy task. The well known traditional names of the latitudes we are sailing: The Roaring 40’s, The Furious 50’s and The Screaming 60’s are giving a good hint on what might be expected if anyone has the audacity to venture into their windy and cold waters. There is a reason why in the old times many tried unsuccessfully to figure out the existence of what was called “Terra Incognita”. Including the courageous Captain Cook in the 18th Century, who after three expeditions and a complete circumnavigation of Antarctica while jousting with gales, storms and ice covered waters, never even saw the elusive land.
In the persistent conditions we are experiencing, strong W-ly winds and big swells, driving us South first then Northwards, and keeping the ship at about 176nm from South Orkneys (for two days now), the best thing to do is adapt body and ship to the wild conditions and endure the adventure, that with all our efforts will bring us to the coveted pristine shores of the Antarctic. While we struggle in the gale force winds, flocks of Cape petrels seemingly oblivious to the harsh conditions, pay us a visit fluttering around the ship for hours, today bringing with them another bird, a truly Antarctic species, the beautiful Snow petrel.