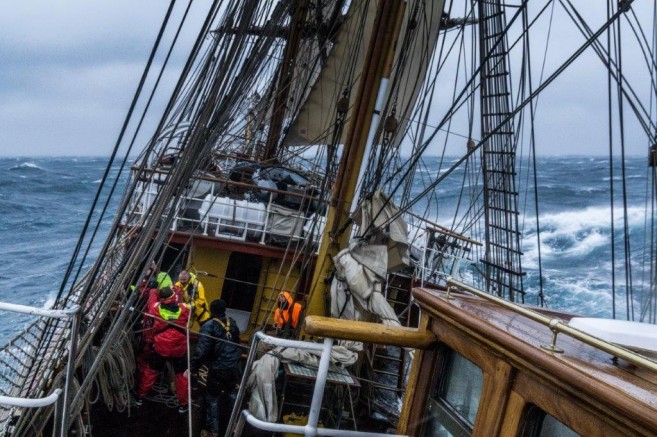 The decreasing winds during the early hours of the day put an end to the nice sailing we were having. After 02:00 in the morning it was time to strike all square sails and most of the Staysails, brace sharp to port tack and hear the engines roaring pushing us at about 6kn on a good 150º course. At dawn we are welcomed to daylight with overcast and rainy skies that lasted for the whole day.
Another of our patchy sails ripped during last night hours of sailing. Being a thinner and older sail it was one of the last pieces of canvas still remaining from the calmer and less demanding tropical sailing. Time had come to stow it away after repairing and substitute it by a sturdier sail. The operation of bending it on kept the watches busy for the morning and part of the afternoon.
But a wind and weather change was hovering in the air over our heads. The violent passing of a low pressure system was announced by a calm period previous to the stormy conditions. These frontal passages are usually preceded by light conditions, that could trick unexperienced crew to set more sail under the inviting calm situation. But keeping a close look at the evolution of the atmospheric pressure, a sudden change could be expected at any moment.
Thinking ahead and making use of the sixth sense that good sailors seem to have, Jelte and Eric decide to start reducing sail surface. Like this, crew sprang aloft to start furling canvas and brace the yards accordingly for what was about to hit us, clewing up squares and taking away staysails starting right after the 14:00h change of watch. First royals and topgallants are furled, followed by upper and middle staysails, just then we ran out of wind, announcing a sudden change in the weather. And indeed the light breeze blowing from an E-ly direction, veered in no time becoming S-ly with variable force and occasional gusts. All indicating that the centre of a low pressure system was passing over us.
Not much later a full force gale came upon us at once starting with a 30kn blast rapidly increasing, and heavy rain. From then on we kept braving the heavy seas and the blows up to 50kn while quickly reducing more and more sail, to leave at the end just the small aap (mizzen staysail) as storm staysail set over the main deck. The storm filled the air with sea spray and kept the decks awash as the
big swell and waves crash against the port side of our hull. The fierce windy situation, heavy rolling and the heeling to starboard made for really demanding and challenging works to be done up the rig and on deck. From then on, Europa drifts on bare poles, braving the untamed seas fuelled by the boisterous winds, just with the small staysail aap sheeted on port tack, set to produce enough windage in the rig to keep the bow slightly into the wind. Once the first stormy outbursts had passed, ropes and sails have been stowed and coiled, is time for the tired and wet crew to gather. Their talks, laughs and repairing projects come around the review of the damage sustained after coming across the wild winds that often pay tribute to the nickname of the latitudes where we are sailing at the
moment, the Roaring 40’s. Main upper topsail clew corner ripped, several buntline lizards of the forecourse had broken. The fore course starboard turtle block broke off. From mid afternoon onwards, while enduring the storm no lookouts or steering by voyage crew were needed, we simply hung-on and trust our sturdy Europa to stand up to the high seas and strong wind, drifting towards the WNW a total of 16nm. Then, gradually the wind eased down allowing for setting some canvas after bracing around and starting our engines now pointing once more towards our destination. Like this, lower
staysails are gradually set together with the Spanker.