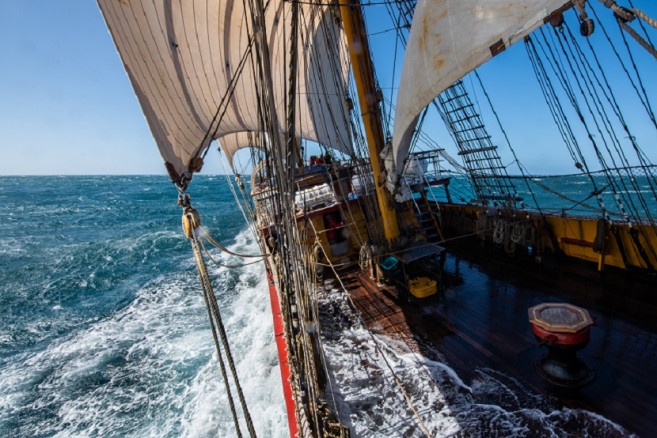 Good sailing on shifting winds. Blows over 30kn easing down and backing. Later on veering again to a Westerly fair breeze.

The awe-inspiring majesty and mystery of the sea itself, its dead calms and vaulting storms, the infinite variety of its sea life, its salt sting and bracing airs, its immense and somehow life-affirming emptiness, and its terrible unforgiveness.

A day of strong Southwesterly winds develops at the end on a fair Westerly breeze; a good few hours of exciting close-hauled on Starboard Tack becomes a broad reach sailing. Winds that pull our sails on a good course to South Georgia. Winds that lift the wings of the oceanic birds that show up today in increasing numbers. Elegant Black browed and the magnificent Wandering albatrosses seem to enjoy those conditions, appearing and disappearing below the swells and soaring over the high seas. On their wake a full array of other seabirds join. The surprisingly tough Wilson storm petrels flutter their small wings above the breaking waves, higher up Soft-plumaged petrels brave the ocean with their waving gliding flight. Now and then another of the significant Ocean wanderers can be seen, the Great shearwaters. With them we share oceanic paths, their migratory routes take them from their breeding grounds at Tristan da Cunha archipelago and Falkland Islands to the medium and high latitudes in the Northern Hemisphere.

A good day too for spending some time trying to identify and count their numbers for a few minutes as they fly around the ship. Bark Europa is participating this year on several of the projects framed into the Citizen Science concept, and one of them links us with a Southern Ocean Seabird Survey. The idea of this projects is to use the ships that most often sail the Southern Ocean (that would be the several touristic vessels which are on those waters during the whole of the summer season) as surveying platforms. In this way involving the passengers and voyage crew actively on their development.

From a calmer day, the changes on the weather started late last night. The wind first backs to a Southerly, so, to keep a good course to our destination and take a good advantage of that, we gather on deck to change tack and sail close-hauled on winds that gradually pick up to over 30kn. Top Gallants, Outer Jib are doused and furled, Fore Top Mast Staysail is hoisted. Sail configuration that we will keep for most of this sunny day. As the hours pass by, the ship heels to Port side, now and then the decks take water from the swells crashing against the hull. But just for a handful of hours, as soon the conditions start easing down, making for setting more canvas. In the afternoon Top Gallants are sheeted down and hoisted again, the Royals afterwards during the night. Same time also when the fair breeze veers and becomes a good Westerly, making for bracing squarer and stretch the foot of our both courses on their whisker poles, pulling down and furling Spanker and Lower Staysail on more of a downwind course.