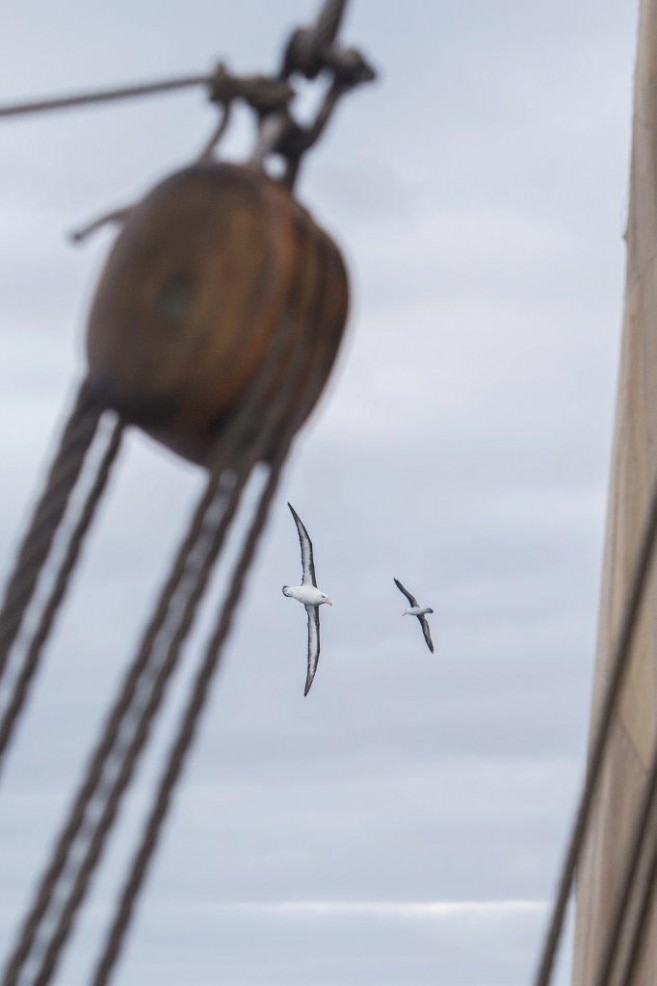 The good winds and calm sea conditions had been with us during the whole day. Europa sails close to downwind until the night, on a straight course towards Falkland Islands. All squares are set, together with Outer Jib and the Spanker and Gaff Top sail in the Mizzen mast.

Sailing almost downwind makes it a bit more difficult to steer the ship in a steady course Southwards (175º) and we have to keep the concentration when taking our turns at the wheel. On that fashion we have sailed 131nm during the last 24 hours, now just 300 nm left. All an all we have sailed already 750nm since we started, miles and time enough to gradually get more and more familiar with the sails, ropes, the Europa way of sailing and special way of living.

The main feature of the day had been the low swell, a bit of sea waves growing around us and the fair N-ly breeze, variable on force between 12 to 18kn along the journey, thus allowing us for some nice wildlife sightings.

From early on in the morning, several whales were spotted. First a couple of Southern Right whales and a bit afterwards also a handful of Fin whales. These species prefer to hang around and seek for food on the offshore waters close to the edge of the Continental Shelf, as the depth increases. We are actually sailing in quite shallow waters between 100 and 200m, but further away from the coast (about 180nm) and closer to the shelf outline (about 60nm from it). At the same time of this observation, a few Peale’s dolphins join us for a few minutes. As the day starts and the sun rises, beautiful patterns of sunrays show in-between the cloud cover, while countless birds fly around, including Black browed side by side with a few majestic Wandering albatrosses. A great deal of Giant petrels glide over the waves as well, stopping here and there waiting for stronger winds or trying to catch some of their food.

Also small flocks of the beautiful Cape petrels accompany us during the day, shoulder to shoulder with small numbers of Southern fulmars and one or two of the delicate looking Wilson storm petrels. While all this was happening out at sea, on board the crew kept going with their maintenance program up the rigging and putting together the rubber boats that so far had been stowed away. In the meantime our engineer Divein was busy checking the outboard engines that soon will be in use to drive us ashore in the zodiacs, once we reach Falkland Islands.

The conditions changed slightly during the night, with the wind veering and becoming NE-ly, blowing at about 15 to 18kn. This new situation allowed us to set the remaining Staysails, but the Dekzbabber and the Fore Top Mast Srtaysail, that still would be shadowed by the Courses.