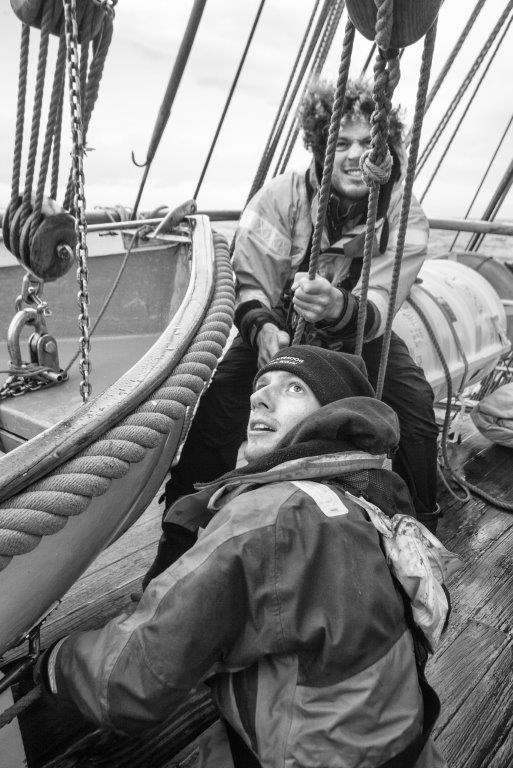 The new day brought us the only good chance for sailing during our Drake Passage crossing, just when getting closer to the lands of the Southern Patagonia and Cape Horn Archipelago. By breakfast time the incessant NW-ly strong winds we had been experiencing during the last days starts backing, becoming W and WSW-ly, blowing a good breeze of about 15kn. In these conditions it was time to get ready, climb aloft and start unfurling the canvas that has been stowed away for the last days. A priori all sails could be set, but when the crew is up the masts and yards getting all ready, the light winds quickly increase to over 30 to 35kn. Many of the sails that were already unfurled had to be packed again, while topsails and courses together with the lower staysails pull the Europa at speeds over 8kn on a N-ly course, braced close-hauled and starting to heel heavily to starboard side. The sailing even gets more and more exciting as we cross several squalls on our way, that leave behind stronger gusts up to 42kn of wind and rain showers. The exhilarating sailing refreshes all of us, including the crew that has been eagerly hoping for some good winds to set sail. For six hours Europa shakes off the fumes from her two engines that had been non-stop turned on for the last four days and seems to also feel happy unfolding her wings to the good wind as she approaches land. Actually, the first island from the so called Wollaston Archipelago, that includes the mythical Cape Horn, comes into view at our port bow around mid-morning. A long-awaited sight after all those last past days facing the open oceanic waters of the Drake Passage. Abundant wildlife also seems to welcome us to South American coastal waters. Countless Black browed albatrosses fly around, accompanied by Giant and White Chinned petrels. Amidst all of them, the majestic Wandering albatrosses soar effortlessly on the strong winds. Peale’s dolphins bowride the ship, leaping graciously out off the water.
In the first hours of the afternoon it was time to strike most our canvas, leaving the Lower Staysails set and start both our engines, as it has been usual since our departure from Antarctica. Our Northerly course has brought us east of the Beagle Channel entrance, now Europa has to steam into the wind to reach it, with the idea to drop anchor at one of its pilot stations, Punta Davison, where a quiet night is expected waiting for the mandatory pilot to bring us to Ushuaia tomorrow. Nowadays well known and charted, the Beagle Channel played a great role in the history of exploration and science of the southernmost area in South America. To start with, the main waterway connecting Atlantic and Pacific Oceans, separating mainland Patagonia from Isla Grande de Tierra del Fuego, was found by Ferdinand Magellan in 1520. The open seas south of it had to wait until 1577 when fate and unexpected storms brought Sir Francis Drake to the passage that now bears his name. Then in 1616 the Dutch sailors Schouten and Lemaire brave the southernmost headland of the Americas, calling it Cape Horn.

But the narrower and somehow hidden Beagle Channel, that cuts Tierra del Fuego from the outer islands was not named, explored and properly charted until the first exploration trip of the “HMS Beagle” during the years 1826-30, that consisted of a survey and mapping expedition of Tierra del Fuego, commanded by Prinkle Stokes. Unfortunately, he committed suicide half way during this mission, leaving the ship to Lieutenant Skyring, who brought her to Rio de Janeiro where Robert Fitz Roy was made captain. He commanded the legendary “HMS Beagle” second expedition that lasted from 1831 to 1836. Captain Fitz Roy, aware of the difficulties and loneliness during the planned long trip, asked for a companion for the voyage, with scientific tastes, willing to do naturalism research and share his dining table. Like this the young Charles Darwin was invited to join the voyage. None of them knew by then that they were about to sail together in a trip that changed their lives and, after Darwin’s observations, changed also the story of biological and geological sciences. Puzzled by the geographical distribution of wildlife and fossils he collected on the voyage, Darwin investigated the transmutation of species and conceived his theory of natural selection in 1838, published much later, in 1859. By the evening Europa drops three shackles of anchor chain in this illustrious Channel, indicating the end of our hazardous crossing of the Drake Passage and the closure of our open ocean journey and soon the end of our great trip to Antarctica.

Good luck guys, wish I was with you, hope Wayne Ashford is shaping up, please let him know that we are following his adventure from Anglesey in the UK

Jordi,very interesting to read.Also I have two friends joining you on March 03,2018 at Ushaia .They are John Nightingale from Lethbridge,Alberta in Canada and Bill Tarver from England.If you say hello for me and wish a good trip for me that would be great.Thank you , Kal Holloway....