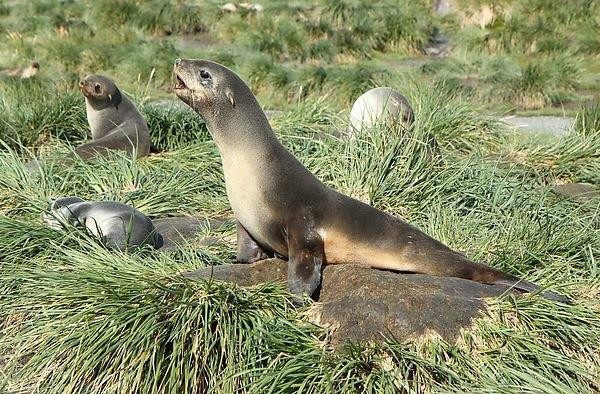 After eight days and nights of sailing we arrived in South Georgia.

Compared to the world of rocks, ice and snow in South Shetlands and Antarctica, it seemed like a green paradise. Of course far from tropical, it was still a harsh landscape with rocky mountains, glaciers and no trees, but the lower altitudes were covered with grass and moss, which gave the island a friendlier appearance.

Fur seal pups were playing in the water and on the beaches, or resting on top of patches of tussock grass. Penguins waddled in between, elephant seals lay in big groups and made burping sounds on the beaches, albatrosses, petrels and other sea birds flew around, all busy in their own activities. Overall, wildlife was even more abundant as it had been on Antarctica, and there were some new species and more youngsters to see. On Antarctica, the breeding season had already finished at this
time of the year.

We had a wonderful welcome by king penguins, who swam to our ship in large numbers curious to see who were coming for a visit. Shortly afterwards we had our first landing at Right Whale Bay and were able to observe them on the land too. Unlike smaller penguins, king penguins live on the island all year around and don't all lay their eggs at the same time, so we were able to see their offspring in all stages of development. There were mothers taking care of tiny chicks and brown fluffy youngsters already walking around on their own between thousands of bright white-orange-grey coloured adults.

The following day at Salisbury Plain we visited an even larger king penguin colony and had our first experience of the terrain. Due to large swell we couldn't land at the main beach but had to search for a more protected spot around the corner. From there, it was a 2 km walk to the colony over tussock grass and along the beach. The grass, which looked like a green mat from the distance, consisted of big patches with mud in between. Seals were lurking in every direction; some of them still mothers feeding their pups, which made it a small challenge to find our way through. Sandra and I didn't mind, for us the walk turned out to be as interesting as the colony itself.

Our first day in South Georgia was cloudy and partly rainy, but during all the other five days we were lucky and had sunny weather. The sunshine made the mosses on the ground shine in various shades of green and the landscapes were magnificent. We did a few hikes which brought us a little bit inland and to lookout points up to about 300 meters of altitude. All the wildlife was concentrated near the sea, so it was quite a difference between the busy and noisy shores and the calm, quiet inland. We walked in a group but had many breaks and it was possible to sometimes stay a bit behind to enjoy the silence.

Day by day on both Antarctica and South Georgia we got more used to all the animals around us, but never became bored to observe them. It was simply wonderful to be able to see all of them so close and still in their natural environment, unlike in any other place we had earlier been to. Penguins remained our favourites; they were simply so cute and funny that it was hard to resist not to give one of them a hug. When the days were up and we started sailing east, it was a slightly sad moment to say good bye to this very special corner of our planet.