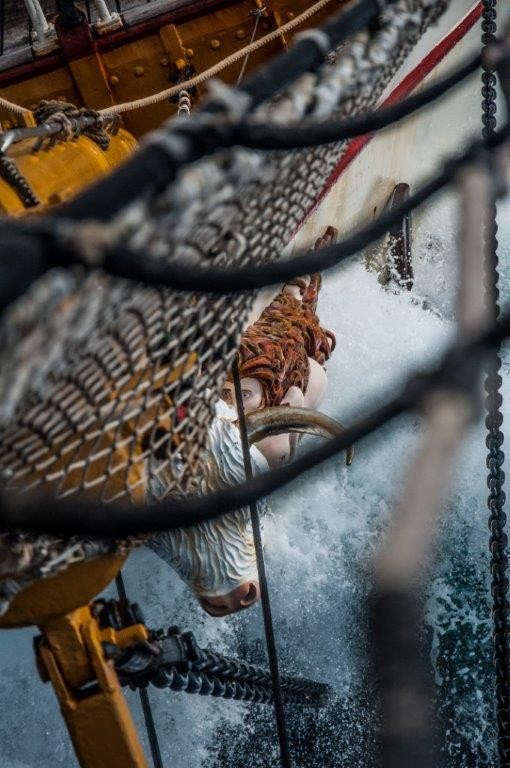 SOUTH ATLANTIC OCEAN.
Another great day of sailing, over half way between Tristan da Cunha and South Africa.

During the whole day Europa runs her last Easting day at good speeds between 7.5 and 9kn on yet another superb journey of sailing at latitudes at the verge of the Roaring Forties. But the changing weather and winds make for a busier day of sailhandling than the past ones.

From full sail, today gradually we started striking canvas, beginning already during the night when we take away higher Staysails and Flying Jib, on increasing winds over 20kn from the North. Later on, in the early morning, still on winds tending to slightly rise a bit more, Gaff Topsail is taken down and furled as well. Nevertheless Europa rides the South Atlantic at speeds over 8kn on her Eastbound course.

As the hours pass, the sunny morning brings further increasing wind, blowing over 25kn from the North, that made for taking away and furl Mizzen Top Staysail, Main Royal Staysail and Dekzbabber, while the ship leans heavy to Starboarside, sailing Beam Reach, with the wind at 90º of our course. The High Pressure System that Europa has been riding, now moves faster ahead of our position and already starts trying to squeeze around Cape of Good Hope, and behind it a Cold Front is starting to affect us.

It comes with growing seas and rising winds, veering first to N-ly as we are already having, then slightly backing again to NNW-ly. Besides this, quick shifts on the winds are to be expected. As the warmer air from the back side of the High Pressure overtakes us, is being lifted by a wedge of cooler and denser air coming behind. This causes the Barometric Pressure to drop, as were are experiencing today, and an increase on the instability of winds and weather, as along the frontal passage usually grow a line of showers or squalls. As we start meeting with those conditions, Europa’s rig start to be prepared for them, and during the afternoon more sail is taken off and furled.

As the leading edge of this cooler mass of air reach us, the gradual changes along the journey brought us from a full sail configuration to find ourselves under Squares all the way to Top Gallants, Inner Jib and Fore Top Mast Staysail on the jib boom, the small Aap over the Main deck and the Spanker at the Mizzen Mast. Nevertheless, still with a bit smaller amount of sails set we keep the good speeds of 8 to 9kn, thanks to the increasing winds, taking advantage of the new meteorological situation. But after the quick Lower Pressure front passing by, lighter W-ly winds are forecasted. However those backing winds will still be favourable to our sailing, for today we reached the end of our Easting run and is time to start changing course to a more NE-ly direction.

Westerlies again would mean a good sailing on a good Broad Reach changing to Beam Reach as we turn more northwards. Getting closer to Cape Town and the end off our epic voyage, for many starts feeling like we are really on a after-expedition homebound trip, and excitement loiters over several of us while checking the good speed and average mileage covered daily. But not all is said and finished yet, being in a sailing trip and trying to cover the maximum distance under the Europa canvas spread to the wind, bring us to a large degree under the will of the ocean, weather and winds.

Regardless of having sailed already over half of the distance between Tristan da Cunha and South Africa (873nm), the 806nm still ahead of us can still give us many surprises. During the next days, we will have to face weather changes, shifting winds and strong ocean currents. Talking about those ones, soon we will fall into the influence of the Agulhas Current, that flows southwards along East Africa and when reaching South Africa and the Atlantic Ocean, with its strong West to East current, turns back to the Indian Ocean. At this point, an area of high variability is created characterised by the eddies released from Agulhas into the South Atlantic. Being on the appropriate side of those eddies is important for the sailing and navigation, as the strength of their flow can be of a couple of knots.