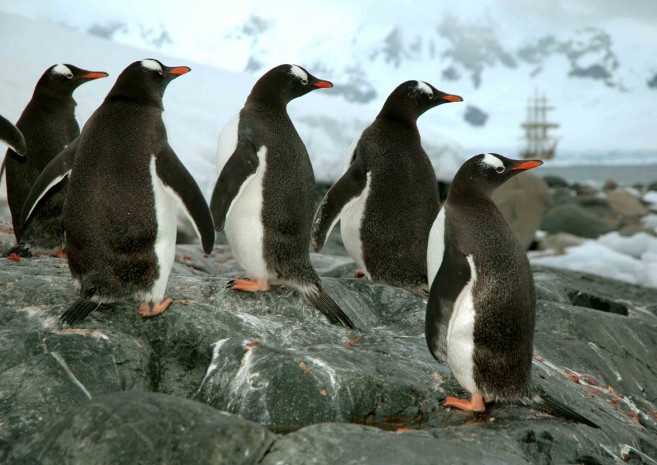 Last night we hove anchor from Whalers Bay soon after everybody embarked
from the last landing of the day, and we motor our way out of Port
Foster through the only entrance to Deception Island, the spectacular
Neptune’s Bellows.

Once in the open waters of the Bransfield Strait, there was enough wind
for trying to sail, around 15knots from a NW-ly direction. All canvas
available is set and the engines stopped. Sailing in Antarctica, a great
way to start the New Year 2016! And then… Deckhouse and Bar were busy
until the early morning.

When the early birds started to get out of their bunks, the sails were
being taken away and furled during breakfast, as we get close to the
destination for today on the Southwest corner of Trinity Island. It was
not until 10:00h when we actually arrive to the area, a blessing for the
party animals that last night kept our bartender Zeze busy until late.
The plan is to divide into two groups, one to do a Zodiac cruise in the
morning, the other after lunch, and to explore the narrow passage
between Trinity and Despedida Islands. As we arrive at our spot, the
Zodiac’s and Sloopy are launched and soon boarded, while the Europa
looks for a nearby anchorage between the icebergs and the glaciers all
around.

The shallow channel where we are heading is like an iceberg graveyard,
trapping drifting ice from glacier calvings and from huge icebergs
breaking apart in smaller pieces. As we drive by, we stop to visit several Weddell seals snoozing on the
lower slopes at either side of the entrance channel. When we start our
way through the narrow channels between the icebergs, Sloopy‘s engine
starts giving some problems and it will only go astern. First towed by
Annukka in the Grey zodiac and then by Jordi in Blackie, we can all keep
going with the cruise.

We get deeper into the several bays and channels, filled up with
beautiful icebergs. Dark basaltic cliffs are on either side as we make
our way through. And suddenly, just turning a corner around rocks and
icebergs, we discover a Leopard seal resting on an ice floe. We all take
our time to stop and enjoy this magnificent animal. Now that we already
have seen all seal species that inhabit these waters, we can tell the
difference between the different species. Leopard seals have a longer
body shape, huge head with the nostrils located on the upper part of
their snout, big mouths and longer flippers. That makes them really
graceful animals, and well armed for predation over penguin, fish and
seal pups, but our guides explained us that approximately 50% of their
diet is Krill, like almost all wildlife in Antarctica.

Overhead we have Antarctic Terns and Kelp Gulls swirling down from the
cliff sides to fish. In the glacier fronts that cover both Despedida and Trinity Islands, we
can see darker ash layers from massive eruptions on Deception Island,
thousands of years ago.

Before turning back and making our way to the Europa, we drift together
for a little break and warm up with a warm treat provided by our galley
crew, Gerda, Gjalt and Sophie. We share a hot chocolate and then carry
on back to where Europa lies at anchor.

After lunch it is time to start the tour for the second group. Sloopy’s
engine has been repaired so we embark the boats and off we go again,
following the steps of the first cruise.
Back on board soon its time to heave anchor sail the 15 miles to the
place where we plan to do a ship cruise in the evening: Cierva Cove, in
Huges Bay.

On our way we set lower and middle staysails and we sail
through a thick fog bank. Suddenly, just before arrival it clears up. In
the bay we found plenty of icebergs, bergy bits and brash ice. Cierva
Cove is framed at its head by the glacial front of the superb Brequet
Glacier, and it’s a place used by Leopard and Weddell seals to fish,
hunt and rest on the ice floes. After 22:00h we resume our way
Southwards to keep with our Antarctic program for tomorrow.