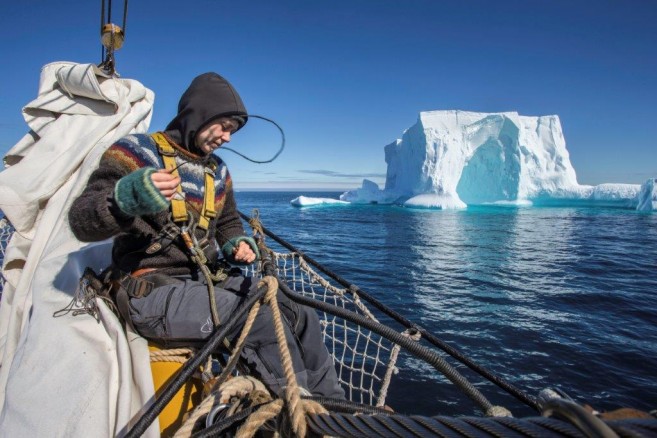 During last night nice W-ly breeze veering slowly to NW-ly let us set all our Staysails plus the Top Sails, and aided by our engines already about 05:00h we sight land, the rugged and glaciated South coast of king George island. As we approach, the distinctive volcanic cinder cone of Deacon peak, that with its 170m in height represents the highest point of Penguin Island, comes to view.

As the morning comes the weather and the visibility  improve, at the same time that the seas flatten.

A solitary Humpback whale welcomed us to the area before the Europa finds her anchorage, and soon afterwards we ready the ship for landing under the sun peeping through the partially cloudy skies. Anchored on the shallow rocky bottom next to the NE corner of Penguin Island we admire the same landscape that was first sighted in January 1820 by a British expedition under Bransfield, and so named by him because penguins occupied the shores of the island. Until nowadays, Chinstrap penguins use the narrow cobble beach South of the landing spot to precariously build their nests close to the breaking waves.

Our first steps ashore after a while building up sea-legs are carefully watched with interest and a hint of mockery by a Weddell seal resting on the snow next to the landingsite.

Before climbing the gentle slopes to the top of the circular volcanic crater that crowns the island, we all walk towards a secondary crater located on its hillside. We just approach enough to the rim of this volcanic depression to have a glimpse at the crater interior covered by a frozen lake and the extraordinary scenery all around.

There is not much vegetation growing in Antarctica, but some regions, like where we are now along the lower areas of the island, represent small oasis where lichens, mosses and both the only native vascular plants, the grass Deschampsia and the pearlworth Cholobanthus, abound.

From there we kept walking, climbing up Deacon peak, to its volcanic crater mountain top. Inside a smaller volcanic cone from a posterior eruptive process can be seen. A volcano inside a larger volcano, a pretty special sight. Great views of its coloured steep slopes, with the background of King George Island mighty glaciers unfold for us during the hike on the edge of the crater. To complete the breathtaking views, Europa lays anchored at the entrance of the Katsui Strait, the narrow boat-passage that separates Penguin Island from the much larger King George. This narrow channel was named in honour of Dr. Y. Katsui co-author (with Gonzalez-Ferran) of the first geological map of the Penguin Island volcano. We also have a geologist on board, and we all thanked the clear explanations our fellow traveller Tito gave about the geology of the island from up the hills on Deacon Peak.

Descending along the easy slopes that lead to the landing beach, we passed by a Chinstrap penguin rookery, leaving a good distance from a rocky outcrop nearby where Giant petrels nest. There the penguins are still busy incubating their two eggs under the attentive look of the skuas.. Following the rocky beach we ran into several Elephant seal youngsters, a few Gentoo and Adelie penguins, and still got some time to stop at the several whalebones scattered along the coast, all before embarking the zodiacs and arriving on board just in time for lunch.

Under the clear skies we prepare the ship for the long sail across the Bransfield Strait towards the Antarctic Sound. It will take us until tomorrow morning at least to reach the Western shores of Joinville Island, where we plan our next landfall. Soon many of us climb the rig or give a hand on deck to set all our sails but the Courses and Lower Staysails. Meanwhile Captain Klaas steers Europa towards an impressive huge iceberg, leaving it right next to our Strarboardside.

When the sailhandling is done, Doctor Bob, acting as our knowledgeable historian, explained us the adventures and misadventures of Nordenskjold, Larsen and the ship Antarctic, arguably the greatest escape of the Antarctic Heroic Age. Amazing piece of Antarctic exploration history, relevant for the areas we plan to visit next. Everyone has heard of Endurance, Shackleton and Amundsen-Scott, but 12 years before the Endurance debacle, the Swedes ‘engineered’ an escape via a series of extraordinary co-incidences involving a ship wreck, a camp established on ice floes, an Argentinian rescue ship, as well as 7 men rowing 100km in a small whaler through the treacherous waters of the Weddell Sea. It concluded, most remarkably, with four groups of men stumbling upon each other, one of which was having lunch on a frozen sea. The whole saga occupied a  three year period in this frozen wasteland.  Using numerous photos and a sequences of maps and diagrams, the story was unraveled by following the fortunes of each party, which at one point occupied seven different locations, until they all discovered each other in two miraculous days, just a few weeks apart. Why has this extraordinary adventure not been more widely told? The reasons are many, but no-one now disputes the expedition’s place in the top league of Antarctic heroism.

Bob timed it perfectly as when he finished, the SW-ly light breeze slowly veered towards the North, while a couple of Humpback whales were spotted close to the ship. Engines were turned off and we all enjoyed one of those magical moments, when both animals felt curious about our Old Lady Europa drifting on their feeding grounds, and approached to investigate us. Swimming and diving from Port to Starboard at the aft of the ship, they spent a good half hour before resuming their activities, waving us farewell with their flukes as diving towards the lowering sun.

As they disappear in the distance, we help bracing and changing all sails to Port tack, setting all the remaining canvas not to start the engines again. It all happens under calm seas, clear skies, gorgeous evening and a typical never ending sunset of those high latitudes. Finally we enjoy the sailing, even though the light breeze just gives us enough pull to keep a couple of knots of speed, on a good 170º towards our destination.

Later on our Mate Fosse spent some time doing some sail training with the ones of us interested. After checking the wind and its changes, voyage crew took away all Staysails, under Fosse’s supervision, and braced accordingly to the increasing breeze. Before midnight Europa sails across the Bransfield Strait at speeds of 5 to 6kn with all Square sails set but the Main Course, Fore Top Mast Staysail and Inner Jib in the head rig, Spanker and Gaff Topsail in the Mizzen.

As we rejoice on the evening and night nice sailing, Humpback whale blows are spotted frequently across the Bransfield Strait. The coastal waters of South Shetland Islands and Antarctic Peninsula are a well-known feeding area for those species. They spend a few summer months here gaining weight before starting their long migration to tropical waters of the South American Pacific coast. Those animals belong to what is known as “G” population, with their breeding grounds along the area comprised between Colombia, Ecuador, Panama and Costa Rica, and their feeding areas located in the Western Antarctic Peninsula.