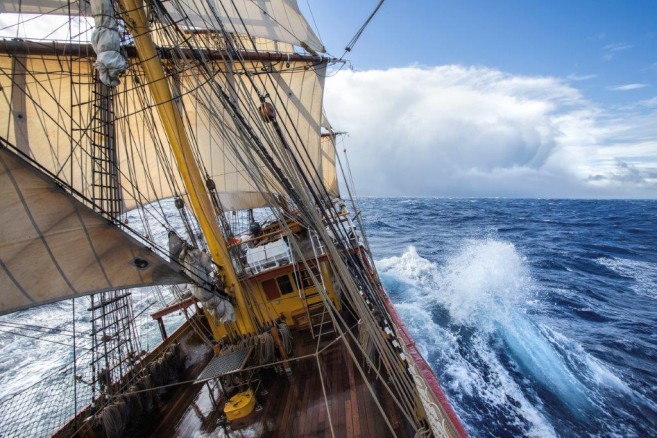 Crossing the Antarctic Convergence Zone on our way to South Georgia.

After the good sailing on relatively good conditions during yesterday, last evening wind and sea state started to become much rougher. So far last night was the most difficult and shaky we had. Europa sails at a good average speed of about 8kn over high seas and strong winds.
The SW-ly winds keep creating big swell growing over the large South Atlantic fetch, that makes us shake and roll. Life on board become challenging, and every movement has to be well thought before being done. On this harsh sailing situation seasickness takes a major role on many of us, reducing the number of participants on the voyage crew watches. Anyway not too many people is needed because the steering is done from the wheelhouse by Klaas, Fosse and Permanent Crew. It becomes to wet and difficult to keep lookouts on the Fore Deck, and during the whole journey people is moved next to the bridge to do this important task safely. For the little sailhandling on deck just the most steady on their feet can give a hand to the permanent Crew, while getting wet as the decks as often washed by waves coming over the side.
At dawn, gradually becoming brighter over overcast skies, we can all see the magnitude of the seas we are riding, and many cameras pop up on deck to photograph or record the impressive hard-core sailing. Seeing what kind swells are hitting us, the movements of the ship turn more foreseeable, while during the rocky night Europa’s motion is unpredictable to a greater extent.
With the coming of the new day, the wind started to slowly  decrease, but still countless small squalls sweep over our path to South Georgia, with their associated showers and forceful winds. Even so, the conditions allow to set more canvas, and the Main Course is clued down and adjusted. A bit later the wind blasts became more scarce and lighter, thus letting us set Fore Top Gallant and during the afternoon the Main one as well.
All this comes with a slight improvement on the weather, and frequently we sail riding the wild seas under clear skies, nevertheless always with menacing clouds growing in the horizon.
It is always surprising how our terrific galley team Marianne and Sasha assisted by Jonna, stand up against those howling winds and raging seas, always working out their magic to keep serving their excellent meals. Cheer up ladies! we are almost half way to our next planned anchorage at South Georgia!
Actually we have covered the good distance of 186nm over the last 24h at an average speed of 7.8kn of first class Southern Ocean rough sailing.
And indeed from now on we can talk on Southern Ocean terms, as during the evening we left behind the South Atlantic, crossing the Antarctic Convergence Zone. Surface water temperature has quickly dropped to about 2 to 3º C in a time span of just a few hours, leaving behind the temperate Sub-Antarctic waters, therefore entering the Antarctic realm.

Thanks for the updates on the voyage! So nice to feel connected when communication with loved ones is non existent. Keep up the great work and fun!