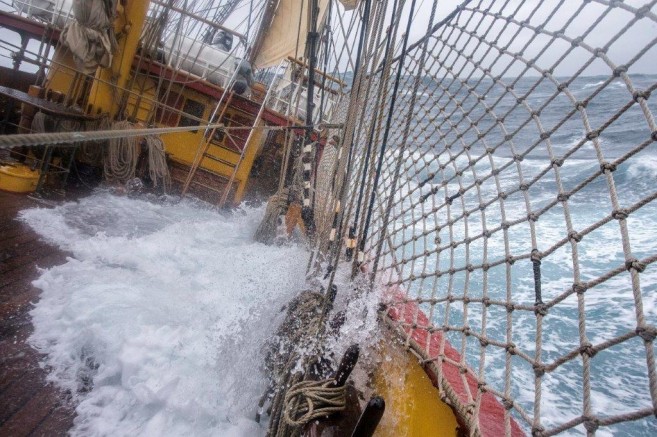 It looks like we finished our activities in Antarctica just in time. After the quiet afternoon at Neko Harbor, with good weather and calm conditions, perfect for Benn and Daina’s engagement, conditions quickly worsen. Soon after heaving anchor, Europa finds herself under 45kn of E-ly winds while crossing the Gerlache Strait on a northerly course. Quite unexpected for all of us, just a couple of hours before, conditions were much calmer. And for captain and mate as well, as they incredulously keep looking at the last wind forecast downloaded, showing 15kn of wind. In fact, for the whole day the raging winds experienced didn’t match at
all with the model of the prediction, indicating different forces and directions. Once in the Schollaert Channel, sheltered from the strong gusts by Brabant Island, the wind decreases and backs to the S, thus inviting us to set some canvas. At the beginning we motorsail under Lower Staysails and Topsails, and keep doing it until early morning, when the Drake welcome us with all its ferocity. Getting into the open waters and leaving behind the maze of little islets called Melchior Islands, the shallow waters combined with the high Drake seas reaching the Antarctic coasts, make a mess of confused swell and waves, having as well the
reflection effect of them on the surrounding islands. Europa starts behaving like a wild horse and she will behave like this for almost all day. Enduring raising winds over 35kn of a NE-ly direction, we enter the oceanic waters of the Drake Passage, turning the engine off and sailing with the canvas previously set on Starboard tack. As the sun rises the wind keeps increasing over the confused seas, now blowing steady N-ly 45kn. Until early morning, when the captain takes care of the steering, as it is becoming increasingly difficult to keep any course from the Poop deck wheel, while blasts over 50kn sweep over us, the ship heavily pitches and rolls, swell crashes against the hull and waves wash our decks. Time to clew up the topsails, start engines again and motorsail under the lower staysails, inner jib and fore topmast staysail, but now changing to port tack. Not much later crew members climb the rig to furl the topsails, now while facing even 55kn of gusting winds. The cold wind roars through the rigging, trying to take grip on our hats, numbing our hands, but in no time sails are stowed away. Then, doing a deck-check, many coils are found off their pins, other ropes have been through the freeing-ports, gaskets had become undone, all under the force and pressure of the large amount of water pouring on board over the low lee-board from time to time, as the thumping seas break on Europa’s hull. After all the wet action tidying up the mess on deck, the heavy conditions seem to stabilize, and Voyage crew can take the steering again, nevertheless the wild conditions and roaring winds will accompany us until the late afternoon, when they quickly die down. Suddenly after diner we found ourselves just in 10 to 12kn of N-ly wind and decreasing seas. Decision is taken to take away and furl all the canvas set by now. Like this, soon we strike Middle and Lower Staysails, Inner Jib, Fore Top Mast Staysail and Spanker, motoring with our both engines straight into the wind. What it seems a situation to last for at least a few hours, soon changes another time and on backing winds, now W-ly of about 20kn, Lower staysails, Spanker and InnerJib are set. We keep a variable speed between 4 to 6 kn with the help of our both engines as well. For now, it looks like we passed the first moment of Drake’s wrath. But with 430nm of its hazardous waters still ahead of us, and its untrustworthy nature, we just can take a short rest, waiting for the new adventures at sea to come.

This brings back so many memories from my own voyage on Europa in January/February 2016, I hope to someday have the chance to return to Antarctica