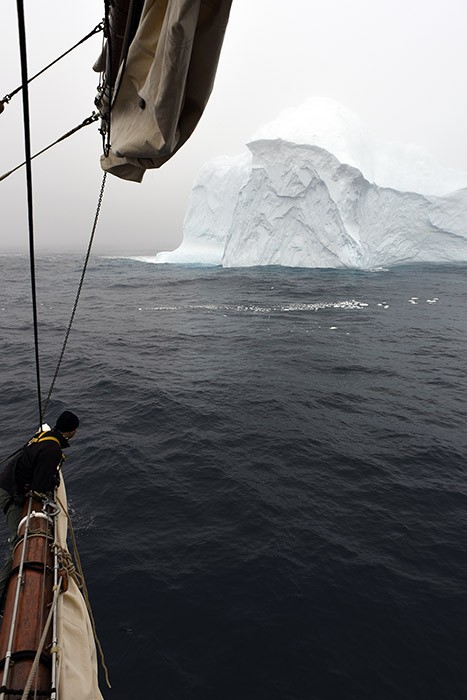 Our evening meeting
also means the end of our sea watches until we will head back into the
Drake. We are now entering a quite unsurveyed area, where depths have
been measured in straight lines with large bits of not charted areas in
between. Eric has been here several times before, but also for him the
sea bottom can have sudden surprises. The voyage crew has steered us
here all the way from the last bit of the Beagle Channel, but now he
takes over the wheel. Even though all the voyage crew is officially off
duty – many help out on deck. We have taken down all the sails and they
all have to be furled. For many it is the first time furling, maybe even
the first time out on the yards. As we are all up in the mast we
suddenly spot the first iceberg. It is huge and close but had been
covered in fog until we were almost next to it. Excited we continue
furling. As soon as all the furling is done a new excitement appears
from the mist; land! The first bit of land after our crossing. Dark
rocks sticking out of the sea, a larger island covered by snow, and a
strange smell we can´t quite place yet. Penguins? On the Northern side,
Desolation Island is completely exposed to the Drake. On the Southern
side, when the weather is calm like today, it is possible to find a
place for the night. The anchor drops. Silence. We can see the closest
rocks, beyond that everything is covered in fog. On a day like this it
is not hard to imagine that Cook managed to circumnavigate Antarctica
without ever seeing it.
Sarah