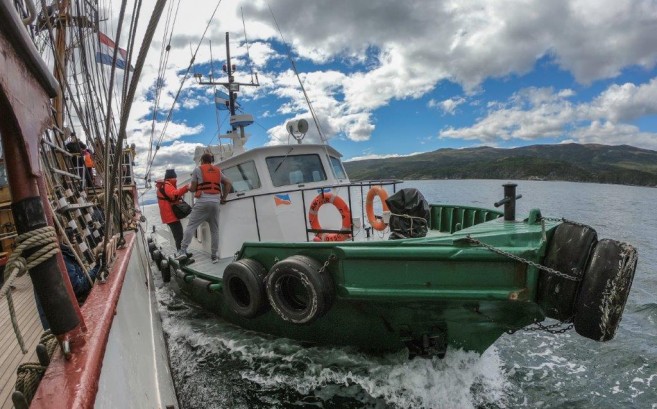 A quiet Christmas night preceded a fantastic day sailing along the Beagle Channel. The activities started while we were still alongside, with the Mate’s safety instructions and abandon ship drill right after breakfast. By the time we were finished with these mandatory briefings, Marcelo, our assigned Argentinean Pilot came on board. He will accompany us for the length of the Beagle Channel, as pilotage is required by the authorities in the inner waters of the Patagonian fjords and channels. With lower topsails already set and the wind blowing from the West at about 20kn, Europa slips her mooring lines and elegantly makes her way out of the harbor. First slightly drifting sideways off the quay, then gaining headway while setting upper topsails and lower staysails. Like this we leave behind Ushuaia under sail, with no need to turn our engines on. At a good speed of about 7kn we sail until about 11:00h, when, as expected on the Beagle Channel, we start experiencing the several wind shifts that usually characterize the area. To keep up a speed between 5 to 6kn and be at the pick-up point of the pilot at the appointed time, we motor sail with the aid of the engines. The long passage through the Beagle channel allows us to familiarize ourselves with the watch system that we all will follow during the navigation to Antarctica. Divided by watches the crew explain us how to fulfill the duties we are supposed to perform during our crossing, like helming, lookout and the first notions about the sails and rope handling. During the day we also got time for climbing instructions, essential if we want to climb the rigging during the trip. Reaching Punta Davison, 20 miles from the Eastern mouth of the Beagle Channel, the pilot is picked up by boat. Afterwards it was time to start our watch system, and besides helping the permanent crew managing ropes and sails, now we also take over lookouts and the wheel. Getting used to it, some straight away, others with more trouble to keep us on course, we start taking turns to steering the ship to Antarctica. Then it was also time to brace sharper and set more canvas, getting enough pull from
our sails to stop our engines and gradually face the open waters of the Drake Passage. After dinner we were already leaving behind Isla Nueva, when the wind eased down. Heading to the open ocean, the courses join the rest of the canvas set. But as the night approaches the wind dies and engines are turned on once more to push us out of the turbulent wind shadow in the lee of the islands south of the Beagle channel. But still in the inner waters of the channel we spotted quite a lot dolphins, which attracted the attention of all with their bow wave riding, fast swimming and performing some acrobatic jumps. Several small groups of Dusky dolphins join us for a while, coming closer and going away afterwards. Later on, some Peale’s dolphins join us as well.

Happy new year and a save journey.

Our son is sailing too. Don’t let the penguins kidnap him 😲

Thank you for sharing this. You let us sailing with the Europa. Nice to hear that wildlife started already in the Beagle channel. Have a nice trip!!