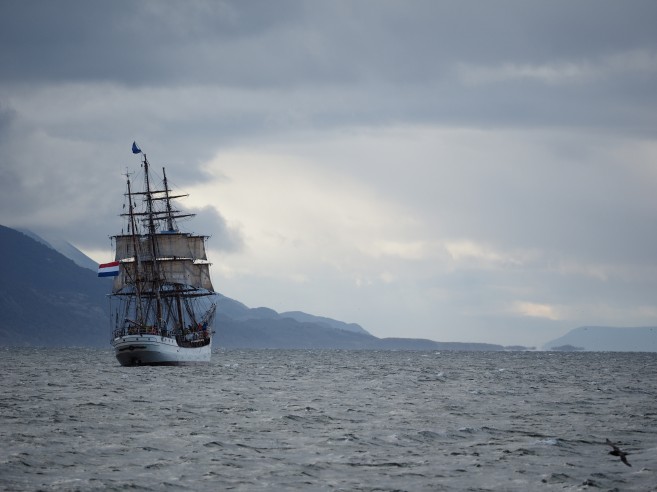 Our trip came to an end in Ushuaia.  It took some time to adjust to the life on dry land - facing challenges such as having a bathroom which was bigger than our entire cabin, uninterrupted sleep, and being able to walk without having to worry about handholds.  We had also become institutionalised, looking a little lost at one o’clock when lunch did not miraculously appear, and struggling with the Argentinean culture of eating late in the evening as opposed to on the dot of seven. The weather in Ushuaia was all too familiar - sunny spells, strong winds, and patches of rain.  It was generally cold and we had to keep reminding ourselves that this was the height of summer.  The views were impressive - when we could see them - despite the attempts of the city to sprawl and develop.
While we rested and recovered, the crew prepared for the next voyage.  The rubbish was being retrieved from the holds and removed from the ship as we retrieved ourselves from our cabins and disembarked. It had all gone when we picked up our luggage later in the day, and instead the decks were full of crates of fresh produce.  These all needed to be checked for bad apples and then hidden in the dungeons of the hold, accompanied by a plaintive cry of “I just loooove stores day!”  It started to rain as we walked away, burdened by our luggage, and we wondered what disruption this would cause to the well oiled routine.

We could look down from our hotel and see the ship on the quayside, dwarfed by a regular procession of Antarctic Cruise Ships.  We tried to organise our itinerary for the next few weeks, but the congestion around Christmas and fully booked buses made it increasingly obvious that the ship would be leaving Ushuaia before we did. There had been a full change of the permanent crew in Montevideo with a couple of exceptions, and many of the previous crew had come down to watch the departure from the dockside.  At Ushuaia the crew would be largely unchanged with only about half a dozen or so differences.  With Christmas looming, some of those departing the ship would have left town for family reasons before the ship set sail again and few would be left to farewell the ship.  Nevertheless, as we awoke on Christmas morning and saw the ship was still present we decided to stop in to see the ship’s departure on our way to the National Park for a several hour walk up a near thousand metre peak (yes, Jordi, we miss you!) for the views which would be impressive - if the clouds permitted. Entering the harbour, the magic word “Europa” was sufficient to satisfy all the formalities of the security without the tedious need to produce any form of identification, and we walked to the ship. The gangplank was still in place, and same pilot who bought the ship in was leaning over the rail, waiting.  Much as he had been waiting at the bunkering station three days ago, as the joys of South American efficiency had frustrated our attempts to dock in time for a shore dinner.  A light but chilling wind was present, with occasional spots of rain - it was blowing down the Beagle Channel, and slightly off the quay. A few signs of activity appeared as the gangplank was raised on board, and a few of the new voyage crew were persuaded to help manhandle it into place.  I smiled - little did they know how much timber and other stuff was going to be stowed inside and alongside it. What they thought was going to be a two minute activity would take them quite a bit longer and give them the first opportunity to roughen their soft hands. A van pulled up, disgorging a number of men with life jackets and other protective gear - these were the people who were qualified to lift the mooring lines off the bollards.  Signs of departure were now imminent.  We noticed that Eric the Environmentalist had unfurled the topsails, implying the ship would be sailing soon and not needing the diesel for which we had waited so patiently three days before.  We were still the only well-wishers, and surprising few of the voyage crew were visible on deck. The front lines were released, and something - wind or bow thruster - nudged the front away from the quay.  Suddenly the stranded remnants of the previous permanent crew were amongst us together with a fellow stragglers from the previous voyage crew, just in time to see the lower topsails set.  This was despite some lines still being attached at the stern, then these lines were also cast off and the ship slowly slipped away from the quay under sail, as the members of the departing crews waved.  All shouts and farewells were drowned out as Eric the Quiet gave an extended blast of the ship’s horn to let all other vessels within a couple of hours of Ushuaia know that Europa was moving. Sarah and Mille ran towards the end of the quay.  After running about fifty metres, a van pulled up next to them and gave the damsels in distress a lift the rest of the way.  The rest of us followed more sedately - the ship was still going well below walking pace so we quickly pulled ahead.  We noticed the upper topsails were being raised and giving the new voyage crew their first opportunity to experience the joys of raising the yards - another opportunity to roughen those soft hands. The ship ghosted down the channel, and passed the end of the quay.  Merel and Sasha had been freed from their duties below decks and were waving furiously.  Mille called out to them “Hope you come back safely” - after all, the ship was to be her ticket out of Ushuaia. As the ship receded, we turned and left the now empty harbour for the last time, closing the chapter in our lives on the Europa.  It had been a good chapter.