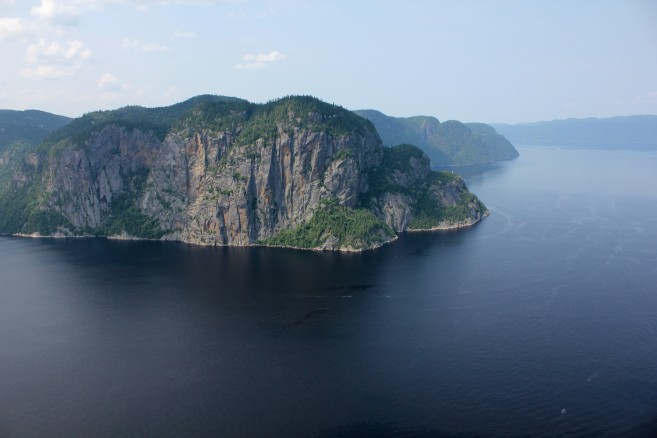 Arrived in Saguenay the Europa moors alongside her sistership the
Oosterschelde. Having a coffee I'm looking at the ship from the sailors
lounge. On the key there is a long row for the open ship this afternoon,
just like in Miramichi where lot of people came to visit the beautiful
old lady. With a lot of questions or stories: you are from the
Netherlands aren't you? How nice I'm me too, living for years in Canada
now. Or, do you know I've been bodyguard of your queen Beatrix when she
was visiting Canada, I was a member of the Mounties.

Sunday in the afternoon we left Miramichi under sail. The new voyage
crew is still "looking the cat out of the tree" (Dutch saying for
looking and waiting what is going to happen). At the end of the
Miramichi river we turn left, heading for Quebec. We pass La Rocher
Percí, a famous Rock with a hole in it and  pass Bonaventure, a bird
island with thousands of birds. Then we go on in the direction of the St
Lawrence river. Not much wind but still under sail, for the moment.

In the late afternoon on Tuesday we are surprised by a thunderstorm with
heavy winds. Damage; one broken wine bottle and the block of the inner
jib. An announcement of changing weather, during the night the wind
turns and increases unfortunately we are gonna have severe headwinds. So
far for sailing, the whole Wednesday we are ploughing against the wind
with big waves, not nice. In the evening the wind takes down but still
ahead, we keep on motering. Up the St Lawrence river seeing dolphins,
beluga's and seals. After lunch we turn to the Saguenay river and enter
the fjord. In the night we anchor in La Baie the Eternité and Friday we
go on to Saguenay. Unfortunately no wind at all but we set all the sails
entering the harbour in La Baie Ha! Ha! In the evening there is a
official welcoming ceremony for captain and crew with presents and music.

I look again, the row of people is getting less, open ship is almost
over and the Europa is "ours" again. It's always so great to see how a
group of 40 strangers during the trip are forming a team. Sail handling,
the watches and the steering day and night are bonding. It turns out
that not everybody were strangers to each other, some have sailed before
on other trips. For over a quarter of the voyage crew this is not their
first voyage on the Europa.