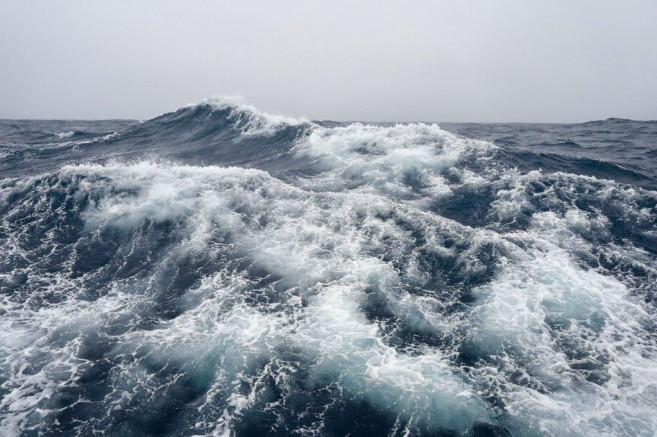 We have been in the same low pressure system since we left the Beagle – and by now we have seen quite a few sides of her. As we left we were still East of her center, and as low presure systems turn clockwise in the Southern hemisphere – we enjoyed Northerly winds. Of course we hoped we could stay on this side of her center and have the fastest crossing to the South Shetlands ever. But that did not happen. The center of the low passed slightly behind us – giving us a period of light wind, fog
and engines on our 2nd day. Close to the center the pressure dropped so low that it almost reached the end of our barograph; with 956 hPa we approached the limits of what our barograph can register. But as the center of the low passed, the pressure slowly started climbing up again. The wind also picked up again– but as we are now to the West of the center, the winds are coming straight from the South, and we are currently heading almost straight East. The wind is forecasted to be decreasing and veering, but so far that is not happening yet. As we are not exactly heading to the South Shetlands, but coming closer and closer
to Elephant Island, the question remains where we will reach land, and if we will continue our voyage into the Weddell Sea or along the Peninsula. The wind will decide …

Meanwhile on board the morale is a lot higher than the air pressure. Ofcourse it is starting to be a bit of a long crossing, and of course the heeling of the ship makes the easiest things a bit difficult at times, but as we get more used to the movement of the ship, we enjoy the truly Antarctic conditions while steering the ship towards the unknown.