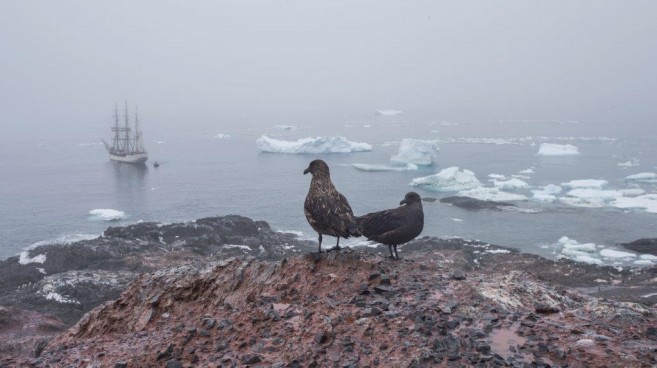 Braving the icy conditions and last night blustery winds, Europa made her way at slow pace towards the West Coast of Joinville Island, where a little shelter from the storm could be found. Slowly the conditions improve, and at daybreak, in dying winds the ship drifts comfortably close to its shores. Joinville, neighbor of D’Urville and Dundee islands, is the largest of the three, and was discovered as soon as 1838 by the French expedition under Captain Jules Dumont d'Urville, who named it for François Ferdinand Phlippe Louis Marie, Prince de Joinville (1818-1900), the third son of the Duc d'Orléans.

The new day welcomes us with light N-ly breeze, still loaded with moist. In such conditions the most frequent outcome is fog and low clouds, like we had during the whole journey.

However, we are close enough to the steep shores of the island to appreciate its desolate icy landscape. In-between the glaciers stand out a rocky cape, leading to a small valley that climbs up the hills. South of it a large bay reveals itself from time to time behind the clouds, surrounded by steep rock walls and glacier fronts, our destination for the morning activity ashore. Named Kinnes Cove and surrounded by Madder Cliffs, it is a spectacular spot to visit during an Antarctic trip that wants to venture into the Weddell Sea, described by Thomas R. Henry in 1950 as the most treacherous and dismal region on earth, as we start to notice during those last days of Antarctic adventures.

The Captain finds a spot where to drop anchor and soon we are ready to land. From the ship, the swell crashing against the shoreline suggest a daring landfall. And indeed it was, with the boats tugged in a narrow channel dealing with the swell, we landed straight on the rocky coast.

Many Gentoo penguins were still hanging around the area, while the numerous Adelies that live here already left for their winter quarters at sea and on the icebergs.

Before the hiking group starts a morning leg stroll up the hills, we all can have a good look at a few snoozing Crabeater seals, laying on the ice floes that had been pushed against the coast by wind and waves. The people who preferred to stay around the lower slopes could even have a bit closer look. Then, the walk goes over a steep start, but soon the terrain becomes easier ascending an open valley that leads to Joinville Island ice cap, as the whole island is almost completely glaciated. From there a short scramble over loose pebble slopes brought us to the top of the 305m high cliffs, rising vertically from the sea and forming the northern entrance of Kinnes Cove. There, we can imagine that the views are magnificent, but today it is just from time to time that we can have a glimpse at the surroundings and to the crashing waves far down below. From up there it is clear also that the swell seems to be increasing, time to start our way back to the shoreline and the ship. Zodiacs are called and faultlessly everybody make their way safely on board. Lunch soon is served while still at anchor, afterwards resuming our way, now to get deeper south into the Antarctic Sound.

Fair breeze from our back made for a good sailing opportunity. We braced square and set Top sails, just to pack them back again a few minutes later when the wind completely turn around and started blowing on our face. Many give a hand furling the frozen sails that still are hanging on their gear.

Others attend Mate’s talk on the creatures to be found inhabiting the oceanic depths of Antarctica. The descriptive lecture was based on introducing the most common groups of marine invertebrates and its main characteristics in southern Patagonia and Antarctica. Underwater pictures were shown, together with environmental and evolutionary traits of these high latitude ecosystems. In the meantime the low visibility does not allow for much speed, and slowly Europa keeps motoring southbound on relatively open waters. The stormy winds from last night have been moving the drifting ice, leaving much of the Antarctic sound free. But as we soon realize, it has been packing it southwards to the entrance of the Weddell sea. As winter takes its grip on it, the Weddell Sea will lay blocked, until the next summer will start breaking once more the impenetrable wall if ice that is growing at this moment.