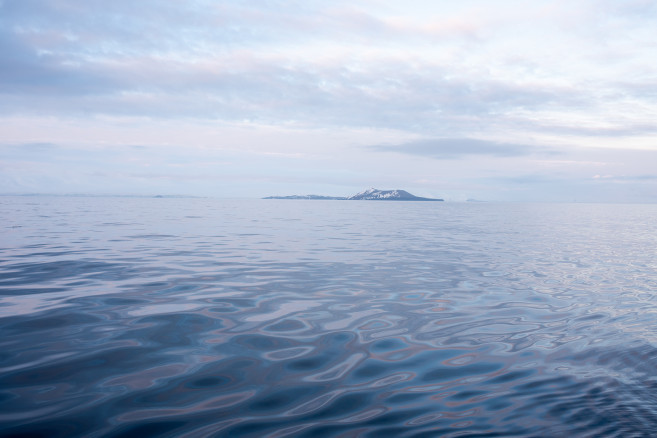 After a good crossing of the Bransfield Strait, Europa woke up at the West Coast of Joinville Island. Wind had eased down but now low snowy clods keep passing by, challenging the visibility. Nevertheless now and then the mainland of Antarctica comes in view beige us, and Joinville (the largest of the island group that also includes D’Urville and Dundee) reveals its cliffs and glaciers near the drifting ship. The goal for the morning outing was to set foot and climb up the hills of Madder Cliffs, rocky walls that surround Kinnes Cove at Joinville, the seldom visited island where soon we send the zodiacs to disembark all of us. It was discovered as soon as 1838 by the French expedition under Captain Jules Dumont d'Urville, who named it for François Ferdinand Phlippe Louis Marie, Prince de Joinville (1818-1900), the third son of the Duc d'Orléans.

In-between its glaciers stand out a rocky cape, leading to a small valley that climbs up the hills. At its foot a narrow channel amongst the shore rocks offers a suitable boat tucking area to land.

A great deal of Gentoo penguins were still hanging around, while many of the numerous Adelies that live here have already left for their winter quarters at sea and on the icebergs.

Mostly young and almost fledged Gentoos carpet the lower slopes of the mountains landscape, always curious to examine and welcome new visitors to their home. Once they had us checked, they resume their favourite activity for the day, play and train for swimming in the intertidal pools amongst the rocks. Soon they all will leave the rookeries for real and will have to deal with the open waters around the Antarctic continent as it gets colder and the sea surface freeze.

Once on land, everybody was up to a bit of a leg stroll to a vantage point over the bay and Joinville Island ice cap, as the whole island is almost completely glaciated.

Then a hiking group climbed higher to the top of the 305m high cliffs, rising vertically from the sea and forming the northern entrance of Kinnes Cove, while the others preferred an easier morning, spending longer over the lower slopes and the coastal area. After having sporadic glimpses to the islets, icebergs and crashing waves down below amidst the fog, it was time to start descending to the landing zone to be picked up and return to the ship for a well deserved good meal.

A couple of hours steering across the practically ice free Antarctic Sound brought us to the high orange cliffs of Brown Bluff. The spectacular volcanic crags fall off a 3.2 km long ridge of basalts and lavas with a flat low area at their foot, located at the mainland Antarctic Peninsula northern tip. There, Adelie and Gentoo penguins thrive.

Since about a month ago, when they are still breeding, the area is home for hundreds of Gentoo penguins and a large rookery of Adelie, counting several thousands. Quite a lot of them are still moulting here, mostly looking for shelter behind rocks, others are ready to start their winter journey into the icy waters and icebergs.

Being the remnant what is called an “englacial volcano” the area shows remarkable geological structures. The volcano actually erupted mainly underneath an ice cap, and belong to the so called James Ross Island Volcanic Group, ranging in age from the Miocene to present. Its original diameter is thought to have been about 12-15 kilometers, and probably formed by a single event.

It is often not the easiest lace to land due to the amount of brash ice accumulated along the beach and the numerous shallows and submerged rocks around. But one everybody set foot on land, there was time to enjoy the wildlife packed beach, crowded with Gentoo penguins, some of them still feeding their fully fledge chicks, Adelies moulting at their favourite corners of the coast and lots of Fur seals having an easy time. Amongst them a solitary Weddell Seal sleeps, surely recovering from its deep foraging dives. Skuas have a close look at the rookeries always in search of weaklings to hunt.

Two options were offered from the beach, spend a bit more time along the low flats and then make the way following the coast to the spectacular glacier that dominates the southern part of the area, or join an adventurous hike. The latter took the group to the base of the bluff, where it meets the glacier, and climbed along its old lateral moraines.

Following them, the group first stopped to have a look at another geological feature related with the eruptions under the pressure of the water and ice, a cross section of the so called “pillow lavas”. Looking down the bluff, the extensive glacier responsible for the glaciological geomorphology of the zone, and where we set foot after a steep descend. Walking on the ice down to the beach, its majestic calving front marked the return point to the landingsite where zodiacs picked all of us back on board.

Time for starting our way off the Antarctic Sound to get into the Weddell Sea, through the Fridjtof Sound. 6nm leaving he Antarctic Peninsula at our Starboardside and Andersson and Jonassen Islands at our Port. Both named after crew members of the 1901-04 Swedish Antarctic Expedition, which wanderings on those waters we plan to follow during the next couple of days.

Go on an adventure follow Jordi～ One who crosses the horizon. There's a library in the brain~