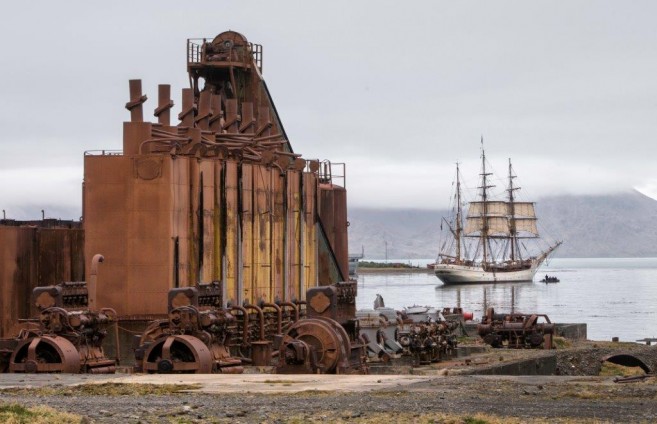 Europa hold her ground overnight at Husvik, and by the early morning started motoring to the small bay of Maiviken, located at the headland that splits in two the wide Cumberland Bay. Surrounded by the spectacular coastline of rocky cliffs and steep scree slopes, Maiviken offers relative little cover from the open sea conditions, but so far, being pocketed in-between the steep mountains it still was a bit sheltered from swell and strong winds.

Three small rocky coves can be found between the capes (Rocky and Mai points) limiting Maiviken. On its Northwest corner first we pass by Tortula Cove, then we leave behind Burnet inlet and the third one is where we plan our landing, Poa Cove. There, 5 Royal Navy conscripts and 2 more persons, one from the scientific base King Edward and the other from Grytviken Post office and Heritage Trust are already waiting for us, after walking in the early morning from Grytviken and happy to have a few hours off to have the chance for embarking the Europa and sail her to the neighboring Grytviken, located on Cumberland East bay.

As an exceptional case, a British War-ship is alongside King Edward Point in Grytviken and some of the crew have time-off to join our ship.

For us, it will be an easy gentle hike over lovely mountainous terrain from here to the whaling station. There we expect to re-join the ship. While we all go ashore at Poa Cove, they are welcomed on board and straight away enthusiastically start pulling ropes, hoisting zodiacs and setting some sail, enjoying climbing aloft to unfurl and take some pictures. They are now the new Europa invited-crew for a couple of hours.

Nowadays Maiviken is often visited by scientist from King Edward Point for research purposes, mostly surveying Fur seal population and Gentoo penguins nesting at Tortula Cove. But the cove have a much longer historical background. It was a preferred place on the early sealing times of the 1800s. As a testimony of their activities, right on the landingsite a cave where they used to stay while hunting and skinning seals can be visited. A quite precarious shelter in the past, but in present times a wooden door has been added to improve the accommodation.

From there a short tussock grass crossing, terrain that is becoming the favorite for some of us while is the nightmare for others, the path to Grytviken starts. It leads towards the Station through grassy slopes, the so-called Maivatn lake, the Bore Valley and climbs up to a 205m high mountain saddle. On the way it visits a small hut built in 1974 and kept in good conditions until nowadays. Descending from the hills and leaving behind the well-known Dead man’s cairn, we pass by a small hydro-electrical structure. Grytviken can’t be seen until almost reaching the sea level, as it lays hidden on a bay just around the corner of the valley we use to climb down. There, we are welcomed by the views from the Whaling Station’s remains, with the Europa just arriving with her Top Sails still hoisted. It is not yet allowed to walk around the area until the officers clear the ship and the compulsory paperwork is finished. For this, we embark straight away, and all bureaucracy is done while we all have lunch. Also Sarah was brought on board, she is in charge of the Museum and head of the South Georgia Heritage Trust, to give an interesting talk about the successful Habitat Restoration Projects they have been undertaking for the last few years.

Following her lecture it was time to land amongst the impressive remains of Grytviken, giving us a close idea about the large scale whaling operation conducted at South Georgia during several decades.

And here we come across once more to an important character when talking about Polar exploration, pioneering and entrepreneur capabilities, Captain Carl Anton Larsen.

He made important contributions to the exploration of Antarctica, amongst them and of the utmost importance for the fate of South Georgia, he commanded the ship “Antarctic” for the Swedish Antarctic Expedition (1901-03) leaded by Nordenksjold.  It was during this expedition and their stay in the island that he recognised the commercial opportunity of whaling in the waters off South Georgia.

Being castaway in Antarctica for about a year, together with the crew of the lost in the icy waters of the Weddell Sea “Antarctic”, they were rescuedby the Argentinean vessel Uruguay. Without losing much time, the tireless Larsen found financial support in Buenos Aires from “Compañia Argentina de Pesca” to establish a whaling station at Grytviken. The commercial success of the first season (1904-05) caused Norwegian and British companies to further establish whaling stations in the Southern Ocean Islands.

Sure he was thrilled to organize and supervise the construction of Grytviken, the first land-based whaling station in Antarctica. With this, a new era of modern whaling and further ecosystem changes began after the decimation of the seal populations.

So much, than within a few years the Antarctic was producing about 70% of the world's oil.

Proud of his accomplishments, Larsen lived in Grytviken together with his family including his wife, three daughters and two sons. During this time, he gave support to several Antarctic expeditions stopping at South Georgia before venturing into the icy realms of the White Continent. Between them, he is also known for mediating to the issues aroused during the polemic German Expedition of 1911 under Wilhelm Filchner on board the Deutschland. At First welcoming to the island a crew that already showed internal personal problems, that just grew bigger when they left for Antarctica, and afterwards when they got trapped in the ice. The ship broke free from her icy grip on November 26, 1912 and they sailed back to South Georgia with threats of mutiny on board. Larsen then arranged for the mutinous crew to return to Buenos Aires and Filchner’s return to Germany. Despite all the tribulations, the expedition achieved great success on the fields of new lands discovery, cartography and oceanography.

Larsen pioneered the pelagic whaling as well, that started on 1920s, when the British government forced the whaling stations to process the entire whale for oil. Not complying to these new rules was punished with withdrawal of their licenses. That forced the Norwegian companies to find another solution to maintain their business. The answer was to refit the land stations or try offshore whaling on factory ships.

Our time ashore on such renowned place as Grytviken, started with a visit to the cemetery, where Ernest Shackleton’s grave and Frank Wild’s ashes are to be found amongst many other graves of whalers, sailors and an Argentinean casualty of the Falkland conflict in 1982.

Instead of having his burial place back in England, Shackleton rests here at Grytviken. The story goes as follows: He never achieved the challenge of crossing by foot the Antarctic Continent via the South Pole during his Imperial Transantarctic Expedition (1914-1917). But even after this failure and having endured one of the greatest survival feats on Polar Exploration, when the ship “Endurance” was crashed by the Weddell Sea pack ice, he wanted to return to Antarctica.

A few years later he could come back on board the Quest, doing a stopover at Grytviken on January 4, 1922. Next morning sad news were to be faced by the crew on board and the entire world, Shackleton had died of a heart attack. His body was brought to Montevideo, from where his wife could be informed, but instead of claiming the remains, she decided to have him buried at Grytviken. Where he lays since March 5, 1922. The ashes of his right-hand man, Frank Wild, were placed in the graveyard just recently, after they had been found in Johannesburg. Unfortunately, he had died as quite an anonymous person on August 19, 1939.

Following a visitor’s tradition, we all had a few words and a shot of whiskey, including Shackleton and Wild themselves. From there, Charlotte, a local guide from the Heritage Trust, met the ones of us interested on receiving some additional information about the Station and the activities performed here in the past, to tour along the derelict facilities. The apparent disarray of Historical shipwrecks, warehouses, boilers, oil tanks, chimneys, generators, flensing plant and such, all end up fitting on a logical succession as we walk around and listen to the explanations.

The informative visit ended up at the Souvenir shop, Post office and Museum.

The latter is home for different exhibitions, from Shackleton’s life and expeditions to all aspects of whaling, Falklands War and the island’s Natural History. Inside the neighbor building we are surprised by the small size and precarious looks of the “James Caird” replica, the open boat used by Captain Worsley, Shackleton and four of their men to sail all the way from Elephant Island to South Georgia.

Soon is time to board the zodiacs and come back on board, as the Captain’s intentions are to heave anchor straight away and make our way to a sheltered anchorage from the forecasted storm that is menacing South Georgia for the next day. For that purpose, Europa motors 10nm towards Cumberland West Bay, where she drops both her anchors at Jason Harbour, a new place for all of us, including the ship and the Captain, but seemingly protected from the anticipated strong N-ly winds for tonight.