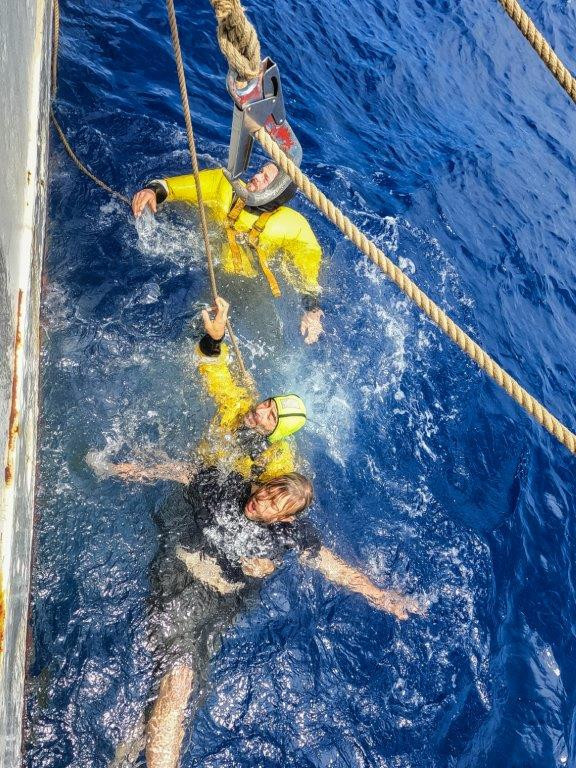 The nice sunrise announced what was going to be a gorgeous morning weather. While the day starts, Europa rolls over a crossed swell on a downwind SW course, pulled at 3.8 to 5kn by 12 to 14kn of fair breeze. An appropriate speed for trying yet another Manta trawl in the micro plastics research project hosted on board.
With just about 570nm left until arrival to Montevideo, and an expected weather change coming soon, sure our scientists are excited to do their lasts sample collections whenever it is still possible.

Sailing at 270nm from the coastline, the morning trawl proved to be a good example of the amount of plastic pollution drifting along the Brazilian shores, which we have been following southbound for already a few days.
We have left the tropics and has entered a much colder climate with at times strong wind and heavy rain. We are at Lat. 30'57.766 S and Long. 46'10.331W just at the end of the Brazilian current that marks the western boundary of the South Atlantic gyre.

The trawls done here has been full of microplastic particles much more than we have seen elsewhere in the Atlantic Ocean. Including the presence of several ‘Mermaid’s tears’, precursors of the fabrication of different plastics, and loaded with chemicals and pollutants. As floating small particles, they are used by phyto and zooplankton alike as an attachment surface in their drifting. Once cleaned of them during the processing of the samples, they look like white spheres.

The presence of an increasing amount of plastics on those waters, could be that the Brazilian current transports plastic pollution all the way along the Brazilian coastline towards the South Atlantic Gyre and we are trawling at the end of the current before it meets the fresher subantarctic water of the Falkland current. The distribution and accumulation of ocean plastics is strongly influenced by currents and wind patterns.

When the scientific equipment, nets and towing lines are stowed away, the stable and good weather conditions allowed again for serving the lunch buffet on the main deck. Good opportunity and timing for all of us to have a look at the ship passing by at our starboard-side while having our meal. The well known in the Southern Ocean British Navy-Survey-Science-Supply vessel and Fisheries patrol HMS Protector overtook the Europa on her way South to Falkland and South Georgia waters. Sure we will meet her again during the next months when Europa will venture into the Sub-Antarctic and Antarctic waters.

Lunch put away, coffee served and by the time of changing watch in the afternoon, a continuous ring of our alarm bell signaled a Man Over Board exercise. Part of the mandatory monthly drills, it always adds a bit of excitement on the sailing days, with the crew performing their various tasks and supervising-directing the doings of the voyage crew, also involved in the activity.

With a sharp lookout posted up the Mizzen mast and others helping pointing the victim from deck, all square sails must be clewed up, buntlines well pulled and their yards lowered, all in a quick action. The three Studding Sails flying at the port-side of the Fore Mast are the first ones to come down. In a few moments they pile up in the fore deck, … there will be time later to take care of the mess, now the important thing is to get the ship closer to the victim in the form of an orange fender, that lies somewhere there out at sea.

Captain, Mate and Bosun shout their instructions, followed by all hands on deck, while the engines are switched on and Europa manoeuvre to get close to it. Two permanent crew members suit up and are ready to swim to the rescue, waiting by the port-side maindeck gate for Captain’s commands. When the supposedly casualty is close enough, one swimmer jumps in the ocean and get it, being towed on board afterwards. When alongside, the drill continues, now practicing hoisting the victim on deck. Once on board, Doctor and assistant are ready to take care of the situation.

A successful exercise that finished with the chance for everyone for taking a swim before setting canvas again and resume our way. Turning around under sail to catch again the following wind, soon many hands could be seen on deck pulling halyards and sheets, now that everybody is awake after the drill and the refreshing swim.

All square sails are set, braces pulled tight and all canvas trimmed to continue our way. With a NE-ly wind increasing, clouds starting to cover the sky, yards are pulled a point to Port tack and checking the forecast and the current state of the weather, is decided to de-rigg all the Studding Sails gear and put it away until their next time to show up comes, probably in months to come. The strong winds and famous dreadful whether and sea conditions of the Southern Ocean and Antarctic waters don’t make for their use. Skysail Masts, Yards and sails will follow their fate soon and will remain stowed away until their next chance to show themselves at the very top of the Europa.
Halyard and Sheet lines come off and are coiled down, their blocks untied from aloft and piled on the working bench waiting to be labeled and packed.

But still, luckily enough during the night, the gradually rising winds allowed for a successful plankton trawl. As soon as the net is in the water it starts sparkling as it disturbs the bioluminescent phytoplankton and makes it shine. Then, under close examination under microscope and photo camera, it reveals its glowing nature in the confined environment of the petri dishes, offering singular views and good chances for scientific and more creative pictures alike.


Science and art sometimes can touch one another, like two pieces of the jigsaw puzzle which is our human life, and that contact may be made across the borderline between the two respective domains.  M. C. Escher