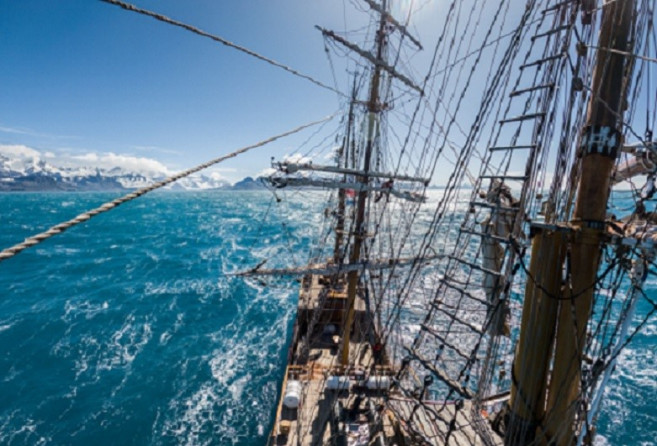 Moltke Harbour in Royal Bay and departure from South Georgia.

After our successful visit to St. Andrews Bay, our captain wanted to provide us with one last night at anchor, and Moltke Harbour in Royal Bay was the best option available for this. We had breakfast in brilliant weather, and the views of Pimer Peak set the scene for our last morning in South Georgian waters. And since the swell on the beach turned out to be quite manageable, our guides and zodiac drivers quickly prepared for yet another landing. For once, the fur seal situation was quite relaxed, and soon we wandered amongst curious elephant seal youngsters and some Gentoo and King penguins that called Moltke Harbour their home.

The area had been named after the first steamship to reach South Georgia, the German warship “Moltke” which was the expedition support vessel of the German 1882-83 International Polar Year campaign. The remains of this research station are barely visible today, and are located more towards the east of our landing beach. But it was an interesting reminder of the fact that scientific exploration at these times did not have most of the amenities of modern research facilities or fast lines of communications. As an example, the Germans in Moltke Harbour had set up some seismometers during their stay, and their recordings showed some seismic activity which only later – and presumably through scientific correspondence in the form of written letters – were clarified to be related to the outbreak of Mount Krakatoa.

South Georgia. An austere jagged shoreline; behind, the high mountains chiseled by glaciers; the remoteness of the unforbidding Southern Ocean. Over 170km of its Southwest coast exposed to the weather systems and monstrous swells travelling clockwise around the southern high latitudes, unobstructed by large land masses. Under those conditions it is the Northeast coast with its numerous embayments that would look like the sheltered side of the island, but here the word shelter must be used with care. Variable winds often blow from a northerly direction straight into the supposed protection of the bays; with strong northeasterlies forget any good chances for landing. Often the winds funnel through the large valleys that cut across the island; again and again a seemingly sheltered anchorage is hit by the blazing mad blows shooting straight down the glaciers, the infamous katabatibc winds.

A Captains gut feeling, a rolling cloud over the highly glaciated peaks of the southern part of the island, a gusting wind.

In the wind meter, dancing numbers in a crescendo concert and a shifting needle.

A radio communication calling for shortening the morning landing and re-embark soon.

Indeed, katabatibc winds start shooting off the glaciers to the sea with raging force of over 45kn.

Just about in time before the strangest blows, the last zodiac is lifted on deck. Anchor drags making for a swift operation of heaving and keeping the boat in a safe position.

We counted ourselves lucky to have had this last night and morning in relative comfort of this bay – the quote “shelter is a very relative thing in South Georgia” really proved valid once again.

Time now to use on preparations for setting off towards the ocean. The Scotia Sea lays now between us and the Antarctic Peninsula. A rough 1000nm stretch of cold waters, fierce winds and foul weather.

Safety lines and nets tied up, just one of our rubber boats left on deck, the other one packed away.

One of our deckhands also kept working away on the main deck together with our ship’s doctor, to finish work on some sail repairs on the fore topgallant with the help of “Freja”, our powerful and massive sailmaker’s sewing machine!And of course, once these last panels were stitched up, both the sail and “Freja” had to be brought inside, demanding many hands and some skilful hallway manoeuvres as well.

Decks are also readied and down below all sea fastened.

Then the Europa turns around with the strong winds and starts setting the canvas that has been stowed away during her visit to South Georgia.

First Lower Topsails power our way to the open sea, where the coastal wind force decrease. Uppers and Top Gallants are clewed down then together with lower staysails. It was not until the night when the ship caught the offshore winds and could adjust her rig for a good sailing. Top Gallants come down and are furled, expecting a sudden increase of wind later on. Instead, a gradual rise in its force makes for setting the Courses, bracing sharp on Starboard tack and start our way, leaving the island behind. Several Humpback whales blow close to the ship while the sunset lights the island’s mountains. A great farewell to South Georgia and a welcome to one of the roughest seas in the world.