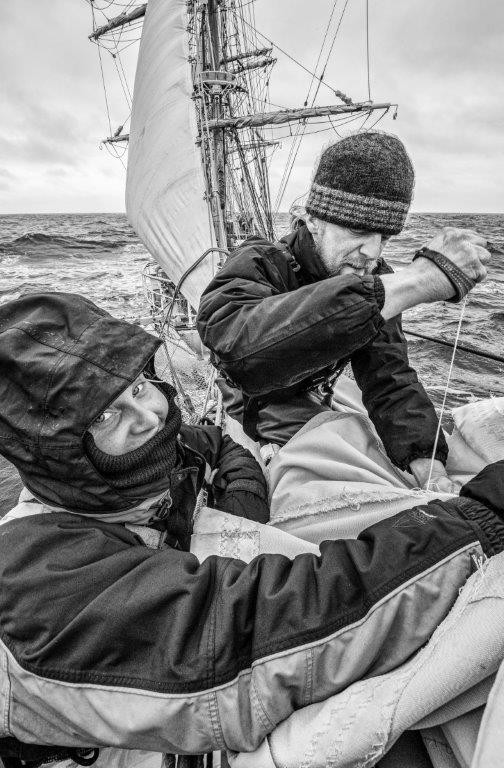 After the last days of sailing close-hauled without much sailhandling involved, today we woke up to a busy morning, that extended into a lively evening too.
Before breakfast the wind seemed to be veering slightly to the NW, still blowing at 25 to 30kn, giving us good hopes for sailing Southwards again, gaining some terrain in the direction of South Orkney Islands. For this we needed to tack the ship, a swift manoeuvre, but it was just shadowed by another wind shift, now backing once more to the west, even while performing it. That means the end of it. We give up, running out of time. All square sails are clewd up and furled straight away and with the help of our engines and staysails we try to make some way towards our destination. While striking the inner jib, the crew realised that a small section of seam ripped open and must be re-stitched before setting it again. Not long after, realising that the wind was not coming back again to a proper sailing direction for our purposes, it was time to change tack once more. Now an easier operation as it was just a few staysails and the spanker to pass to the other side, and yards to be braced where their sails were stowed away. Again on port tack and with the help of both our engines we push our way through the seas, now pitching facing swell on slightly decreasing winds. The sleet and snowy weather from last night gradually became better during the morning, helping the work on deck and cheering up some spirits with some early exercise, pulling braces, sheets and halyards. And, as is becoming the common workout this morning, by coffee time another wind shift makes us change tack another time, now to stay on starboard tack for longer, waiting for the forecasted NW-ly wind and
steering in the meantime on a good SW course. The wind shift came later in the evening, together with a rise on the sea state. After dinner it was time to unfurl and set top sails, adding them to the configuration we are carrying: spanker, lower and middle staysails, fore topmast staysail and inner jib. As the crew was aloft the blows became stronger, with gusts of about 40kn in the grey, cloudy
and rainy weather. Once those square sails are set it was time once more to pull some ropes on deck, taking away the middle staysails on a pitching ship as she also heels to port side.
Europa motor sails her way, now on a good SW-ly course and 6 to 7kn of speed, putting up with high seas, rain and winds up to 45kn. The total distance covered in the last 24h (taken after diner time, as usual) has been 120nm, but after changing tack and course several times during the last days, we find ourselves just about 48nm to the West of yesterday’s position at 20:00h. But that also means 48nm closer to our goal at South Orkneys and 48nm closer to the Antarctic Peninsula. Taking all in account, now is just 150nm between us and the northern tip of the islands, which are actually on the direct track to the area in Antarctica that we plan to visit. If we keep our good progress and course probably tomorrow we will be able to see the South Orkneys, and then it will be time to assess the wind and sea condition to try a landfall or keep on our way.