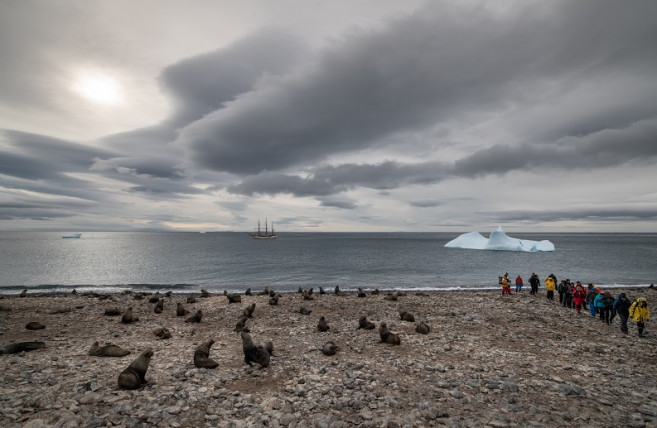 In the early morning, two shackles of the anchor rattle their way down into the 10m depths of Paulet Island’s coastal waters. The scenic volcano, spectacular today under a sky adorned with lenticular and high clouds, date its birth to the Miocene geological period, just like the other similar volcanoes in the area. Nevertheless its latest eruption occurred just as recently as 1850, not many years after its discovery by James Clark Ross on his 1839-43 voyage, who named it honouring Captain George Paulet of the Royal Navy.

Despite being barely 1.5km in diameter is home for a large array of wildlife, including an Adelie penguin rookery that counts approximately 100.000 couples. A bountiful island that during the winter of 1903 sure saved the lives of the Swedish Expedition crew, after their ship the “Antarctic” sunk in the heavy pack ice 25 miles east of the island on 12 February 1903. They could reach Paulet savaging whatever they could from the shipwreck, and there, under the command of the legendary Captain Carl Anton Larsen (well known both in Antarctica and the Arctic alike) the marooned party built the sturdy stone hut that we could visit this morning. Insulated with penguin guano and mud, sail cloth and seal skins, its ruined stone walls still stand. The living quarters were divided in a sleeping room 7.3. x 6.7m; 2.4m high in the centre and 1.2m at the sides; and a sort of a smaller kitchen 3 x 3.7m.

Today, it was not the easiest job to get there from the swell swept landing site, walking our way along a Fur seal crowded beach and at the edge of a melt water lake. Next to it lies the grave of the only casualty of the Swedish Expedition, deceased during the over-wintering. He was Ole Wennersgard, aged 22. Not far, a basalt stack stands, and at its background, a gentle slope climbing inland, both home for Antarctic shags and Snowy sheathbill nests. Keep on going with the morning excursion, wecame across another inland crater-lake, and edging it we finally ascended to a saddle between hills, privileged scenic viewpoint to both sides of the island. Down below, countless Fur seals welcomed us back to the beach with their growls. Amongst them, more quiet and less belligerent a few Weddell seals and Elephant seals snooze.After yet another exciting and wet zodiac ride, we board the ship in time for a well deserved lunch, while Europa heaves anchor ready to start her way off the Weddell Sea. About 170nm lay ahead of her before reaching Elephant Island, our next destination.

Engines are turned on again and under headwinds she makes her way northwards along the Antarctic Sound, first under cloudy and grey skies that came clearer in the evening. Before hitting the open waters of the Bransfield Strait, she came across some spectacular icebergs, a couple of them crowned by resting penguins.Like that we leave behind the steps of Otto Nordenksjold expedition at the starting of the 20th Century, and with itthe Weddell Sea, described by Thomas R. Henry in 1950 as the most treacherous and dismal region on earth. For us an unforgettable experience, spiced with its characteristic wildlife, hikes and changeable and winds, weather, and ice conditions.

thank you Jordi for all the beautiful blogs.