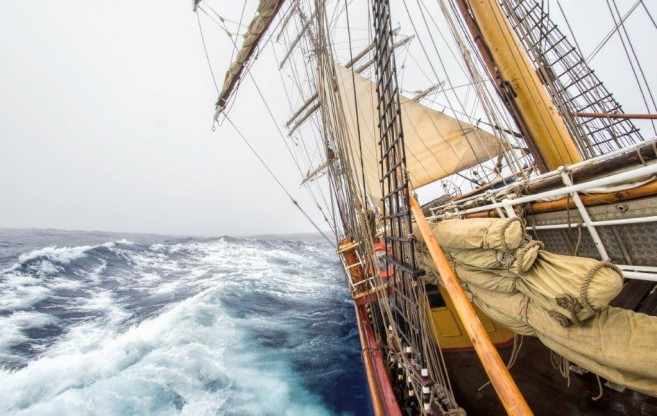 Steady 20kn of NNW winds have been the trend of the morning, after a few hours of high seas and strong winds during the night. Under these conditions, Europa motorsails with the Inner jib, Dekzwabber and Aap set, until suddenly the seas calm and wind drops in the afternoon while backing to become W-ly. We spend the rest of the day motoring close to this wind, gaining some terrain to the west. Sails are packed not to be set again until the late night, when we experience a forecasted wind increase and direction change, veering to become again NW-ly blowing at 30kn.
On our struggles to gain terrain towards the southernmost tip of the Americas, practically against the wind and riding the swell across one of the most feared seas in the world, the Europa leaves behind the latitudes over 60ºS, known by the dramatic name of “screaming sixties”, motoring into the “furious fifties”. This latitude crossing means that now we find ourselves officially off the Antarctic Treaty Area, but not just this, close examination of the surface water temperature evolution during the last days also indicates that we have left behind the cold Antarctic waters and now we sail sub-Antarctic temperate areas. It was during the highly controversial Filchner expedition of 1911 that this important oceanographic and biological boundary was first brought to light.
After a stopover at South Georgia, they departed towards the virtually unknown Weddell Sea on their ship “Deutschland”, with scientific purposes and ambitious exploratory plans. There they reached further south than anybody before, finding land far south in the Weddell Sea and an associated ice shelf, along the way making unique observations of geography, geomagnetism and oceanography. Despite soon becoming ill-fated due to personal problems amongst the crew, character clashes, leadership disputes between the Captain, Filchner and the scientific team, the general low morale after a forced overwintering, which in the end led to a mutiny, the expedition was utterly scientifically successful. Their biggest contribution besides the discovery of new Antarctic lands, was in the field of Oceanography, rising Antarctica as major player in the large scale oceanic circulation. Crossing the high latitudes as approaching the southern continent, the oceanographer Brennecke noted a sudden drop in the salinity of surface waters flowing north, and an associated steep temperature plunge on the surface waters, as they sailed south. Amongst many other achievements and findings, he just had discovered the Antarctic Convergence, probably the most consistent boundary for defining the start of the Antarctic region with its cold and icy waters to the South. Further information about some oceanography aspects of the waters around Antarctica and its implications on the world’s oceans, was given by Arnoud in a lecture. There he talked about how the Oceans flow and play an important role in the distribution of heat over the globe. The so-called thermohaline circulation acts as a conveyor belt that brings warm water from the surface in the tropics to the poles, where it cools down and sinks off to larger depths. The cold water from the depths is then transported back to the surface. Due to global warming, the oceans are also warming up affecting this circulation, and with it, the
planet’s climate. Having calmer seas, it was easy today to repeat Jordi’s “seals” lecture and Belèn “from whaling to whalewatching”. Even after dinner we got the chance to attend Valerii’s presentation about his work during this trip.