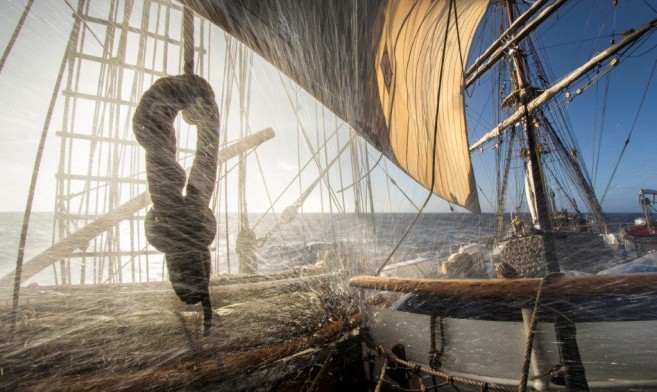 For four days Europa has been enduring the wild waters and winds motoring in a cloudy and foggy Drake Passage. Crossing the wide band of the Polar Front, we find ourselves in the Sub-Antarctic temperate climate area, while leaving behind Antarctica to the South. During the last day we experienced abrupt changes in the water and air temperature, which affects the weather. Often foggy conditions reign over this climatic instability area over the northern edge of the icy Antarctic waters and in the surroundings of the Convergence. But crossing this oceanographic and ecological boundary while sailing northwards, we experience a welcomed weather change, with a forecasted wind increase and direction change, clear skies and a starry night over our heads. Blowing at 25 to 30kn on a NW-ly direction once more, the Lower Staysails and Inner Jib are set again to help our engines on our northbound course. From a rest on the big swell during a few hours, now again growing seas make the Europa roll and pitch. The blue skies that all of us cherish, lasted until the afternoon, when several squalls and showers crossed our path, leaving behind a rainy night. It was then when we experienced a wind shift, with wind veering to the north, a good moment for tacking the few staysails set and brace around to starboard tack, changing from a northerly course to a more westerly one, gaining distance to get closer to the southernmost tip of the America’s. But this wind shift didn’t last very long and a couple of hours later we come back to the northerly course, tacking staysails and bracing again. With all this we try to speed up our approach (now just about 120nm left) to the Beagle Channel, where we plan to arrive tomorrow night, hopefully having the chance to set sail on our last full day at sea. For us, crossing the Drake Passage these last few days, seems like a long and hard time, but we just have to look behind at the past, when many parts of the world were still unknown and the expeditions and navigations were taking even several years in a row. The Europa counts with all the technology necessary nowadays for safely sailing around the planet. The coastlines and islands are charted, digital and paper charts fill several of our drawers and computers, we can count with good wind forecasts, communications with the rest of the world are available and in difficult navigation circumstances like the crossing of the Drake Passage during the last days, the autopilot can keep a steady course when manual steering becomes tough on strong winds and huge swells.
By the 16th Century it all was a very different story. Ships were much less reliable, they were lacking engines, the sailing was based on good seamanship, celestial navigation and dead reckoning. Isolation and lack of many facilities were the trademark of a hard life and on top of all many regions of the planet were still unknown and their waters uncharted. Amongst those areas, the mystery surrounding the high latitudes on the southern seas include these 500nm of rough waters between Patagonia and Antarctica, at the time, a continent still waiting to be discovered.  Actually, it was Ferdinand Magellan in 1520, after endless struggles, who found a way to connect the Atlantic and Pacific Oceans, through the Strait that nowadays bears his name. Nothing was known of the lands and waters south of this passageway until the year 1577, when England decided to start exploration of the southern hemisphere. Within the framework of this project, Sir Francis Drake departed for the South Pacific, having to use the Strait of Magellan to reach it. After being battered by storms and foul weather in Southern Patagonia, one of the three ships of his fleet sank and another, thought lost, sheltered from the most ferocious storm in the inner waters of the nowadays Chilean Channels. In an unexpected turn of events, his ship, the “Golden Hind” was blown out at sea, and threatened by the violent winds she drifted southwards, leaving the last known land behind. Winds had driven Drake to the discovery of open waters below Tierra del Fuego island, that challenging expanse of ocean now bearing his name, the Drake Passage.