Day of decreasing winds and calmer conditions. Starting in the morning with still 18-19kn winds backing to S-ly, coming a bit up and down, but enough to sail Close Hauled following the wind on a approximately 100º course at 7.5kn. That was time to set the Royals. 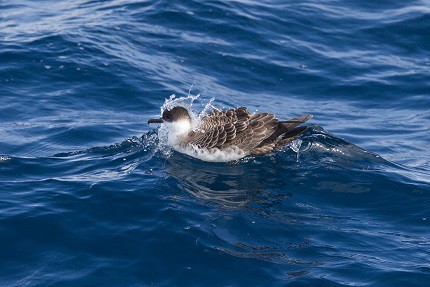 At this moment we were sailing with all canvas set but the Flying Jib, Gaff Topsail and Skysails, but as the morning goes by the wind dies down. At coffee time it blows 10kn from SSW as the Europa starts to slow down to 5.5 kn on a 090º course. By lunchtime we had just 5 kn of wind from the S as we sit almost just drifting between 1 to 2kn. At this point is decided to clue up all the square sails, take away Lower Staysails, Fore Top Mast Staysail and start the engine to keep a speed of 5kn.

Since then on we motor our way with just the Middle and Upper Staysails set, as the wind kept backing, from the SSE and SE later on. After lunch the permanent crew takes the good chance offered by the sunny and calm conditions to do an announced Man Over Board drill. Ruud throws a fender in the water and the continuous alarm is triggered as the Captain announces the drill to everybody through the speakers. Using the ship to approach the fender and jumpers to retrieve it, together with Tobi playing as victim once the jumpers and buoy are alongside the ship, all takes about 5 minutes. During the afternoon the wind keeps continuously backing and blowing at 6 to 7kn.

In this calm day at sea, crossing the South Atlantic, there were a few activities going on in the ship. Before the morning coffee time Megan has a walk around deck explaining again the secrets of setting andtaking away squares and staysails, and afterwards Jordi repeats his talk on “Working with Black-browed albatrosses” followed by the sad documentary “Midway” about the problems with the plastic in the ocean and its disastrous effects on the albatrosses populations of the North Pacific. Later on, after coffee time in the afternoon Ruud gave a full explanation on Ship’s Stability.

During the journey the permanent crew is also busy gearing up lines and blocks for the Studding sails that are planning to rig as soon as possible. The birdlife around the ship is has been remarkably abundant and interesting today. Since the morning flocks of Great shearwaters have been around us, following the ship, taking advantage of our apparent light wind, looking for something nutritious as we remove the water column as we advance and taking a rest sitting in the water when the wind is too light for them to glide. Also a couple of Tristan albatrosses have been spotted, together with Atlantic yellow nosed, the graceful all black Sooty and several adult and immature Black browed albatrosses.

The distance sailed from noon to noon has been of good 166nm, and still 1370nm to go. The variable, light and backing winds we are experiencing re related with a High Pressure system located North of us, passing by as we try to avoid falling too much into it, steering more ESE-ly. We all hope for an increase of fair winds in the morning, becoming stronger from a N-ly direction. Before midnight the wind had keep backing all the way, now blowing from the NE, when we decide to gybe, bracing sharp to Port tack and passing he staysails and head rig set to the other side as well. Like this we kept motoring, enjoying a relatively calm night under engine, where Captain Harko and his Mate Ruud decided to give holidays to all voyage crew, while the permanent crew take over the sailing and maintenance duties. Busy night in the bar until midnight as we all really appreciate having those hours off duty until 08:00h in the morning.