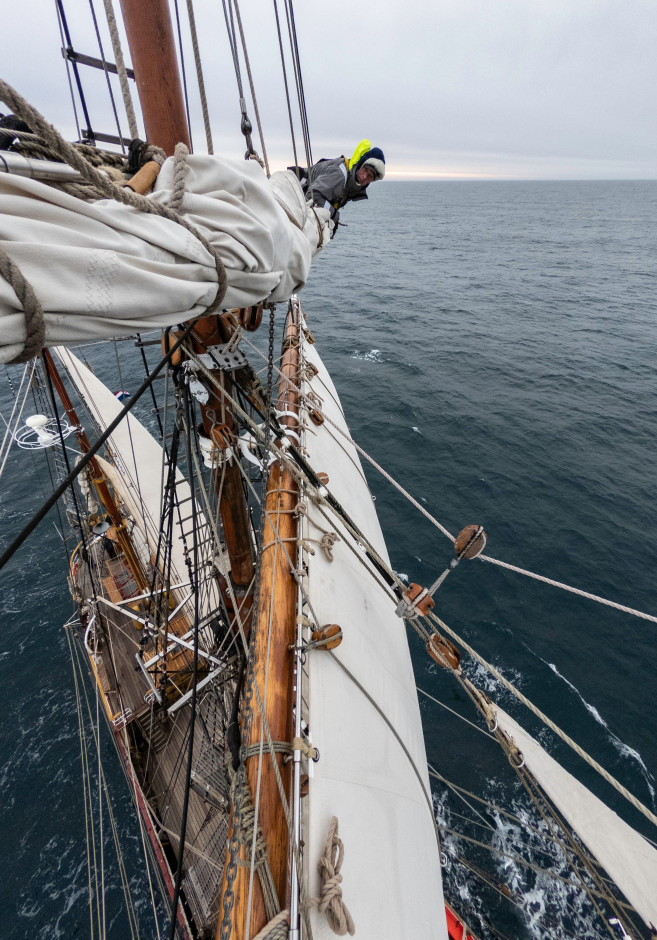 With South Georgia at our reach, winds eased down and turned on our nose. First braced Close Hauled on Starboard tack to squeeze out some more of the good sailing we had during last days, then it was time for the engines to be switched on and propel us towards the Island. Windless combined with long high swells are not the best combination for a comfortable ride. Europa rolls and rolls as during the day she eats away the last miles to the firsts lands to see and visit in about a week of sailing in the open ocean.

Before dawn, all squares are clewed up. Night and early morning watches pack them away, leaving only the head rig set, middle staysails, try sail on the mizzen and deckzbabber. Fore aft canvas just to provide a bit more stability against the rolling.

The nice sunrise gave way to a grey and rainy day, but the conditions were good enough to start preparing ship, crew and rubber boats for the upcoming visits and new adventures ashore, hopefully starting tomorrow. Not just this, but also it was a good moment for conducting a Fire drill, where the crew simulate extinguishing a fire, while voyage crew muster on deck, and all wait for instructions from the Captain and Mate. Good way to keep everyone sharp in case a real emergency arise.

Later in the evening, voyage crew watches ended. A good full night rest before arriving to South Georgia and exploring its unique landscapes and wildlife. For the last week we all kept the Europa sailing in a good course towards the island, waking up and crawl into our bunks at set times to which we are not used to in the life ashore. We performed lookout and steering duties. Some have climbed aloft to give a hand to the crew furling and unfurling sails, many have met on deck pulling ropes to set or take away canvas. A world apart, isolated from the hectic modern times tied to the media, to towns and cities, to job schedules. A world in which to realise that the only things we need are just here with us: good company, good meals every day, a warm sheltered place where to end the journey, a couple of square meters to lie down, an ongoing sense of adventure and some kind of activity that provide a feeling of accomplishment. By the end of the day, the goal of reaching South Georgia is just a handful of miles away. Darkness and the cloudy damp weather will not allow to spot nearby land until tomorrow morning, though the local wildlife is already about, seals howl and penguins squawk around the ship.

Thanks for the great update. Very exciting. Looking forward to hearing about S Georgia!

Thank you Jordi and beautiful foto.s