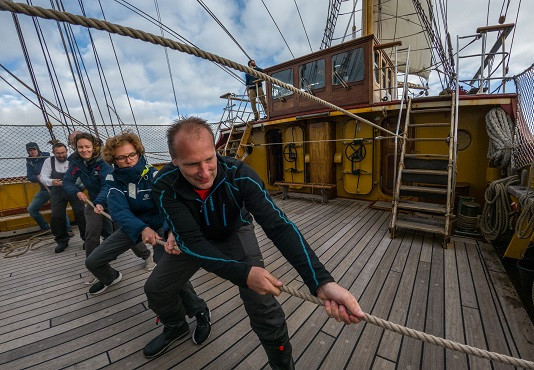 Since we passed by Tristan da Cunha, our course has brought us further to the South almost reaching again the 40ºS, where the Eastbound winds are steadier and more reliable conditions for sailing to South Africa can be found.
Usually, an atmospheric High Pressure remains quite stable Northwest of Cape Town. Falling into its center would mean having no winds for too long, better try to approach its Eastern boundary from a bit south and catch its winds expected to blow with a northbound component.

But plotting the course just having in mind the winds and atmospheric systems wouldn’t be enough for these waters.
Here, strong oceanic flows and chaotic eddies formation play an important role in the navigation and an eye must be kept on them. Plotted images of Ocean Currents and previsions of their movements join with weather and wind forecast for the voyage and itinerary planning.

During the present journey, the Europa has been sailing for most of the time under the influence of the Eastward flowing Circumpolar current and the belt of strong winds and Low-Pressure Systems highway of the 40’s, 50’s and 60’s southern latitudes. But now she starts feeling the effects of other water masses and weather systems too.
West Wind drift flow meets around this area with the northwards Benguela current and the disturbances produced by the Indian Ocean current of the Agulhas.

Benguela forms the eastern portion of the South Atlantic Ocean gyre and extends roughly from Cape Point in the south of the African Continent to about 16º South. The prevailing Southeasterly Trade Winds drive this flow that originates from upwelling waters from the cold depths of the Atlantic Ocean against the west coast of the continent. Already a pretty impressive mixing of water masses and their movements between Benguela and Circumpolar waters… now we had to add the presence of the impressive western boundary current of the southwest Indian Ocean, the Agulhas.

Narrow, fast, and strong, its relatively warmer waters flow down the East coast of Africa from 27°S to 40°S, reaching the southern tip of the continent, producing dynamic interactions there with the others. The most remarkable feature of this Agulhas current is that the larger amount of its water turns back on itself close to Cape of Good Hope, rejoining again the general circulation of the Indian Ocean, on a process called retroflection. We can imagine a large amount of turbulence and mixing related to the meeting of those three currents and their specific characteristics. One of the oceanographic features created by it is the release of eddies into the South Atlantic Gyre, where the Aghulas turns back on itself and the loop of the retroflection pinches off periodically. These swirls join the waters of the Benguela Current or are advected northwestward across the South Atlantic.

Benguela upwelling; Aghulas released eddies and turbulences close to the southern tip of South Africa; to the South, the Circumpolar Current. A conjunction of events makes this zone a highly oceanographically interesting part of the world. Rich cold deep waters surface feeding the phytoplanktonic blooms that are the base for the productive Benguela ecosystem. At the same time, the release of warmer eddies from Aghulas into the colder South Atlantic affects Ocean dynamics, marine productivity, surface waters properties, local currents, waves, and weather patterns.

Keeping a good eye on all those factors during the last days as we approach the African coasts is pretty essential for proper routing and a good final arrival to destination.
Following digital current charts and wind forecasts, we have been keeping a course bringing us to the East. First taking advantage of the good winds, then motoring for about a day and a half against light winds. First motor sailing under staysails, then sheeting them tight when the breeze comes more from our bow, afterward taking them down. A situation that changed this afternoon, when the moment arrived to change to a NNE-ly new course, with this new heading now the wind becoming a fair 12 to 15kn ESE-ly.

Gradually canvas is hoisted, engines are switched off and in a couple of hours the Europa sails away under full sail. Over 500nm in that direction Cape Town lies.