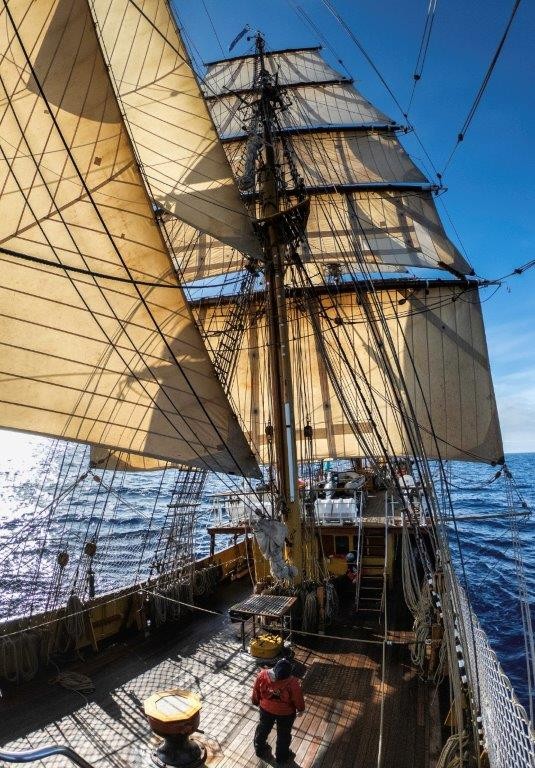 The light variable winds made for a bit of sailhandling during the start of the new day and following hours. Just by midnight the braces are pulled to Starboard tack, still under 12kn of NW-ly winds. But about four hours later the conditions turned to be good enough to set the courses that had been hanging in their gear, brace slightly to starboard tack, pass the staysails to the other side of the stays, and set again the lower ones. Like this we were able to turn the engines off and take advantage of the nice smooth sailing for a few hours. Keeping a 155º course Europa was able to maintain an average speed over 5kn, as a fair breeze blows from the WNW. As we sail south, we left behind the foggy area that seemed to cover the Antarctic Convergence with its steep changes in water temperatures. Now the skies clear up and the sun appears amongst the high clouds, leaving behind a sunny afternoon. The sea remains calm just affected by the low long swell and its surface water stabilizes its temperature just below 2ºC. The nice and fine sailing lasted until the end of breakfast, when we found ourselves once more in easing winds. The engines had to be switched on again to keep the average speed needed to reach the northern coasts of the South Shetlands Islands by tomorrow morning. Good and warm weather during the afternoon allowed the crew to continue
with several of their maintenance projects up the rig, while for the rest, we had a pleasant time hanging out on deck or joining the watches for lookout and steering under the blue skies. The calm seas also made for all to get over the last hints of seasickness and finally be around for the sail training and lectures offered. Our doctor repeated her talk about hypothermia and how to prevent it, relevant for the cold temperatures we are about to face during the next couple of weeks visiting Antarctica. Besides this more practical information to keep ourselves warm and hydrated to better enjoy what is happening as we sail the Drake and what is about to come visiting spots ashore, Nilla also repeated her lecture on the general world oceanic circulation, with special emphasis on the currents and water masses of the Southern Ocean and waters around Antarctica, and how they affect the global climate of the planet. Today, being the last day at sea on the Drake Passage before reaching
Antarctica, it was the time for the last preparations, including finishing the Biosecurity Procedures and attending the mandatory “International Association of Antarctic Tour Operators (IAATO)
Briefing”. Bark Europa, like all other tour operator companies working in Antarctica, belongs to that membership organization that advocates for environmentally friendly and safe touristic operations in
Antarctica. It sets the rules and a code of conduct for touristic activities, in the frame of the Antarctic Treaty agreements. The day ended by clewing up all the square sails, striking the staysails
and furling all the rig, under very calm wind conditions and surprisingly calm seas. We continue for part of the night motoring our way south towards Desolation Island, the site we plan to explore in the
morning. Located in the South Shetland Islands, north of the large and glaciated Livingston Island, it is in the area we plan to visit tomorrow and during the next couple of days and of great historical relevance to the early Antarctic era of exploration and discoveries, actually being the first land of the unknown “Terra Incognita Australis” that was ever sighted. In 1811, forty years after Captain James Cook circumnavigated Antarctica unfortunately without even catching a glimpse of land, but nevertheless concluding that there had to be a frozen Southern Continent, a group of 5 English businessman gathered funds to build a trading ship. One of them was William Smith, born 1790 in the coastal village of Seaton Sluice, and raised three miles further north in the port of Blythe (a toponym that give us a hint of the place name for tomorrow’s plans at Desolation Island, in Blythe Bay). The new ship launched in 1812 was named “Williams” and started trading with South America, with William Smith as Captain. During one of her trips in 1819, she was blown south off Cape Horn, ending up at about 62ºS where William sighted land, where it was supposed to be just water. After the controversial discovery, a year later a British Navy Expedition was put together to investigate these new lands, that have been baptized as “South Shetland”, since the Scottish Shetland Islands occupied an equivalent latitude in the north. Captain Edward Bransfield with William Smith and 43 crew sailed south from the Chilean city of Valparaiso, sighting Livingston Island on the 16th Jan 1820. They followed the northern coasts of the islands and landed south of King George Island, naming it after George III of England. Their discoveries led to a large-scale commercial sealing and whaling in Antarctic waters, which greatly affected the populations of those marine mammals. After years of indiscriminate hunting in South Shetland and Antarctic waters, we can consider ourselves pretty lucky thinking that nowadays their populations are recovering. And today we were witness of this process when along the journey several Humpback whales were spotted, distributed around a big area north of the South Shetland Islands, part of their traditional feeding grounds here in the high southern latitudes.